How Ireland can make the most of Asian opportunity 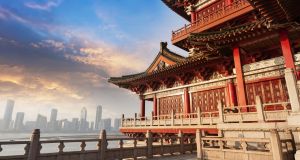 “China aspires to be self-sufficient, especially in the area of technology and will also have the world’s largest healthcare market,” PwC’s Enwright De Sales says.

According to the PwC World in 2050 Report, China could overtake the US to become the world's largest economy based on GDP by 2030, while India will move into third place by 2050. Indonesia and Vietnam will be other star performers.

“We will continue to see the shift in global economic power away from established advanced economies towards high growth economies in Asia,” says PwC tax partner, Enwright De Sales.

“With a population in excess of 4.4 billion, Asia provides great opportunities for Ireland to grow its current exports. In a post-Brexit world, Ireland has increased relevance for Asian companies seeking to access an EU market of over 500 million consumers.”

Prior to joining PwC earlier this year, De Sales spent the last few years working across Asia for some of the world’s leading financial and professional services firms. “The two major economic powers in 1750 were China and India – and we could return to a similar situation in the next 30 years,” he notes. “They are 15 years apart in their growth trajectory. China has arrived and will be the largest economy for the foreseeable future. India is on the rise and has the potential to see at least a decade of double-digit growth in the coming years. The other Asian economies like Indonesia, The Philippines and Vietnam are also growing at a fast pace.

They do face short-term challenges, of course, not least due to the incipient US-led trade war and the continued strength of the US economy. “When the US does well, money tends to flow out of emerging markets and the US is still viewed as the best market from an investor’s point of view,” De Sales says. He also notes that despite their fast growth, Asian economies still require extensive structural as well as other reforms and more inclusive growth.

China will continue to be a big outbound investor though. “What has happened in the last two years is an adjustment of where that investment goes,” he says. “The investment is definitely more strategic. Certain groups went on a buying spree a few years ago, buying up assets which were not strategic and impacting China’s foreign exchange reserves negatively last year. Future outbound investment will be aligned to core businesses - acquiring complementary businesses or technologies or setting up strategic operations in important geographies.”

Another important driver of Chinese outbound investment will be the “Belt and Road Initiative”. “This won’t touch this country directly, but Ireland can still benefit. It will involve a huge amount of spending on infrastructure and other developments and Ireland can play a role there.”

In terms of outbound investment, Ireland stands to benefit due to a number of factors. “China aspires to be self-sufficient, especially in the area of technology and will also have the world’s largest healthcare market,” De Sales says. “There is a definite focus on R&D and acquisition of technology. But it will not be possible to do all of it in China and they will look overseas. Ireland is seen as a success story in this respect and we will see Chinese technology companies coming here to use Ireland as a way to globalise. Pharma companies will come here as well as they see Ireland as a gateway to Europe post-Brexit.”

Brexit is also having an impact on Chinese outbound investment policy. “Traditionally they would have looked to the UK because of its market size and its position as a leading player in Europe. Ireland would not have been considered as a front-runner except for some specialised areas, like aircraft leasing, but this may not be the case post-Brexit. Ireland will be attractive as a European gateway for its ease of doing business, political stability, being the only native English-speaking country in the EU, talent pool and its corporate tax regime. It has taken a while, but we are beginning to see some traction. The last few years have seen the visits of the leaders of China, India, Japan and South Korea, which is an important signal to businesses in those countries. Ireland is also perceived as a friendly country with no negative historic legacies.”

Chinese pharmaceutical companies also have reason to find Ireland attractive. “They are very dominant in their domestic market, but they need world class R&D,” De Sales says. “The top companies understand that they have to go where the talent is and to countries like Ireland with major industry clusters. The WuXi Biologics decision to locate in Dundalk is the first of many other investments to follow in that space.”

The “Belt and Road Initiative” provides some interesting opportunities for the financial services sector. There will be lots of opportunities for structuring and financing projects in southeast Europe or Africa from Ireland - like aircraft leasing. Another area of opportunity is in design and construction with Irish firms exporting their expertise.”

There are other opportunities for direct trade with China and Asia, of course. “Food security issues and a growing rich population in Asia with changing food habits present opportunities for a country like Ireland with a very good reputation in that regard,” De Sales says. “China would like to diversify its food supply chain rather than be over-reliant on one or two countries and there is a big opportunity there for Irish food exporters. The EU-Japan trade deal will also offer opportunities for Irish exporters in another large and mature market outside North America and Europe.”

He has some advice for Irish firms with ambitions of exporting to Asia. “You have to break the Asian market down into different territories. It is not homogeneous and there are huge variances in culture, taste and spending power from region to region. You have to select your market very carefully and do a lot of homework. For example, in China, Beijing and Shanghai each have a population of over 20 million. All of the world’s top companies are there competing for a slice of the market. That makes them very tough to crack. Some businesses are skipping Tier One cities and going for Tier Two or Tier Three cities.”

His other piece of advice is to be patient. “It’s very long term and you are not going to make profits quickly. You have to go there regularly. Your customers have to see you. It’s very much about relationships and trust as well as having the right partner on your side.”

He is optimistic for the future of the two-way relationship. “We are seeing traction in both directions. The PwC network in China and Asia is working with a number of Irish clients to assist them enter new markets in Asia. We have a team of Asian language speakers with direct access to the market with on-the-ground advice. We are also working to attract Chinese and other Asian companies to invest in Ireland. The kind of companies we want to bring to Ireland are the best-in-class technology or the major pharma players and large conglomerates.”

PwC Ireland has the knowledge and experience to help you navigate the international tax landscape as you look to expand your business overseas. In a world of constant change, trust the leading voice in tax, and for more information, visit www.pwc.ie.