Powers ambassador, Michael Carr and Wayne Hegarty-Kelly of Roberta’s discuss the flavours of three Powers Releases and how best to use them in cocktail form 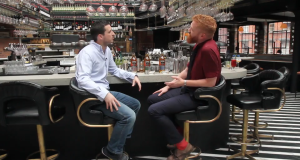 Powers’ position as one of the behemoths of Irish whiskey has been constant since its inception. Starting out in a distillery in 1791, just off Thomas Street on John’s Lane in what is now Dublin 8, it has gone on to become one of the go-to labels for connoisseurs of Irish whiskey worldwide, served neat, on the rocks, or with a splash of water.

However, Powers’ versatility as a whiskey means it also translates superbly to use in a variety of cocktails, which use the flavours of the brand’s various releases, combined with other select ingredients, to create something altogether different.

Powers ambassador, Michael Carr met with Wayne Hegarty-Kelly, bar manager of Roberta’s Restaurant Bar and Terrace in Temple Bar, to discuss the flavours of three Powers Releases – the Three Swallow Release, Signature Release and John’s Lane Release - and to find out how to get the most from them in cocktail form using recipe creations by Wayne.

The nose of the Three Swallow Release has a signature Powers spice which resembles a cinnamon spiciness, a note that runs right through the Powers range as its distinctive flavour.

“The nose on the Three Swallow Release is a robust nose with fresh citrus, green apple and fresh, unripened pears,” says Carr. “On the palette, it’s spicy on the tip of the tongue, but also rolls over the tongue with the heat felt in the chest, not the back of the throat. The green apple flavour is dominant, as well as candied banana.”

Three Swallow works perfectly to create a new twist on the Old Fashioned cocktail. Pour a measure of Three Swallow Release over ice, with some orange bitters, Angostura bitters, and add a pinch of sea salt to draw out the whiskey’s orchard fruits flavour. Finish with a sprig of mint.

“This creates a fresher version of the Old Fashioned,” says Carr. “The Old Fashioned is a very robust cocktail, but the sprig of mint is really refreshing and brings an interaction to your nose; when you taste the cocktail the mint rubs off your nose. The overall flavour gives you this very rich and robust, yet sweet and almost tangy flavour, that comes from the orange bitters.”

Powers Signature Release brings forth herbal and spicy notes, with a mellow nose and aniseed kick. This whiskey maintains the style of Powers, but with an extra spice of flavour.

“Where this one is different is that on the nose a much more herbal influence comes through,” says Powers ambassador, Carr. “There are hints of basil and bergamot and a herbalesque essence on the nose. On the palette you have the signature Powers spice, but it interacts with the tongue to fizz some heat across it, and stops at the back of the throat. Then you have the triple-distilled warmth of the whiskey down in your chest. Flavour wise you get aniseed and herbal notes coming through. There are also hints of slightly more mature fruit, like red apple. You also get the Powers spice and a little bit of barley crispness.”

Place three blackberries at the bottom of a cocktail shaker, add fresh lemon juice for bitterness and a small dash of sugar syrup to counterbalance the citrus acidity, as well as a dash of plum bitters. Add a measure of Signature Release and muddle all the ingredients together. Mix and shake with crushed ice, with a sprig of rosemary to finish.

“This is a super-fresh cocktail. The blackberries work really well with the slightly herbal notes of the Signature Release,” says Carr. “The fizziness of this release, combined with the blackberries, makes for a very fresh experience.”

The John’s Lane Release evokes flavours of chocolate and dark fruits, giving the taster a whiskey that packs a punch of deep, strong flavours on the palette.

“John’s Lane is a much darker whiskey. On the nose, dark fruits are prominent, as well as chocolate and a hint of cigar smoke,” says Carr. “It has a much more robust palette: the spice sits there and you can really feel it in your mouth. The whiskey sticks to the inside of your mouth and it also makes the mouth water. Flavour wise you’re looking at dried fruits, a hint of bitter, dark chocolate and there’s a really, really long finish on it, with hints of sherry. All the warmth is down in your chest, you don’t feel anything on your throat; it’s a very pleasing whiskey.”

Over a measure of John’s Lane Release, pour lemon juice, orgeat syrup, sugar syrup, Drambuie, and finally egg white - to bring some foam to the mix. Shake together with ice and serve with a few drops of Sandeman 3 Star Ruby Port on top.

“This is a super-smooth cocktail. The egg white gives you a smooth texture and that works really well with the mouth-feel that John’s Lane gives you,” says Carr. “It’s a cocktail that feels almost like ice-cream. Flavour wise there’s an aniseed taste coming through from the orgeat, but there’s also that dried-fruit flavour coming through from the John’s Lane, so it creates a beautiful balance. You have flavours that are very developed, but work together into this beautiful, smooth cocktail.”