For archivist Carol Quinn, a glass of Powers always brings with it the memory of the generations of people who produced it since it was created in Dublin in 1791 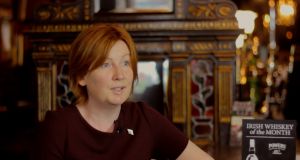 The whiskey-related stories of hundreds of Irish men and women are captured in the archives of the Midleton Distillery in Cork and protecting them all is archivist Carol Quinn. It seems an incredible job to be the guardian of centuries of records of some of Ireland’s most famous whiskey distilleries. “There are boxes and boxes of records that I haven’t got to open yet,” she explains, as she talks about the archive building in Midleton where the entire records of Powers were brought when the distillery moved from John’s Lane in Dublin to Cork. “As we work our way through them we’re discovering more and more about this great whiskey family, their role at the heart of Dublin and the people who worked for them.”

We’re in Dublin’s Long Hall pub, a business older than Powers itself at just over 250 years and probably one of the Powers family’s first customers, she suggests. It’s a fitting place to begin the Powers Dublin story. The once world-famous distillery of John’s Lane has moved from its Dublin base where it spent nearly 200 years but its mark on the capital is still there for everyone to see. Behind her on the wall is one of the Powers mirrors provided by the distillery at the height of its fame and as striking today as when it was first installed.

Quinn produces a copy of an original Powers receipt outlining the repair work carried out on the mirror in the early 1900s, a single document that links this great Victorian pub with its past. “These mirrors were installed in all the best-known establishments in the city and were repaired and cleaned regularly to keep the Powers name pristine. They went to great lengths to protect their brand image and many of the great Victorian pubs of Dublin still have their Powers mirrors on show today.”

Nearby is the site of the Drury Street bottling hall which was where many of the female workforce were based and it was from here that Powers would have been sent out all over the world. Powers were immensely proud of their Irish heritage, she explains. “They went around the world in a fearless way and full of pride for their Irishness. They knew they were making a product that was world-class.”

At that time the distillery at Johns Lane (in what is now Dublin 8) was the one of the biggest and most modern in the world. It employed hundreds of people whose stories come to life as Quinn reflects on the brand.

From the documents in the archive she can identify the lodging houses in which they lived, the rules set there for them, how they worked, what they wore and ate. The level of detail she holds on their lives is fascinating. She talks with pride of their place in Dublin life and the shape it had on the city and she is captivated by the idea of what the distillery must have been like when working at its peak.

There’s a self-guided walking tour on offer at the site of the distillery today, one that Quinn herself was involved in creating. She likes to think that, like her, visitors today can still imagine the workers entering through the archway of the old distillery building, walking down through the warehouses and workshops and how they must have felt pride to be involved in the creation of this global brand.

At the centre of the site stand the original Powers whiskey stills. She reaches out and touches the bricks that surround them. “When I come here I think of all of the hands that were involved in the making of the whiskey and I think of the lives that they spent here. So many generations who worked so hard would be delighted now to see people again rediscovering the quality and the specialness that is Powers whiskey.”

“I do feel the weight of history when I drink Powers. It’s like a sleeping giant and I do believe that it’s going to be a colossus of Irish whiskey again, the way it once was.”