With more than 200 years of heritage, Powers Whiskey retains its status as one of Ireland’s most iconic whiskeys. Here are some of the reasons why 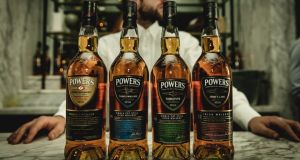 Powers Whiskey remains one of the best known whiskey brands in Ireland. It’s rare that a bar anywhere in the country doesn’t have a bottle of Powers Gold Label or one of the other Powers releases on its shelves. Renowned for its depth of flavour and elegant finish there are four expressions of Powers: Gold Label, Three Swallow, Signature and John’s Lane. Each has its own distinctive characteristics but each also link back to the original style created by its founder back in 1791.

THE DISTILLERY
Powers was founded at John’s Lane Distillery off Thomas Street in Dublin city centre in 1791. At its height the distillery was one of the most modern in the world and was renowned for its forward-thinking work practices, international reach and, of course, great whiskey.

THE STILLS
The site that housed the Powers distillery is now home to the National College of Art and Design and you can visit the site and take in a self-guided distillery tour. A high point of this is finding that the original copper stills that produced the renowned spirit are still there, visibly linking this great historical site to its past.

THE FOUNDER
James Power was the founder of Powers but he doesn’t always get the credit. He was an innkeeper by trade and like many publicans of the time he distilled his own whiskey which quickly proved popular, sowing the seeds for the distillery he built. However, it is his son John’s name that is immortalised on the famous gold-coloured label and the son in its name (John Power and Son) is James’s grandson, also called James.

THE LABEL
The label on Powers Gold Label is one of the best-known among Irish whiskies. It was designed to stand out from the crowd and celebrate its position as a premium Irish whiskey. The gold colour used was the most expensive you could find at that time and it was made from ground bronze. The Powers diamond was created as a stamp of authenticity. The gold label was also a sign that that particular bottle was bottled in John’s Lane. If a publican bottled their own Powers from a cask then the label they used was white.

THE WORKERS
Whiskey production in the 18th and 19th century was largely seasonal. Workers came from all over Ireland to work in the distillery and many of them were agricultural workers. As they were skilled in working the land it made sense that workers would try to save money by growing their own crops. But with agricultural land in the city being so scarce some workers requested to be allowed to farm on the rooftops of the distillery warehouses. The family agreed and many different crops were grown there over the years, one of the last being a field of hay.

POWERS UNITED
In the 1900s the company established its own football team – Powers United. This was just one of a number of notable staff incentives that included worker days out on the Powers family estates and annual trips to the beach.

THE BABY POWER
Powers invented the world’s first miniature with the Baby Power. When it first launched it was sold with a tiny corkscrew as the whiskey then was bottled with a cork.

WORLD’S FAIR CHICAGO
In 1893 a team of craftsmen travelled from Dublin to the Chicago World’s Fair to build a replica of the O’Connell monument in bottles of Gold Label. It was a symbol of the importance of the brand at that time and a great opportunity to showcase the craft at the heart of the brand.

GLOBAL REACH
At its height, Powers was the most popular brand in its category. It sold in markets all over the world from Egypt to the US to Paris. The dominance of Powers in international markets was incredible and now that Irish whiskey is enjoying a global renaissance Powers is perfectly positioned to put itself back on the world stage.