How one Pfizer branch is supporting its local community, children's charities and the environment 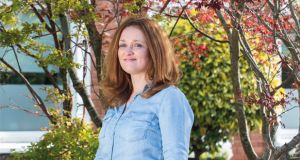 Clare Murray: "We wanted to link community with volunteerism and charity"

Good corporate citizenship requires a business to be not just a good neighbour, but to make a positive contribution to its community. One of the ways Pfizer does that is through suppporting local communities and charities including Mary Mount Hospice in Co Cork.

Link is an initiative which promotes social and charitable events that benefit the community and the environment, with the added bonus of helping to connect colleagues across various departments.

Helping to organise it was an important part of life at Pfizer for Clare Murray, an environmental analyst, who has worked in the Pfizer Little Island’s Environmental Health and Safety Department for five years.

Certainly, she was well placed to do it. “I have a background in conservation, marine science and environmental science,” she says, explaining how Link came about.

“A small team started Link in 2015. We came up with a name and what it would stand for. We wanted to link community with volunteerism and charity while adding a social aspect and cross-departmental involvement,” says Murray, who ran Link for almost a year before handing the reins to a colleague, Niamh O' Donovan, and going off to start a new Green Team initiative, in collaboration with the Link team.

“There is an overlap. Link has a charity, social and community role which includes the environment. I have a conservation background so that’s the area I like to focus on, so I set up the Green Team last year and run all the environmentally focused projects with Link.”

In April, Pfizer’s Green Team and Link collaborated to mark more than 40 years of work at Little Island with the design and creation of wildlife signs which were presented to two worthy recipients and erected in two locations of natural beauty: Cuskinny Nature Reserve and Fota Scout Centre, on Fota Island.

“The wildlife sign depicts some of the local native species of estuarine plants and animals in Cork Harbour and their names in Irish. We also donated a poster version to more than 12 schools in the Cork area,” she says.

The Link and Green Teams recently held a Citizens Science Project for primary school children. It included a workshop to educate students about the work of Coastwatch Ireland. “The aim was to inspire students to get involved in environmental protection, through not just the presentation but hands-on activities such as a beach clean and a rocky shore survey,” she says.

Beach cleaning has been a favourite of the teams since 2015, including on Little Island. This work ties in well with An Taise’s Clean Coasts Programme, which Pfizer supports.

“In April 2016, a guest speaker from An Taisce hosted a talk about how Pfizer Little Island could get involved in corporate volunteering, and the positive and immediate impacts they could achieve. After, a team from the site travelled to the adopted shoreline to participae to clean up. Since then more than 40 colleagues have been involved and a substantial amount of rubbish has been removed from the area,” says Murray.

The adopted site is in Ireland’s largest harbour, Cork, an important sanctuary for wildlife and a designated Special Protected Area.

Meanwhile, the green team and Link are involved in a project on-site to encourage colleagues to learn about native plants and biodiversity through a planter competition. “All departments were asked to design and grow planters for the garden with a theme reflective of native Irish wild plants and flowers, with a focus on the senses, biodiversity and pollinators. The planters will form part of the sensory garden that will be developed onsite over the next year,” says Murray.

“We are collaborating with Scoil Inse Raithne and building a sensory garden from materials that we use onsite.” Pfizer’s Link initiative encourages a positive workplace. It helps raise awareness of environmental, community and social projects. It supports staff who want to contribute to their community and it helps make the company a better place to work through the opportunities it affords to engage in positive actions and fun events. Particular notice should be given to the likes of Niamh O' Donovan and Antoinette O'Flaherty for the work they have put in to ensure its success.

Tony Nation, a Pfizer employee for almost 30 years, is the Production Day Supervisor at Pfizer Little Island, has a passion for the outdoors. “Working in Pfizer LI has enabled me to work on my passion for the outdoors. I am a member of the Link team, Green Team and Safety Team on-site. It was great being part of the team delivering Gairdin Beag and the children's garden. At present, we are planting 180 red robin plants on site to replace the laylandi that we removed. These plants have a better impact on the environment and wildlife.”

In June 2017, as part of a Link sustainability awareness event, Link raised funds through recycling Lego and clothes, turning it into cash for the Jack & Jill Foundation. The result was 10 hours of home nursing available to the families of sick children.

Internationally, Michael Falvey, one of our colleagues in the Link Team has been actively involved in Chernobyl’s Children Trust driving a lorry to Belarus with humanitarian aid and medicines. Link has supported by fundraising and collecting medical supplies such as nappies that are in short supply and cash donations over many years for transport and insurance expenses.” Falvey recalls his first trip to Belarus in 2004, “after seeing for myself what the conditions were for the children of Belarus in the aftermath of the Chernobyl disaster I was inspired to help and provide aid and support for the organisation. Pfizer Little Island supported my convoy trips over the years to deliver much needed supplies to these devastated communities, hospitals and orphanages.”