The Ingredient Series: Neff are celebrating the quality and confidence of Irish local food producers – in the second part of this series we meet some of the country's best 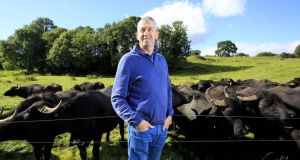 One of the best compliments mozzarella maker Johnny Lynch ever received was from Italian tourists to his farm who said his Macroom buffalo mozzarella was better than Italian mozzarella.

“People from Italy have come on our farm tours and they say, “No, it can’t be as good as the stuff from Italy,” and they taste it and eight out of 10, if not more, would say, “Yes, it is ahead of the stuff that we have at home,” says Lynch.

Macroom Buffalo Cheese Products, Co Cork has Ireland’s only milking herd of water buffalo. The company produce a variety of cheeses including mozzarella, ricotta, Greek-style salad cheese and halloumi. The drastic change from dairy cows to water buffalo was not taken lightly but Lynch knew that the price of milk was so low, he could not sustain the farm without change.

“It was very, very tough being a dairy farmer and in 2009 milk prices were so low that we weren’t making any money. So we either had to stop and lease out the land, or else go into something completely different,” says Lynch.

The origins of the company were established when Lynch went to Italy in 2009 to learn how mozzarella was made, and the same year his Italian water buffalo herd arrived onto their new home, a 150-acre west Cork farm. There were some very tough years, including when Lynch had to deal with cancer (he is now fully recovered).

Since 2015, Lynch is making the mozzarella on the farm with the help of renowned cheese maker Seán Ferry (praised for his former cheeses Desmond and Gabriel) and Lina Racine, formerly of Bord Bia. That same year they landed a major contract to supply Aldi, followed by other major retailers, and they haven’t looked back. “We are going from strength to strength.”

Valerie Kingston runs the renowned Glenilen Farm with her husband, Alan. One of the things she is most proud of is that their products retain the authentic, wholesome taste from when she first started experimenting with milk from their west Cork dairy farm in her kitchen.

“I grew up on a dairy farm and I was used to producing our own food. I studied food science and technology in UCC. My first job was in Dairygold in Mitchelstown and I spent four years there in research and development.”

She married her husband, dairy farmer Alan, in 1997. Kingston was always a keen cook and when her friend who was baking cakes for a local country market suggested Valerie join, she never looked back. She had no idea that her “experiments” using the milk from their farm near Drimoleague would become an international success.

“The reaction was really encouraging. I bought two large saucepans. Then one Friday I made over £100 from the two saucepans of milk and a bit of baking. That was the eureka moment for Alan and he rowed in behind me.”

The quality of the milk is imperative to each product and all the milk used is sourced from Glenilen and neighbouring farms. “Our benchmark is that everything that we produce today must taste the same, if not better, than what we first produced in the kitchen.”

Like the best food producers, Graham Kearns from Kearns Foods is passionate about detail. Located in the heart of the Boyne Valley near Slane in Co Meath, his range of condiments includes mustard and horseradish sauces that are produced using traditional methods. These methods may take longer, but achieve his desired result: a high-quality product with delicate and sophisticated flavours.

When he decided to expand the range from wholegrain mustard and create his own Dijon mustard, he travelled to Dijon in France to ensure he got it exactly right. For his horseradish sauce, he used a recipe that has been in his family for generations that is made up of 55 per cent horseradish.

Kearns studied politics and economics in UCD before studying for a Masters in International Business in Smurfit College. He always knew he wanted to run his own business, he just wasn’t quite sure what that was.

He worked for three years at Ernst and Young and qualified as a chartered accountant, then Kearns decided that he was going to produce a condiment. His wholegrain mustard came from trying to recreate his grandmother’s recipe. It was such a hit that he decided to take it to the local market, and the business was born.

“I remember thinking that with mustard and other condiments, we could do a better job than what was out there. We thought more effort with the ingredients would actually make a huge difference. A lot of mustards and horseradish sauces play to the middle ground. We had this idea that if you buy it then you wanted it to really taste like that.  We launched in 2015 with Dijon mustard, wholegrain mustard and horseradish sauce. We also have a thyme-based mustard and a steak mustard.”

The best food products taste, naturally, like where they have come from. Irish Atlantic Sea Salt tastes of the cool, pure Atlantic waters it is harvested from by hand by owners Michael and Aileen O’Neill.

The husband and wife team have been lovingly producing Irish Atlantic Sea Salt flakes at their home on the beautiful, wild Beara Peninsula in West Cork since 2010. Their process blends the best of modern energy-efficient methods with traditional salt-making techniques to ensure premium quality.

“My late father-in-law, Bernie, came up with the idea for the company. He approached us about it and initially we dismissed it. Then we thought about it, and said yes. We started messing around trying to perfect a salt flake first. We saw we could produce it and realised, “Wow, it has a lovely taste, too,” says Aileen O’Neill.

Michael was a fisherman and farmer so the couple started production by converting a shed on their farm. It received great feedback and they have since been expanding “organically,” and now employ two other people.

“The pure waters are what makes our salt taste so unique. We harvest from the Grade A water we have here and produce our salt at a very low temperature so we retain all the naturally occurring minerals and nutrients. Highly manufactured salts use a more intense technique so you get that really bitter taste. Our salt is 100 per cent pure, natural and organic, without preservatives or or additives. All that we add is time, love and care.”

They have won many awards, including Great Taste awards and their range includes the original salt flakes and flavoured salts: Oak smoked, Chilli and Paprika, Lemon and Pepper, Aromatic Garlic and Dillisk (seaweed). The products are available in Musgraves, SuperValu, Dunnes, Tesco, Avoca and independent retailers.

Neff and the importance of Irish food producers

As a brand, Neff is deeply passionate about quality food and the inclusive nature of cooking as a whole.

Ingredients are incredibly important and, furthermore, what’s so interesting is the story of where the produce comes from, how it is grown or produced and why someone chose to do it in the first place.

Neff is privileged to have so many outstanding food producers in Ireland and even more fortunate to get to work closely with their ingredients on a daily basis in its Dublin showroom.

Neff is partnering with seven Irish food producers from various food categories and their chefs cook with their own ingredients at Neff’s weekly cookery demonstrations. All of the producers are incredibly passionate about quality food.

There is such a strong foodie community in Ireland and, perhaps because of the size of the country, quality food is also so accessible. It’s the people and the story behind the food that makes the food so special.

Neff cooking appliances are designed by cooks for cooks. We strive to understand what our consumers want and incorporate that into the design process. The products are engineered to make the most of your culinary creations. Neff do this by building simple-to-use, innovative products, with additions such as added steam or microwave in our new ovens.

On top of this, Neff ovens come with CircoTherm, which is a fan design that delivers faster cooking capabilities. Neff also offers the unique Slide & Hide door that is the only one of its kind.

Most importantly, Neff aims to be a brand that enhances the consumers’ everyday cooking experience at home, one that is shared with family and friends.