The winners were revealed at the gala awards ceremony which took place as part of SeaFest on Thursday, June 29th at the Radisson Blu, Galway 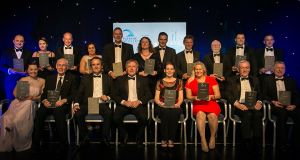 Launched in 2015, the Marine Industry Awards has established itself as the premier event in Ireland for showcasing the outstanding excellence and innovation in Ireland's marine sector on a national scale.

19 trophies were awarded at the ceremony across key areas of the Irish marine industry.

Gavin & Doherty Geosolutions were prominent on the night, winning the Professional Services Award and the Overall Marine Excellence Award. “We were delighted to win the awards. Our offshore/marine team has been very busy over the past year working on a number of very exciting projects across the world. These awards are a testament to the hard work and technical excellence of our team. We believe these awards are a fantastic recognition from our peers of the excellent services and innovation we have been providing within this sector,” said David Igoe, senior geotechnical engineer at Gavin & Doherty Geosolutions.

Sea Synergy Marine Awareness & Activity Centre took home the award for Marine Tourism & Leisure Operator. Speaking about the night, Lucy Hunt, founder and managing director of Sea Synergy Marine Awareness & Activity Centre said, “it was an honour to win the award when up against some of the best marine tourism operators in Ireland. It's also great that the tourism activities and work we do in connecting people with the ocean in a fun and meaningful way is recognised as being important. Connection and awareness is key to a more sustainable society.”

Sean O’Donoghue, CEO of Killybegs Fishermen’s Organisation, received the Marine Industry Leader 2017 in recognition of his outstanding contribution to the growth of the marine industry in Ireland. “On a personal level, I’m honoured to have been chosen as Marine Industry Leader 2017. I would also like to congratulate the other very deserving winners. When accepting his award, O’ Donoghue spoke passionately about the necessity of the industry to not ‘lose sight of the fact that these are particularly challenging and unprecedented times for our sector’, referring to the negotiations the Irish government is facing as a result of Brexit. “We cannot over-emphasise how important it is that trade negotiations are inextricably linked to fisheries at all times.” Speaking about the impact Brexit will have on Irish fisheries, O’ Donoghue highlighted his concerns that, “without access to UK waters, we are extremely vulnerable”.

The Excellence in Marine Research Award went to MaREI Centre for Marine and Renewable Energy. “I am delighted to receive this award on behalf of the MaREI Centre. The Centre continues to grow and represents six institutes across Ireland, employs over 180 researchers and has over 45 industry partners. This latest success reflects the cutting edge and impactful research that we are carrying out across the marine, marine renewable energy and renewable sectors,” said Prof Jerry Murphy, director at MaREI.

An independent panel of recognised, expert Judges, led by judging coordinator, Conor Mowlds, head of the National Maritime College, determined the winners of the Marine Industry Awards. Speaking about the night Mowlds said, “the standard of the entries for the Marine Awards never ceases to impress me, the level of detail I see every year, the innovative ideas and forward thinking that underpins each entry is the reason, I have no doubt, that Ireland’s marine community is so important to this island nation. The awards ceremony was a great success again this year. As an integral part of SeaFest, it’s become an annual focal point for the industry players to gather and recognise what’s best in our industry.”

Dermot Clohessy, board member of the Marine Institute spoke about his role as a judge at this year’s awards. “What impressed me the most about all the entries was the way they demonstrated creative innovation across the various categories. The risk taking, the dedication to making their ideas work and their businesses succeed was very impressive. Equally the quality of the research and the support services based entries that underpin the commercial contribution that the marine sector is making to the Irish economy were commendable in the 2017 marine industry entries. The awards ceremony was a night where the industry came together to collectively celebrate its achievements and demonstrate its confidence in the marine economy’s opportunities.”

The Marine Industry Awards offer a unique opportunity for people in the sector to enjoy a social night out together whilst celebrating their achievements among their peers and colleagues. Some of the biggest players in the marine sector were present on the night. “The Marine Industry Awards is the highlight of the SeaFest events programme each year and the IMDO is proud to be supporting companies, large and small, that are contributing to the growth of our marine economy in innovative ways. This year’s event was a great success with deserving winners from all over Ireland receiving recognition for the creative ways in which they have achieved success from Ireland’s ocean opportunities,” said Liam Lacey, director, Irish Maritime Development Office.

When speaking about his involvement in the event Declan McDonald, advisory partner at PwC said, “the awards are a great occasion to celebrate and acknowledge everything that is happening in the marine sector and PwC are delighted to support it. It complements our involvement with the Oceanswealth Summit in SeaFest and it is great to see the focus on the marine year-on-year. Congratulations to all the award winners and participants, it’s fantastic to see so much innovation across the sector and we certainly look forward to being part of the continued growth of the blue economy in the years ahead.”

Below are the winners from the Marine Industry Awards 2017.

18. Excellence in the Provision of Professional Services to the Marine Industry
Winner: Gavin & Doherty Geosolutions

The Marine Industry Awards will return in 2018 with an expanded format and judging panel.

The awards were devised and organised by Business River and produced by Event Strategies.