Fewer women in the boardroom reduces debate that can lead to innovation, says Siobhan McAleer of the Irish Management Institute 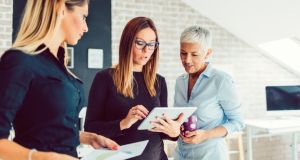 Women face a unique set of challenges when progressing into senior leadership positions, including a scarcity of role models and a peer group that shrinks the higher you go. Photograph: iStock

The traditional all male management line up isn’t just bad for women, it’s bad for business. “Fewer women in the boardroom reduces debate that can lead to innovation,” says Siobhan McAleer, commercial director at the Irish Management Institute (IMI).

It’s a fact that was recently emphasised by the Taoiseach, Leo Varadkar. Speaking at a conference organised by the 30% Club in Ireland, part of an international voluntary organisation committed to bringing more women into senior roles, he said: “Gender diversity in the boardroom is good for business. It leads to better decisions, reduces the risk of group-think, and improves overall financial performance. Companies which are stuck in the past are not equipping themselves for the future.”

Yet, despite the fact that girls outperform boys in the vast majority of subjects at Leaving Cert, that more women have third-level qualifications than men, and that women are entering the workforce in greater numbers than ever before, at the top levels of business women are still most remarkable for their absence.

Currently, representation of women at boardroom level in Ireland is just 12.5 per cent, far behind the US (23 per cent of S&P companies) and the UK (28 per cent of FTSE100 companies).

Research from the IMI shows that having fewer women in the boardroom not only reduces the intellectual debate that can lead to innovation, but that homogenous organisations produce less creative results and have poorer overall communications than those with diverse and gender balanced teams.

This is an issue that goes straight to the bottom line: in the US, those Fortune 500 companies with the highest representation of women at board level outperform those with the lowest, as measured by return on equity, and return on sales (by 53 per cent and 42 per cent respectively).

So why are businesses losing good women in the “leaky pipeline” to the top?

It’s an area the IMI is taking a lead in addressing. One of its newest programmes, Women in Leadership, helps both organisations – and women in management looking to take the next step up – to unlock their potential.

The programme helps identify the unique set of challenges that women often face when progressing into senior leadership positions. Often hidden barriers, these include unconscious bias (where those making the selection unthinkingly favour those that are like them), a scarcity of role models, and a peer group that shrinks the higher up the career ladder they progress.

These challenges can make striving for the top a lonelier and more frustrating endeavour for women than for men, even in organisations that are committed to supporting their top female talent.

“We are conscious that this is as much a male issue as a female one but women have particular issues that aren’t always addressed in a room, including the self-limiting assumptions that women can sometimes make,” says the IMI’s Siobhan McAleer.

“The fact that there is now such a lack of talent available to employers makes it a business issue and a societal issue, whereas for many years this was thought of as a women’s issue.”

Less than 12 per cent (8 of 68) of plc board appointments in Ireland last year were women, according to analysis carried out by the 30% Club in Ireland.

Its annual Women in Management research report found that while almost half (48 per cent) of junior management roles are held by women, less than one-third of executive directors are women. According to the research, the percentage of women holding CEO positions in Ireland currently stands at 19 per cent.

Consistent with international research, its findings continue to show that women in Ireland progress to higher levels of management under a female CEO rather than a male CEO.

“As well as seeing 30 per cent of women on boards, we are also focused on growing the pipeline of women in management,” says Carol Andrews, managing director, BNY Mellon and Ireland Chair of the 30% Club.

“Executive education is a powerful tool in building a career. Taking the Lead is designed to help women understand their vision and goals, empowering them to think about how they might change things in their career. Women have traditionally not been good at networking to build their careers so there is an important networking element to the programme too.”

[To find out more about Taking the Lead, visit imi.ie]

Networks, role models, mentors and sponsors can all help women bridge the confidence gap. “Females have traditionally been more likely than males to cite confidence as a barrier to career progression, but I think that is changing. Individuals are not citing confidence as much as they used to, but firms will still tell us that women are not putting themselves forward for the top roles,” says Andrews.

Last year the IMI organised a focus group of more than 50 women in senior leadership roles in Ireland. The insights arising from it form the basis for Taking the Lead. The four-day programme is designed to help participants develop the skills they need to accelerate their leadership capacity by overcoming inhibitors to career success.

Much of the value of the programme comes from the fact that it includes a coaching conversation which uses psychometric testing and 360-degree reviews, including feedback from managers and peers, to help establish a person’s leadership style. “It’s not just about identifying gaps, it’s to also be able to say, I’m really good at X or Y, and working with people to help bring those strengths out,” says McAleer.

“It’s really suited to people who want to move to the next level in their careers as well as for those who are asking the question and thinking about moving into more senior roles.”

The business case for encouraging women – and organisations – to explore the barriers to female leadership, without being afraid to draw attention to issues such as gender or family commitments, is now clear. That in itself is progress, given that 20 years ago research showed people would far sooner lie and say their car broke down than reveal they were late to work for childcare reasons.

“I think the conversation has changed,” says Carol Andrews of the 30% Club. “It’s okay for women to talk about their kids because it’s okay to be yourself, to be authentic and have that integrity. As the mother of a seven-year old, I’ve been very careful around articulating my expectations around my career. I’m not afraid to have that conversation. Those days have gone,” she said.

To find out more about Taking the Lead, visit imi.ie