Life assurance: families are at risk in under-covered Ireland

When it comes to protecting ourselves and our loved ones financially, Ireland is undercovered 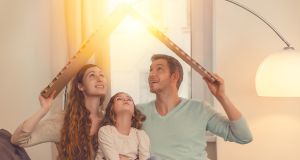 Could your family cope with a sudden loss of income in the event of illness or death? The realisation that many of us couldn’t is why we protect our family’s financial future with life insurance. But new research from Irish Life suggests too few of us are doing it, leaving us just months away from not being able to pay the bills. When it comes to protecting ourselves and our loved ones financially, Ireland is undercovered.

One in two adults in Ireland don’t have life cover at all. That means 360,000 families are without cover and almost half a million children in Ireland have parents with no life cover. Two in five claim their household would struggle financially should their income be lost through death, illness or injury. Working adults say they could only survive for six months on average in the event of a death, an illness or injury.

“Our research tells us that one in every two people put the issue of family protection on the long finger as they have just not thought about life insurance or have not got around to it or they don’t think they need cover,” says Sarah Kelly, senior manager for protection in Irish Life.”When they actually think about life insurance they usually come to the conclusion that they need to do more to protect their family’s financial future.”

There are psychological factors at play too. What behavioural scientists call ‘hyperbolic discounting’ is a big barrier, encouraging us to focus on the here and now. “People are naturally hardwired to prioritise the things that pay off today rather than tomorrow. Hyperbolic discounting is used to describe this mindset when it comes to money matters. People often automatically think that their money is better spent on today’s rather than tomorrow’s expenses, “We are literally hardwired to obtain immediate gratification, even if it’s undermining our long-term financial well-being,” says Kelly.

“And of course no one likes to think about death and illness, even though everyone knows someone who has had a serious illness or death in their family.” Ironically, by taking out a policy that protects your family in the event of death or serious illness, “you are actually giving yourself peace of mind in the here and now,” she points out.

[For one thing less to worry about go to irishlife.ie to find out more about Irish Life Family Protection.]

Less than half of women in Ireland have some form of financial protection, compared with two thirds of men. The figures hold not just for life assurance but for specified illness cover (which protects you in the event of a specified illness such as cancer, heart attack or stroke) and income protection (which protects you in the event of any illness that keeps you from work).

“It’s worrying to see such a stark lack of financial protection for women in Ireland. It’s really important that women take time to assess their own financial protection needs and what they can do to protect themselves and their family against any unexpected events. Very often this is forgotten about or even delayed due to the hustle and bustle of everyday life. We need to make women in Ireland more aware of the real benefits of life and specified illness cover, as it can be a lifeline for them and their families in times of difficulty.”

We pay twice as many claims for things such as being seriously ill or unable to work through accident or injury, as we pay for death claims. Last year overall 4,500 of the 6.500 claims we paid to families across Ireland helped them with lump sum payments following serious illness or helped provide a regular income and pay bills if they were out of work through accident or injury,” says Kelly.

That’s a huge comfort because as an employee you can lose salary benefits sooner than you expect. After that “you are on State disability benefit, which is worth thinking about,” says Kelly.

For one thing less to worry about go to irishlife.ie to find out more about Irish Life Family Protection.

Irish Life Assurance plc is regulated by the Central Bank of Ireland.

Get fit for life with MyLife