Stimulating debate, sharing best practice, and powerful presentations on offer at the Future Health Summit, this May in Dublin 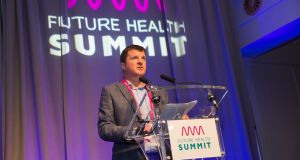 Now in its 18th year, this year’s Future Health Summit has as its overarching theme “The Future of our Health”, and a range of national and international speakers will be aiming to provide delegates with their expert insights into what that might look like. Topics such as mental health, integrated care, public-health systems, community care services, life sciences, and medtech will be explored over the two days of the conference, which has become a landmark event in the calendar for all those interested in healthcare policy and practice.

Tickets are selling fast for the event, which will be capped at 600 attendees. The Future Health Summit has expanded significantly over the years as interest grew both nationally and internationally.

Yet the event is now more laser-focused, with the goal of being the must-attend event for key decision-makers in healthcare, explains David Neville, chief executive of Investnet, the event’s organisers. He is also keen to emphasise that while this is ostensibly an Irish event, the scope is much broader than that.

“It happens to take place in Dublin, but really it is an internationally-focused event,” says Neville. “The ethos behind the event is to bring in people from around the world who share best practice and innovations in healthcare. Initially, it would have just been an Irish audience but now the proportion of international attendees has tipped 50 per cent, even 60 per cent.”

This is reflected in the stellar line-up, with more than 30 national and international experts set to speak at the event – as well as Ireland, these hail from France, Germany, the Netherlands, Austria, and even as far away as the US and China. This mix is critical to maximise the delegate experience and encourage learnings at the event, notes Neville.

“Healthcare seems to be the one sector where best practice is not routinely shared internationally. The Future Health Summit is attended by key decision-makers in health; people now realise it is a significant international event and they are coming from around the world to attend it.” He adds there will also be more than 75 exhibitors.

Undoubtedly, the Future Health Summit offers a major networking opportunity, and many collaborative initiatives and projects have seen their genesis at the event.

“The feedback we are even getting from UK thought leaders is that they are finding it easier to meet people and speak to them at the Future Health Summit than it would be at home in the UK,” says Neville.

And while it is a global event, it nonetheless provides an opportunity to put Irish best practice on the map – something that doesn’t routinely happen for a sector plagued by negative headlines.

“Healthcare is criticised constantly here but when we look at measures such as our infant mortality rate and life expectancy, we have seen major successes here,” Neville says. “We are on a par with some of the longest-living nations in the world.” He adds that international delegates are often impressed with Irish healthcare standards.

“For example, Ireland has always aspired to the Dutch healthcare system but there were representatives here some years ago and they were wowed by the standards of our community care.”

The director general of the HSE, Paul Reid, will be the keynote speaker at the event and his appearance is eagerly anticipated, says Neville. “He had just been appointed when we took place last year, so he will be a year in the role by the time of the summit – it is good timing to hear his thoughts.”

The organisers also recently confirmed that Eric D Hargan, deputy secretary at the US government’s Department of Health and Human Services, will visit Ireland to speak at the event. While this is undoubtedly a coup for the meeting, Neville explains it was Hargan himself who first expressed interest in attending.

“It’s just another example of the international profile of the Future Health Summit – he heard about the event while he was at a meeting in The Hague, and said he would like to attend.”

Other speakers in the diverse line-up include: Dr Nadine Hachach-Haram, plastic surgeon and NHS clinical entrepreneur; George Mao, chairman of Shanghai Pinzhi Investment Management; Emmanuel Masson, chief executive for Hospital Division (CLINEA) and group operating officer in charge of clinics at the ORPEA Group in France; and Shahana Ramsden, head of diversity and inclusions at NHS England. Irish-based speakers include Dr Sabina Brennan, psychologist and neuroscientist at Trinity College Dublin, and Greg Martin, a specialist in public health medicine at the HSE who is originally from South Africa.

The busy event also sees the presentation of the annual Future Health Summit Innovator Award. Now in its seventh year, the award is presented to an emerging business that successfully integrates technology into its mission to improve healthcare quality, explains Neville. The aim is to showcase innovation and profile new start-up companies and entrepreneurs operating in the healthcare sector.

Applications are now open for the award; while roughly 60 applications are received every year, Neville says these will be whittled down to just eight innovative companies who each make a short pitch at the summit – the exposure provided by the summit will be a boon for all shortlisted projects.

“Companies participating in the award can engage with fellow trailblazers in the health technology field, as well as the numerous delegates and speakers attending the Summit,” says Neville.

The Future Health Summit takes place May 20th-21st at the RDS in Dublin, with an audience of 600+ high-end (C-Suite) industry delegates attending. For more, see futurehealthsummit.com