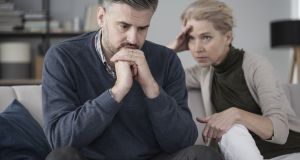 ‘The difference with Complex PTSD sufferers is the fact that they are associated with functional impairment in their case.’ File photograph: Getty

Post traumatic stress disorder (PTSD) sufferers around the world are benefiting from better treatment options thanks to the work of Ulster University Professor of Psychology Mark Shevlin and a group of other leading academics who produced the research evidence to have Complex PTSD defined as a separate condition.

Up until quite recently, people with Complex PTSD were diagnosed with PTSD and treated with cognitive behavioural therapies (CBT) that were often ineffective. “CBT works very well for people with PTSD but the evidence was starting to come through that when people didn’t respond well to it was because their diagnosis didn’t capture the full range of problems they were suffering from,” Prof Shevlin explains.

The work dates back to 2013 when Shevlin was invited by the World Health Organisation to join a working group which would collect evidence to support the inclusion of Complex PTSD in the International Classification of Diseases (ICD). “This is a kind of manual that every clinician across the globe uses,” Shevlin points out.

“Every physical disease and psychiatric disorder has an ICD code and a definition along with a, list of symptoms. It allows doctors around the world to communicate in a common language and means they are diagnosing conditions using the exact same set of symptoms.”

Up until the publication of the 11th version of the ICD in 2018, there was no classification for Complex PTSD. The general form of PTSD was described as having a number of symptom clusters including the re-experiencing of the traumatic event, avoidance behaviours, and hyperarousal where sufferers are on constant alert for threats and danger.

“What was evident for many years was that PTSD was the most co-morbid of psychological disorders,” says Shevlin. “Sufferers are very likely to be experiencing other psychological problems such as anxiety, depression, self-medication with alcohol or other substances to alleviate the effects, and outburst of intense anger and even violence.”

These problems are associated with people who have suffered particular types of trauma such as child sex abuse which can bring on intense feelings of guilt and shame.

He describes PTSD on its own as a “psychiatric unicorn”, vanishingly rare. While it does exist, most sufferers are likely to experience some co-morbidities as well.

Complex PTSD has its own symptom clusters which are additional to those for PTSD. These include severe and persistent problems with affective regulation where people have difficulties in regulating their emotions and can either be hypoactive – flat and emotionless – or hyperactive with very high moods.

The second cluster is negative self-concept where the sufferer has strong feelings of shame, guilt and worthlessness. The third covers difficulties with relationships that leave people feeling isolated.

Of course, the great majority of people will experience some or all of these experiences from time to time. The difference with Complex PTSD sufferers is the fact that they are associated with functional impairment in their case. While they can be distressing, the symptoms should also have an impact on our day to day lives to be associated with a diagnosis of Complex PTSD.

“Anxiety becomes a clinical condition if it impacts on your day-to-day life and your interactions with family and work and so on,” Shevlin notes. “Functional impairment is a very important criterion.”

The inclusion of Complex PTSD with its separate definition and diagnostic description is already benefiting patients. “Up until then it was difficult for clinicians to help patients who were presenting with PTSD symptoms as well as other problems,” he says. There wasn’t a diagnosis for that. This means they can treat patients better. A lot of the work going on now involves trying to develop treatments for Complex PTSD and to understand their efficacy. I have been involved in some of that work. Now that we have a proper diagnosis, we can look for better treatments.”

The World Health Organisation working group is also looked at the International Trauma Questionnaire, a self-reporting tool for PTSD sufferers. This has led to improvements in the questionnaire. Meanwhile, a team in Cardiff University has used that work to develop a trauma interview. “This is a structured interview which enables an assessment of the disorder in a clinical setting,” Shevlin explains. “Self-reporting is good for screening populations, but the interview is much better for assessing severity.”

This will also help with treatment in the longer term. “Previously, if you were experiencing Complex PTSD or PTSD you could get exactly the same diagnosis and the same treatment for very different psychological problems. This will allow more fine-grained judgements in relation to diagnosis and forms of treatment.”