Greater interconnectivity can ensure fewer outages, give flexibility to move power around and cut costs for consumers 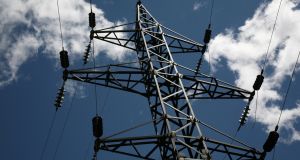 The interconnector proposal is for the construction of a 138km overhead line, with 104km of it south of the Border. Yet there have been calls for it to be run underground instead

The proposed new North-South interconnector to provide an additional link between the electricity systems in the two parts of the island received a significant boost with the restoration of the Northern Ireland Executive.

“The project has been effectively in abeyance for the past three years,” says Eirgrid director of grid development Michael Mahon. “It required ministerial sign-off in Northern Ireland before it could go ahead, and we couldn’t get that up until now. We are looking forward to getting the project back on the road.”

Three cross-Border interconnectors already exist, two quite small and a larger 275kV connection between Co Louth and Tandragee, Co Armagh,which is the primary means for power to flow between the Republic and Northern Ireland at present. The new 400kV interconnector between Co Tyrone and Co Meath will be significantly larger again.

The capacity increase is actually much greater than suggested by those numbers. The amount of power flowing on the Louth-Tandragee line is normally restricted to around 300MW. The new line will be able to carry 1,500MW at any one time.

This increased capacity is required for a number of reasons, according to Mahon. “It is necessary. The primary reason is that both systems need added interconnectivity to provide more security of supply. More interconnectivity on the circuit can ensure less outages, give flexibility to move power around to where it is needed, and ultimately reduce costs for consumers.”

In essence, the connection will allow the two systems almost to act as one, with excess power in one part of the island being directed to areas where there is a shortage.

This greater flexibility will reduce the overall need for excess generating capacity to meet peak demand and facilitate greater competition among generators North and South and that should ultimately feed into lower prices for consumers.

It will also facilitate the ongoing increase in renewable power on the system.

“In Ireland, the Climate Action Plan commits us to having 70 per cent of all generation coming from renewable sources by 2030,” says Mahon. “That’s more than doubling the amount of renewables on the system. The UK has committed to being carbon neutral by 2050, and it is reasonable to assume that this will mean having 70 per cent or more renewables by 2030.”

While Ireland is in a very strong position to develop wind energy resources, its variability presents a challenge. It can be there one day and not there the next. Alternative sources of power are required if the wind is not there. The interconnector will allow for the two systems to import electricity from the other when we they don’t have enough renewable generation to meet demand.

The interconnector will also provide comfort to renewables project developers that there will be a market for their output when it comes on stream.

There has been much debate about the physical nature of the line. The proposal is for the construction of a 138km overhead line, with 104km of it south of the Border. There have been calls for it to be run underground instead.

Mahon says there are both technical and cost implications to the underground option.

“Because of the size and length of the project the ideal solution is an overhead line. All electrical power generated here is alternating current (AC). That would have to be converted to high voltage direct current (HVDC) if we were to put it underground, and that would be very costly.

“It would also be much more expensive to construct as it would involve digging for around 150km, and that would mean much more disruption from an environmental point of view.”

Yet cost is only a secondary consideration in some respects. “From my own perspective, a bigger challenge is that HDVC is not as reliable as AC, and is much more complex to construct.”

He uses the analogy of Ireland’s electricity as a human body. “If you can imagine Ireland as a human body with the backbone, the central nervous system, running down the middle. That’s the most critical part of the body. We can’t afford it to be unreliable. It represents a structural risk and impacts on security of supply and increases the risk of turning significant numbers of people off.”

There is also a maintenance issue. “With an underground cable repair times are likely to be longer. An overhead line is more accessible.”

There is also an economic point referred to in the report of the International Expert Commission appointed by the government to examine the proposal. It noted the fact that an underground line would not be accessible to new industries establishing in the Border region in the same way as an overhead connection would be.

“We’ve been working on the project for a number of years now,” says Mahon. “It has taken a long time to get to this point. If we get permission in the next few months will be able to go to tender then. Our expectation is that it will take three years to build, and we are looking at having it connected and available by 2025.”