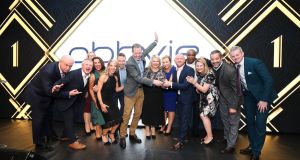 AbbVie, the global biopharmaceutical company, has been named as Ireland’s number one large workplace for the second time in the last three years. The award was presented at the 18th annual Great Place to Work Ireland’s Best Workplaces ceremony in Dublin last month.

The company has been listed among the best large workplaces in Ireland in each of the past seven years and ranked in the top three companies for the past five. It previously took the top accolade in 2018 and remains the highest-placed company in the biopharmaceutical industry across all categories.

According to AbbVie’s HR director for Ireland Samantha Commons, the company’s ranking reflects a continued focus on talent development, equality, diversity and inclusion, health and wellbeing initiatives. “It also reflects efforts to provide employees with meaningful opportunities to engage with their local communities through science, education and volunteering projects.”

“Being ranked as one of Ireland’s best workplaces seven years in a row is a significant achievement for the company and reflects a long-running commitment to create and maintain a high-performing company culture,” she adds. “It demonstrates the ambition, drive and passion of our employees across Ireland to make an impact on patients’ lives around the world.”

“AbbVie strives to create an inclusive culture where all employees are treated equally, with dignity and respect,” she continues. “Our Women Leaders in Action (WLA) group provides practical learning and growth opportunities for members at our five sites across Ireland – helping them take charge of their career journeys and achieve their full potential.

“AbbVie is also keen to create the best working environment for our people,” says Commons. “One of our more recent initiatives is the creation of a new and expectant mothers’ forum. It provides opportunities for female employees to share common experiences, seek advice and help shape and improve associated policies. Such is the success of the initiative, it is now being expanded to include all parents in the spirit of inclusivity.”

Great Place to Work Ireland is part of a global network of culture consultants, with offices in 48 countries, using an established methodology to publish rankings at country, regional and global levels.

The institute assesses the policies and practices in place in organisations under nine key areas: inspiring, speaking, listening, caring, developing, thanking, hiring, celebrating, and sharing. These practices are benchmarked against other organisations in that country.

The second key component of the assessment is an anonymous trust index survey that gathers the perceptions of employees under five dimensions: credibility, respect, fairness, pride and camaraderie. Finally, there is an in-depth qualitative analysis of open-ended comments from employees. Company rankings are based primarily on the confidential input from employees.

“Reaching the criteria to appear on the list of best workplaces in Ireland is a massive achievement and has provided a great platform for organisations to differentiate themselves both externally and internally as employers of choice,” says Cathal Divilly, partner at Great Place to Work Ireland. “While attractive benefit packages will go some way towards employee satisfaction, the companies on this year’s list have realised that their unique and distinctive cultures are what will mark them out in a crowded market.”

It is especially rewarding to see the efforts of staff members validated by external recognition, according to Commons. “The number one ranking and Best Workplace for Women award are clear endorsements of the fantastic work our people are doing in bringing AbbVie’s unique company culture to life.”