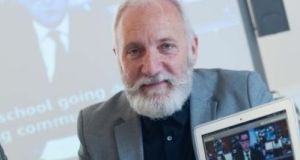 Professor Paul Moore: “It’s about turning the dataset into narratives to drive cultural and economic change. Ironically, when you do it you do increase audiences and that puts the organisation on a more commercial footing.”

Arts organisations are under increasing pressure to prove they deliver value for money to the public purse.

More often than not this leads to a literal culture clash between the number crunchers on one side and the arts practitioners on the other who make the very reasonable case that art is incapable of measurement by standard accounting means.

Instead of letting the data speak for itself, they need to interrogate and interpret it. But there are ways to measure what has been thought unmeasurable, according to Professor Paul Moore of the Ulster University School of Arts and Humanities.

In a presentation to the UK National Endowment for Science, Technology and the Arts (Nesta) in 2013, he and his colleague Professor Anthony Lilley argued that the use of data can enhance the understanding of the role of arts in the UK economy and aid the organisation of arts bodies by offering insight into audience behaviours, which can support decision-making around aspects such as programming and marketing.

“We found that we had caught a moment,” says Prof Moore. “It generated a lot of interest and we ended up presenting to an EU culture ministers meeting in Lithuania. We were encouraged to apply for a much larger Nesta grant and that led us to collaborate on a project with organisations like English National Opera, English National Theatre and The Barbican to look at it.”

Interestingly, the research revealed that arts organisations were not suffering from a data deficit.

Ethnography is the study of the behaviour of participants in a specific social situation and understanding and interpreting that behaviour. From an arts point of view, it goes beyond merely counting the bums on seats to analysing other aspects such as the reasons why people attend particular shows and how they react to them.

That combination has become known as ‘thick data’.

It goes beyond big data to explain why consumers have certain preferences, the reasons they behave the way they do, why certain trends stick and so on.

“It has proved incredibly successful,” Moore says. “We didn’t know it would work but it did. We went into organisations and spent time with them on ethnography. We looked at how they were using their data and helped them maximise it.”

Organisations need to get as much data as they can about what they are looking for, he continues.

“Instead of letting the data speak for itself, they need to interrogate and interpret it. They need to get the data to tell a story. That means interpreting it to tell the best story about the organisation.”

This doesn’t mean putting a spin on the facts or creating a false narrative, merely showing the organisation in its best light using the available data.

“We found numerous examples of how data is not being used effectively,” he notes. “In many cases there is a gap between the data people and the creative people. The creative people working entirely separately whereas it might be interesting for them to have audience data when making decisions. I call it the reverential gap. Creatives are always given priority.”

That’s a gap that needs to be bridged.

“We developed the concept of a data scientist in residence and we recruited two women who worked in the role for two organisations,” says Moore.

“They showed how thick data could be used to change the culture of the organisation and to produce narratives. This notion of telling their story is quite a profound thing and feeds back into demonstrating value for money. We are helping valuable organisations produce evidence as to what they are doing.”

That work has in turn resulted in the establishment of a creative industries cluster in Northern Ireland.

“Things have changed over the last two years and there is a more general understanding that data is important in proving the value of the arts,” he notes.

“A number of organisations have got funding to set up creative industries clusters across the UK and their applications to the UK Arts & Humanities Research Council had to be grounded in a thick data narrative. We succeeded in securing £13 million over four years for the establishment of Future Screens NI in Belfast. That was a direct consequence of being able to construct a narrative around the data.”

But it’s not just about data and finance.

“It’s about turning the dataset into narratives to drive cultural and economic change,” says Moore. “Ironically, when you do it you do increase audiences and that puts the organisation on a more commercial footing. Future Screens NI ran a funding call with the Arts Council for fine artists to use technology in their work. That wouldn’t have happened without this.”