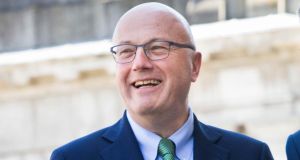 In a sign of Ireland’s increased standing in European research and innovation, Science Foundation Ireland (SFI) director general Prof Mark Ferguson has been appointed chair of the new European Innovation Council advisory board. He has been joined on the board by Irish-based researchers Dermot Diamond, principal investigator with the Insight Centre for Data Analytics at Dublin City University, and Valeria Nicolosi, chair of Nanomaterials and Advanced Microscopy at TCD.

The European Innovation Council (EIC) was set up by the European Commission to turn science into new businesses and accelerate the scale-up of innovative companies. Currently in its pilot phase, the EIC will be set up on a permanent basis with a €10 billion budget from 2021 under the next EU research and innovation programme, Horizon Europe.

“The EIC is a key pillar of Horizon Europe, the successor programme to Horizon 2020,” says Prof Ferguson. “In round numbers, the pilot phase will have a budget of €2 billion.”

The aim is to help Europe catch up on the US and Asia when it comes to innovation. “While Europe has made great progress in basic science, it is lagging behind in translating that into start-ups and scale-ups and commercial opportunities,” he explains. “Artificial intelligence [AI] is an example. Europe is way ahead in the basic science there but is far behind the US and China when it comes to developing commercial applications for the technology.”

The EIC’s approach to be funding will be critically important. “We hope it will be innovative and entrepreneurial and take higher risks than national funders,” says Ferguson. “You might have a company with an interesting technology but needs more funding to develop it. By providing funding and equity investment in companies like that, it will lower the risk for other funders who will hopefully follow in. This will help them scale and grow rapidly.”

While the EIC will be staffed by experts in various fields, the role of the board will be to advise and guide policy. “The board is there to help the management to be bold and ambitious and not focus too much on rules and bureaucracy,” Ferguson notes. “We hope to help guide the EIC to deliver innovation excellence in Europe in the same was as the European Research Council has delivered research excellence.”

The thinking behind the establishment of the EIC was inspired by the US Defence Advanced Research Projects Agency (Darpa) which dates back to the launch of Sputnik by the Soviet Union in 1957. Darpa was created to ensure that the US would never again fall behind its rivals when it came to technological advances and it has not only been responsible for military inventions but also the development of the internet, automated voice-recognition and language translation, and the GPS receivers we take for granted in our mobile phones and other devices.

“Europe will be making its own ‘arpa’ without the defence application,” says Ferguson. “The way national agencies approve research funding is to subject proposals to high-level international peer review to ensure it is best in class. That is a really good way of awarding funding, but you end up with the consensus view, what a group of leading experts all agree is the best way forward. Darpa does this but also funds alternatives. The consensus is not always correct. What happens if we discovered at some stage in the future that zinc was a better basis for battery technology than lithium ion? The Darpa approach helps to uncover technologies that traditional approaches may miss.”

This isn’t the only change to the EU’s approach to research funding. The other is the creation of missions within the Horizon Europe programme which will take on the great societal challenges like climate change; cancer; healthy oceans, seas, coastal and inland waters; climate-neutral and smart cities; and soil health and food.

“SFI has already started challenge-based funding,” Ferguson points out. “We launched the Future Innovator Prize last year and we have just launched two more challenges – AI for societal good and zero emissions which will address the target of achieving net-zero economy-wide greenhouse gas emissions by 2050. These funding competitions are synergistic with the European missions, and the Irish research teams will be able to use the funding to collaborate with other partners around Europe.”

Ireland is performing well in Europe when it comes to innovation, but Ferguson wants to see an improvement. “Our aim is to move from being a strong innovator to becoming an innovation leader. We are already the most R&D efficient country in Europe; for every euro spent on R&D in Ireland, we produce more innovation outputs than any other country in Europe. We are twice as efficient as Germany, for example. But what we are doing can always be improved. The thing that’s holding us back is the need for more investment and the Government is committed to that and increasing it significantly by 2040. We don’t want to be following others, we want to lead. And we have already shown we can do that.”