Coast to coast: stories from the Dublin Galway train line 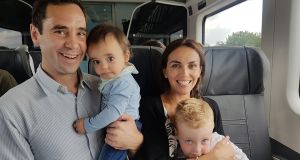 Jane, Graham, Seán and Jack Villiers-Tuthill. "The fact that we can sit here and we have a table and we can keep walking up and down and find distractions is great," says Jane

Jane, Graham, Seán and Jack Villiers-Tuthill are all from Ireland and live in Kenya

The Villiers-Tuthills (pictured above) are from Dublin but now live in Kenya. They took the Galway train as they are visiting grandparents in Clifden.

“We stopped off in Spain on the way as my sister was getting married, and we flew back yesterday from Bilbao - we’re wrecked. My husband works in marketing and we moved to Kenya six months ago. Life in Kenya is really good, it’s just a very nice outdoors life, the climate is really nice, Seán is in a great school, there’s not much time difference, and it’s easy enough to get back. We lived in Singapore and Indonesia before.

“We decided not to rent a car and get the train instead. Renting cars just always turn into so much hassle. Then we just thought of taking the train because with kids, there are bathrooms, changing facilities, you can get water, you can get tea, you can get coffee. It’s just easier than trying to keep kids comfortable on a bus for a few hours. It’s just more comfortable. The fact that we can sit here and we have a table and we can keep walking up and down and find distractions is great.

“We will spend six days in Galway and we will take the train back to Dublin. This is our first time to do this, to take the train, but having done it today as a family, we found it super easy. I was pleasantly surprised at how nice it was, how easy it was, and everything was on time,” says Jane.

The Reynolds left Cork that morning on the train to Dublin and were getting the Galway train to Athlone to visit their daughter who lives there. Gerard works for a construction and building materials supplier and was working until 2am before their journey.

“We get the train instead of driving because we wouldn’t be great with Sat Navs, and we’re not sure of the road. Since we started using the train, we’re addicted now at this stage. It’s so much easier for us. I’m a diabetic, I can have my lunch on the train easily.

“Our daughter and her partner live in Athlone. I like the comfort of the train. To be able to get up and walk around. You can have a rest. Gerard was working until 2am,” says Geraldine.

“You can close your eyes. It’s handier than driving, you can relax,” says Gerard.

“We visit our daughter regularly. We will stay for a couple of days. What I like about the train is that it’s very straightforward. Everything is there in front of you on the platform. For us, it’s very easy to follow. It’s so easy.” says Geraldine.

Sean and Louise Furey too the train to attend an appointment in Crumlin Hospital.

“We were in Dublin today to go to Crumlin Hospital, so we got the train from Athlone and a taxi straight out to the hospital. I do drive but I parked my car at the station in Athlone and left it there because I don’t like driving in Dublin or looking for parking. The appointment went well and we will be back again in a few weeks,” says Louise.

“The train is great. It’s comfortable and you can charge your phone. People can use their laptops and the whole lot. They go round with the tea and coffee, so it’s grand, it’s quite relaxing. The kids use the wifi for their phones,  which is another advantage. If I had driven up I’d have been exhausted and more stressed than anything. One of the benefits of the train is that you can just sit back and relax,” says Louise.

Rufer and Brosig arrived into Dublin the day before their trip to Galway. They are art and psychology students. It was their first trip to Ireland and they were staying for a week.

“We wanted to go to Ireland and we were searching a few different spots to visit and we heard of Galway as an interesting city for students,” says Rufer.

“Also, Coco’s friend from school, she told her about Galway and that it’s a great city. We are here for one week in Ireland now and we want to see some places. At first our plan was to drive by car because then we would be able to get to all the nature places but we looked at all the different car companies and almost everyone required an age of 25 and I’m just 23 years old. Then we decided to take the train and also it’s better for the environment. I think the train is more convenient, it’s more comfortable,” says Brosig.

“I have space on the table to do collage or maybe drawing something. We are finding Ireland very good. The people are very nice. We are planning on going to a craft market in Galway,” says Rufer.

“We will stay in Galway for one night and then we are going to Killarney for two days and then we will go back to Dublin. The train is really nice, there are very big tables and the chargers are convenient. It looks really nice, the seats are nice. I think the trains here are better than in Germany,” says Brosig.

Father and son were visiting Ireland for 10 days. They started in Dublin and were on their way to visit Galway on the train and are going to stay for five or six days. Andreas is a music journalist.

“We take one trip together each summer. We spoke about destinations this year and we’d heard interesting things about Ireland. I hadn’t been to Ireland before so it sounded like a promising destination for both of us so we decided to come here. This is the fifth trip we have had together. We are enjoying it, it’s a good time to spend together. I’m interested in the Galway International Arts Festival which is happening there at the moment.

“We are very happy we took the train today. I personally prefer to take the train because it’s very comfortable, it’s a very pleasant way to perceive the landscape. You see all kinds of landscapes that you don’t see from the streets,” saya Andreas.

Sean had arrived  from Canada in the morning and was taking the train to Galway to meet his dad and his brother who were already there. Sean and his brother had visited Galway last year and fell in love with it. So much so they convinced their dad to join them on a trip back to visit this year.

“Last year my brother and I went to Galway for the first time, it’s a good town, I love it. We are going to spend a few days there and then go down to Kerry and then Kilkenny and then back to Dublin. Last year we went to Galway, then the Connemara region, back then to Killarney, a bit of Cork, Kilkenny and then back to Dublin. I’m late but my brother and my dad, who came earlier, just did about seven days in Belfast, Derry and Donegal. I could only get a week off work, I’m a personal trainer and construction worker. We have Irish roots so I definitely feel a connection to Ireland. As soon as we finished last year we were just like ‘we have to come back.’

“I like the atmosphere in Galway. You don’t get a lot of walking streets in Canada, the odd one here and there, but not like that. I like the older cities, I like the architecture of Europe and Ireland, and it’s got good pubs and restaurants, too.

“We travelled by train when we came before, it’s a great train ride. It’s super fast, it’s direct, it’s comfortable, it’s reasonably priced. It’s beautiful scenery. There is some sort of classic feel that you have, riding the train,” says Mellor.

John is CEO of a tech company. He is based in Galway and takes the train to Dublin regularly for meetings

“I got an early train this morning from Galway, around 6am. I took the train because I can do a bit of work while I am on it. I can check email, I can do about two hours work. When I arrive in Dublin, I can just get in a taxi, go to my meeting, come back and go home, I don’t have to worry about a car. With the train, I know I’ll get there on time. Especially in Dublin, there’s nothing worse than being late.

“I travel to Dublin around once a week. Most of the time I would take the train, unless I was meeting somebody afterwards, socially, if I was staying over. From my point of view, the train means I can sit back and do some work. If you’re driving you’re taking at least five hours out of your working day. It’s convenient for work for me, it will get me there on time and I don’t really like driving, it’s a waste of time. It’s a lovely train,” says Clancy.

Federica is a university student and went to Galway for an overnight trip. She has been in Ireland since June and is staying for one month. She is volunteering in a country house while she stays here and is keen to see as much of Ireland as she can on her days off.

“For our days off myself and some other volunteers from the country house take trips and we decided to go to Galway. I’ve visited Cork, too. I loved Galway, it’s very different, very vibrant, full of music, a very young city. I visited the Cathedral, it was wonderful. I loved walking on the streets, the quays, I loved seeing the city centre.

“I like this kind this of service because in Italy there isn’t, not in the regional areas. I’m studying cultural heritage and I like the Irish tales and legends. I have a few weeks left in Ireland, I think I might visit Limerick or Killarney. I decided to take the train ... it’s more comfortable,” says Cappello.