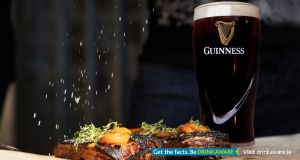 Tickets include five signature dishes each paired with a beer, a pint of your choice, live music and expert speaker programme

Carved or minced, diced or pulled, delicately shredded or a great big juicy slab; you’ll find your meat soulmate at Guinness X Meatopia 2019. The smoking hot celebration of beer, food, fire and music is back for a third instalment from July 5th to 7th, and this year there’s a twist, as brewers and live-fire chefs from around the world challenge each other to pair unique drinks and dishes.
These delicious combinations will be available exclusively for one weekend at Guinness Open Gate Brewery, the home of beer innovation and experimentation at Dublin’s St James’s Gate. As always, alongside the best of Irish meat and top-quality brews, there’ll be talks, demos and live music to get festival-goers fully fired up.

The hugely popular event attracts a who’s who of adventurous, international and Irish live-fire chefs, and this year is no different.
Their emphasis will be on local, seasonal ingredients and the finest, ethically-sourced meat, grilled or smoked over sustainable wood and charcoal.
Meatopia isn’t just about prime cuts; this is “nose-to-tail” eating that encompasses the whole animal.

Among the chefs bringing their meaty Midas touch will be:

Malcolm Lee is head chef of Candlenut restaurant in Singapore. This Michelin-starred eatery specialises in Peranakan-heritage cuisine (inspired by Lee’s grandmother’s cooking) with a modern twist. With traditional Peranakan dishes taking up to a week to prepare, Lee’s cooking is a true labour of love.
David Thomas is the Baltimore born-and-bred chef behind local soul food institution Ida B’s Table. Also inspired by his grandmother’s culinary expertise, he serves up hearty “Modern Soul” (think Jerk Duck Legs, Sega Wot and Jumbalaya).
James Cochran is head chef at 12:51 in North London. Cochran delivers an unusual but delicious Kentish-Scots-Caribbean fusion, with his signature goat a particular hit.
Will Bowlby, of London’s Kricket restaurant, blends seasonal British ingredients with punchy Indian flavours. It’s a combination that’s paid off; in 2018, Kricket’s Soho branch picked up a prestigious Bib Gourmand from the Michelin Guide.
Dublin-born Anna Haugh is head chef of the just-opened Myrtle Restaurant in London, her first solo venture after working for almost 20 years for chefs including Gordon Ramsay and Derry Clarke.
Gráinne O’Keefe, a fellow Dubliner, is head chef at Clanbrassil House restaurant in Dublin 8. Clanbrassil House specialises in cooking over fire (from Black Angus côte de boeuf to rib-eye, bone marrow, parmesan and anchovy).

This year’s Guinness X Meatopia should treat revellers’ palettes to some tantalising flavour combinations, as tickets include five unique dishes paired with five perfectly matched taster beers, plus a pint of choice from the beers exclusively available for the festival weekend. There couldn’t be a better location for the three-day event.

Since opening its doors in 2015, the Guinness Open Gate Brewery has developed from an experimental brewery and taproom into a creative brewing space where beer fans can join top-of-their-game brewers as they concoct innovative new beer flavours and styles.
Last year, the drinks specially created for the festival included a salt and pepper beer and a caramel ale. Who knows what they’ll conjure up this time? Naturally, given that they are at the home of Guinness, Guinness Draught will also be served, a great accompaniment to any barbeque.

Meatopia’s ethos isn’t about gluttony. On the Meatopia Cutting Room Stage, you’ll find some of the most passionate protagonists of food, beer and fire discussing what they’ve learnt along the way, sharing knowledge about cutting, cooking, burning, brewing and distilling.
There will also be beer tastings, butchery and food “edible demos”.
Highlights include chef Anna Haugh talking about modern Irish culinary trends, and soul food aficionado David Thomas discussing the evolution of his beloved cuisine.
Also taking to the stage will be The Beer Kitchen author and self-described “international beer judge of mystery”, Melissa Cole. The award-winning writer will share her views on the growing trend for low-alcohol beers, and reveals how they can still be bursting with flavour.

The weekend’s festivities will be accompanied by a cracking soundtrack, with an eclectic programme of live music and entertainment on the menu throughout the weekend and as the day turns into night.

Guinness X Meatopia will take place at the Guinness Open Gate Brewery in Dublin on Fri July 5th (6pm to 10pm), Sat July 6th (2pm to 10pm) and Sun July 7th (1pm to 7pm). Tickets start at €59.50 and are on sale now. Tickets include five signature dishes each paired with a beer, a pint of your choice, live music and an expert speaker programme.
#GuinnessXMeatopia #GuinnessOpenGateBrewery
Visit guinnessopengate.com/events