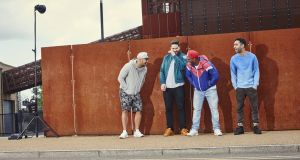 There’s a rich seam of cultural DNA at the heart of the latest chapter in the Guinness Made Of More campaign, fusing the energy of 1930s New York jazz with the bricks and mortar of London’s Dubstep garage scene. It might seem an uneasy connection, but listen to the story of Amir Amor, producer and songwriter with Hackney band Rudimental and it’s easy to see how the vision of one man in 1930s Manhattan can bridge the decades and get inside the mind of this 21st-century musician.

Back then, producer John Hammond, the man at the heart of the new ad from Guinness, stood alone in New York against the practice of segregating black and white musicians and audiences. He couldn’t see a logic in keeping them apart in life and so, despite pressure from all sides, ignored convention and created a fusion of jazz, gospel and big-band sound that still define music today.

It was a brave move for a new young promoter, who could often be found bar-hopping the jazz clubs and bars of Harlem in search of new talent. It didn’t go unnoticed by the establishment and he had many critics, but his radio show became a powerful platform that was undeniably popular.

In his career, Hammond discovered and brought the likes of Billie Holiday, Count Basie and Benny Goodman to world attention - names that went on to help write the history of 20th century music. But it was his bringing together of black and white musicians that left his most lasting mark and it’s this legacy that caught the ear of Amir Amor of Rudimental.

In the first of a series of short films on Hammond’s legacy, Amir recounts how as a child asylum seeker in London his understanding of music was formed while he was literally trying to find his own place in the world. The sense of being a foreigner without a passport was very much alive in him, he says, and challenged him to be confident and experiment without boundaries. He was always surrounded by people from all parts of the world, and even in school he could see a kind of separation among people that he pushed back against.

Like Hammond in Manhattan, Amir looks to the Hackney landscape with pride and ownership and brings the diversity of the people, sounds and life of his surroundings to his music. One part of a four-piece band, he looks to new unknown voices to capture the sense of the melting pot of London and carve out a new sound.

With Rudimental, he’s introduced the world to new musicians such as John Newman and Ella Eyre, building their voice and vision into a distinctly fresh sound while always staying true to Rudimental’s core identity.

Like the award-winning Sapeurs and recent Rugby-themed ads from Guinness, the Rudimental film is visually arresting, telling a story that is stuffed with atmosphere and conveying a strong sense of place. Shot in the streets of Hackney and involving his band members, it’s rooted in Amir’s life experience and the competing genres and influences that shape Rudimental’s sound. Pirate radio, dubstep, jungle and dance all compete for dominance with lyrics that Amir hopes will affect people. The message is more than just to dance, he says, echoing John Hammond’s world view.

The film is a great partner to the core Guinness John Hammond ad. Shot in black and white, it journeys back to 1930s New York with an opening line that heralds “When Jazz hit New York, New York hit back”.

It’s a powerful take on a career that mattered, and in 60 seconds brings us through a story that sparks with drama, history and excitement. The dancers, the fashion, the atmosphere and the great jazz track underpinning it all is a terrific way to champion a man who described himself as the “intolerant champion of intolerance”.

Add Amir’s voice and Rudimental’s music to that mix and we’re reminded that one person’s impact can echo through the years and that pushing boundaries is as relevant today as it was in the 1930s.