The second in the series of Guinness short films with UK rapper Lady Leshurr, discusses how music and lyrics continue to be a force for change

Lady Leshurr on the legacy of John Hammond - Guinness Ireland 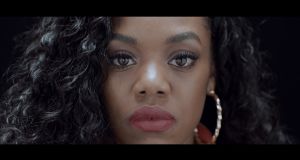 At her recent New York debut, Birmingham rapper Lady Leshurr says she started laughing in the middle of her performance, so surprised was she to see a packed crowd at Manhattan’s Gramercy Theatre sing her lyrics right back at her, surprised that so many people in the Big Apple even knew who she was, surprised to hear her words with the bounce of American accents.

She’s come a long way, but it seems like the new Queen of UK Rap has arrived right on time and a New York stage, the perfect platform. It was no overnight success, but her viral hit Queen’s Speech Ep. 4 helped get her there, with lines like “How can you speak my name when you haven’t even brushed your teeth” writing good humour into spaces others in her field fill with profanity. It’s a formula that marks her out in the Garage/Grime scene but one she celebrates in the latest short documentary that follows the release of the new Guinness ad – ‘John Hammond - Intolerant Champion’.

It’s a beautiful piece of work, infused with atmosphere and personality and a great companion to the 1930s-themed Guinness ad. Like with the Rudimental film on the legacy of John Hammond, it’s reassuring to see musicians make such easy links between these most modern of musical genres and a 1930s Jazz promoter who “heard no colour line in the music”. Forging these strong links between people is the source of power within Lady Leshurr’s lyrics, it seems.

Born Melesha O’Garro, she’s been writing poetry since the age of 12, building experiences and life lessons into her identity as a rapper as she grew. She pulls her influences from the UK scene but also fuses her parent’s Caribbean heritage into her sound.

It appears to be a simple approach to a very complicated outcome: a growing fanbase on both sides of the Atlantic that fuels a YouTube strike rate of over 20 million views on one video alone.

She still keeps it simple though, wanting people to enjoy her music, have fun, and in doing so become better versions of themselves. “John Hammond saw music as a force for good,” she says in the opening lines and this is her message too. Diving deep in to her own experience as a young person in a famously tough business, she allows herself to dream big and encourages others to do so too. Similarly, “Intolerant Champion” captures a sense of fairness that resonates with Lady Leshurr. “He didn’t really care about what race or culture the music was. He was just passionate about it. That’s the same for me. If your music is amazing I’m going to listen to it.”

That same message is embedded in the Guinness ad – a story that sparks with drama, history and excitement. The dancers, the fashion, the atmosphere and the great Jazz track underpinning it all is a terrific way to champion a man who described himself as the “intolerant champion of intolerance”. His radio show, the acts he produced, the changes he brought to the world of music through his outright refusal to segregate black and white musicians continue to resonate today. Lady Leshurr’s voice on a New York stage becomes another layer on that experience and a great reason to be positive.