Fans recently gathered in Dublin for a Green & Black’s event to celebrate author Marian Keyes, and the release of her novel, Grown Ups 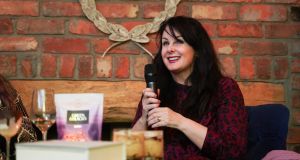 The night also saw an exclusive announcement – Keyes confirmed she is a whopping 8,000 words into a sequel to her much-loved book Rachel’s Holiday, to be called Again, Rachel. Photographs: Conor Mulhern

A bitterly cold November night did not dissuade fans from braving the elements to attend a Green & Black’s literary event involving a special live recording of The Irish Times Women’s Podcast with author – and national treasure – Marian Keyes.

Her Twitter followers (all 189,000 of them) know all about her wit and wisdom, and the intimate surroundings of House Dublin were the perfect setting for what felt like a cosy chat with the author. No topic was off limits – from facial fillers to Fine Gael - and her unique combination of giggles and gravitas made for a deeply satisfying evening for a lively audience who were also treated to bespoke chocolate-infused cocktails.

Keyes eloquently described her heartache at what she saw as the tragedies of homelessness and direct provision, and railed against the Government for what she sees as their “inaction and ineptitude”.

A card-carrying “bleeding heart liberal”, she told the audience of her wish-list for Irish society. “I am really happy to pay much more tax if I knew I was going to get people off waiting lists or to build social housing. I think the young people of this country have been stiffed the most, I think it’s appalling the way it is impossible to find somewhere to rent, and I think it’s appalling that there hasn’t been an underground built in this traffic-choked city.”

Despite ensuing calls of “Marian for President”, Keyes informed the audience that they won’t be seeing her name on the ballot paper any time soon. The Limerick native also confirmed that she won’t be donning sequins and a feather boa, explaining that despite being asked to participate in BBC’s Strictly Come Dancing “many times” her lack of rhythm would render her “the joke contestant”.

She admitted that her original title for the book, All Their Secrets, had been rejected by her editor

She may not be able to waltz but we all know she is well able to write, and the room fell silent and then filled with laughter as Keyes read a raucous extract from her latest book, entitled Grown-Ups. She admitted that her original title for the book, All Their Secrets, had been rejected by her editor, although Keyes loved it for its “US daytime soap” connotations.

“It’s set in Dublin and it’s about a family of three brothers, and their various wives and ex-wives and kids and adult stepchildren. They all spend a lot of time together and they all get on very, very well on the surface, but beneath the surface things are more complicated, as things always are, so some don’t get on at all and some get on far too well. It all comes out at a birthday party after one of the women suffers a concussion and starts saying things she shouldn’t say. It’s very plot-driven and it’s pacey, a lot happens, but it’s tender, I really cared about all of them. They are just like all of us, their lives are messy.”

The night also saw an exclusive announcement – Keyes confirmed she is a whopping 8,000 words into a sequel to her much-loved book Rachel’s Holiday, to be called Again, Rachel. The rowdy cheers that broke out suggest this is the Keyes novel her OG fans have been waiting for.

The ability to tell a good yarn is an inherently Irish trait, according to Keyes. “Irish people are so clever - we are curious and we are warm. Irish people are the most entertaining on the planet, we have such a gift for spinning out stories, for making a real song and dance about them.”

Keyes also had advice for aspiring novelists, agreeing with the old maxim that everyone has a book inside of them. “People kill me when I say this, but if you want to write, just sit down and do it. Your book will only get written if you sit down and write it. People think I am withholding the magic formula but I am not. It is hard work, it is tedious, it is dispiriting at times but it’s really worth it in the end. People don’t know how much they have to say until they actually start. We all have planets inside of us, we have so much below the surface that will come if it’s given that trigger.”

Fans at the exclusive event were treated to an array of treats from Green & Black’s including the latest addition to their range, Bark Bags coming in 3 different flavours; Hazelnut & Salted Corn, Salted Caramel & Almonds, and Orange, Almonds & Biscotti Bag.

Sisters Barbara and Michelle Bond are self-confessed “huge fans” of Keyes, and have read all 13 of her published novels as well as being avid followers of hers on Twitter. Their mother is well-known author Zoe Miller meaning they have more insight than most into how difficult it is to become a best-selling author.

“It’s really hard to write a book, it takes such a long time, with a good year on process and it might not even be a paying gig. With writers it’s a vocation. Our mum loves it and has been successful, but it can be a really tough job,” Michelle says.

“My mother had Watermelon in the home library and I remember taking it out one day and thinking it was such an amazing book – it was so real. Following her on Twitter means I feel I grew up with her, she is hilarious, and she is still so relevant for all generations. I already have tickets for her event next year in the National Concert Hall,” said Barbara.

Students Neasa Howley from Tipperary and Akriti Gupta from New Delhi came to know Keyes through Twitter. Akriti said she loved her last novel The Break and had meant to bring along her copy for Keyes to sign; when Akriti told Keyes this, the author immediately offered up her copy of Grown Ups, complete with autograph.

“I love her books, she is so funny, it’s the perfect read. She is able to appeal to a generation of women who care about much more than romance or beauty, she knows her audience are willing to talk about the harder issues but also wind down by talking about stuff like that. She really gets that mix right.”

“She is so interesting because she speaks out on things, she has her opinion and she makes it heard. She doesn’t try to get people on side, she just says what she is thinking,” Howleys says.

Roisin McKenna from Limerick was one of the fans thrilled by the news of a potential sequel to Rachel’s Holiday. “That’s my favourite book of hers. I am such a big fan, I saw her before in Limerick and I had to come tonight. It was such a lovely night, she is so funny.”

Novelist Sarah Maria Griffin was in attendance with her mum, and said she believes that Keyes more than warrants her “national treasure” status.

“I feel like she was ever present in my life. A friend pushed Rachel’s Holiday into my hands and told me I had to read it, that it was hugely important. I think Marian Keyes’ voice is unlike any other voice, it’s so clear and so funny and so warm. Even the way she speaks to audiences like this, there is such great texture to it, she is never just speaking to you about one thing.

“The Irishness that Marian has is extremely authentic and she brings the true essence of that with her, the authenticity of us at our finest is what Marian brings to the rest of the world. National treasure gets bandied about, but in reality she is ours.”

Founded in 1991 by husband and wife team Craig Sams and Jo Fairley, Green & Black’s is committed to creating a great tasting, innovative and ethically sourced chocolate.

Escape the ordinary with Green & Black’s.