Fans and authors attend event to celebrate Once, Twice, Three Times An Aisling 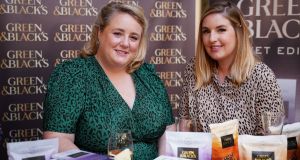 “We definitely see bits of Aisling in ourselves – maybe not complete Aislings, but about 42 per cent,” says Emer McLysaght.

Dedicated Aisling fans gathered recently in The Docklands, Cork, for a Green & Black’s literary event during a live recording of The Irish Times Women’s Podcast with authors Emer McLysaght and Sarah Breen.

They were celebrating the countrywide release of Once, Twice, Three Times an Aisling, the third instalment of their best-selling series chronicling the much-loved Aisling character.

The first two books in the Aisling series, (Oh My God, What A Complete Aisling and There’s Something About Aisling) have sold more than 254,000 copies to date, making them the bestselling Irish-published fiction titles of the 21st century. Pretty impressive considering the idea of Aisling started out as a Facebook page conceived by McLysaght and Breen at their flat in Stoneybatter in 2008. “We pulled together the many traits, characteristics and quirks of a very particular type of Irish girl we identified around us and one we identified with.

“Aisling is from the country – or more specifically ‘down home’ – and although she lived and worked in Dublin, you found her every Friday evening trying to beat the traffic on the N7 or the N4 or whatever route to take her back to her beloved BallyGoBackwards. She pounds the pavement to work wearing her runners with court shoes in her bag. She carries her lunch in a Brown Thomas bag saved from a trip to the Clinique counter last Christmas. She has never dyed her hair or lost a phone, she’ll always have the paracetamol ready for anyone who needs it and she’s the one making sure the handbags are safe on a night out. Thousands of women see themselves in her or they know her,” says Breen.

The women met while studying journalism at Ballyfermot College of Further Education in 2003. Breen is from Carlow and McLysaght from Kildare.

“We definitely see bits of Aisling in ourselves – maybe not complete Aislings but about 42 per cent,” says McLysaght. “Aisling is the kind of woman who has never had a parking ticket, and who ensures that her friends are celebrated to the best of her ability.”

Both feel extremely lucky that they get to write these books together. Published by Gill Books, they have committed to doing five books in total. They have also just recently completed a movie script based on the first book, Oh My God, What a Complete Aisling, which has gone to Element Pictures.

Breen says: “We know each other 16 years and we both know Aisling so well that the storylines just come easily. We don’t really argue about storylines. We usually have the overall story plotted out and we figure out what is going to happen at the beginning and at the end and we go from there.”

McLysaght says Irish women have an amazing sense of humour and this is captured in the books. “With the third book we wanted to give Aisling some real-life challenges. She is turning 30. She is back living at home with her mother in her mother’s house in Ballygobbard. Marriage and road frontage were on her ‘to-do’ list before she hit 30 but neither have happened. Her best friend Majella is expecting the ‘hen party’ of the century, while Aisling is in the throes of a fling with the handsome and mannerly blow-in James Matthews, so there is a lot going on and a lot to contend with.”

Aideen O’Driscoll from Cork said she had enjoyed every book in the Aisling series. “They are funny and touching and you get so caught up in every character. I think everyone knows an Aisling. There are parts of me in there and I recognise my younger sister, my older sister and some of my aunts.”

Julia White from Douglas said she followed both authors on Twitter: “They are very funny. Their books deal with real-life scenarios and their humour is just so relatable.”

Mother and daughter Geraldine and Clare Droney from Cork are big Aisling fans and were delighted to be at such a fun event – “the Green & Black’s chocolate and cocktails were an added bonus”, Clare laughed. She said she loved the 1980s’ references in the book like Rimmel’s Heather Shimmer lipstick – “it seemed to be the only lipstick shade available to us in Ireland during the 1980s and 1990s. I think they describe rural Ireland and every Irish person’s childhood so well.”

Geraldine said they captured the whole idea of ‘notions’ so well – “going out to brunch and having coffee dates at the garden centre, and sure we all go to the middle isle in Aldi or Lidl to buy things we don’t need. It is all real-life stuff and we get to laugh at ourselves.”

Moya Muldowney from Cobh said she read the first book in three hours – “I started it and I couldn’t put it down. It was so funny. I did the same with the second book and I will probably do the same with the third.”

Jennifer Buckley from Cobh said: “I think there’s an Aisling in all of us – from wanting to put up Post-it Notes in the office kitchen to rushing to make it down for the complimentary breakfast in a hotel. I love all the references like bringing the gym gear to work in an oversized Brown Thomas shopping bag. The excitement at getting to buy something in Top Shop when it wasn’t in Cork. I gave the first two books to my mum and she loved them too. They are just so relatable.”

Mum and daughter Rosemary and Orla Duane from Carrigaline follow the authors on social media. Rosemary said it was such a comforting read. “Everybody has been to those weddings, to that funeral and has met those guys in the GAA.”

Orla said: “I definitely have a bit of Aisling in me. I lasted 10 months in Dublin before returning to Cork. Someone bumped into me one day on the street and I remember calling Mum to say they did not even say sorry. So yes, I too came back to Mummy.”

Triona Dunlea from Gurranbraher in Co Cork said the books made her laugh and cry. “They are so touching. I didn’t want the first book to end. I am a complete Aisling. I would text my friends to make sure they got home safely after a night out. I would always have the lunchbag ready for work, the trolley tokens hanging from my keys. I have loyalty cards too for everything, and I would buy brown mascara to make my eyes bluer just because it said so in a magazine. I love that the authors brought this character to life and I don’t want her to end. She embodies the Irish woman in the big city. She is the Irish version of Bridget Jones.”

Founded in 1991 by husband and wife team Craig Sams and Jo Fairley, Green & Black’s is committed to creating a great tasting, innovative and ethically sourced chocolate.

Escape the ordinary with Green & Black’s.