Twinnings between Irish and Chinese towns and provinces are paving the way for opportunities in business, education, tourism and culture 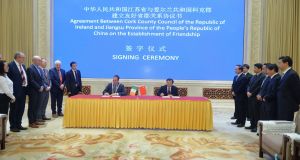 Mayor of Cork County Cllr Declan Hurley and Jiangsu governor Wu Zhenglong at the signing of the sister-city agreement between Cork county and Jiangsu in Nanjing November 2017.

Twinnings between Irish and Chinese towns and provinces are becoming more commonplace, paving the way for more opportunities in business, education, tourism and culture.

After the possibility of a twinning between Roscommon and a province in China was mooted, a delegation from Roscommon County Council has travelled to the Shanxi province in China, which was considered suitable due to both areas’ strong links with agriculture.

Patricia Bohan, administrative officer at Roscommon County Council, says they didn’t really know what to expect when they first started the process of twinning and they are still at the very beginning of that process.

“The purpose of the twinning is to develop a friendly relationship and enhance mutual understanding between the two communities, with a view to carrying out exchanges and cooperation in the fields of trade, culture and tourism that would be of mutual benefit. Roscommon County Council is open to exploring such possibilities to see what may develop.

“We expected that a delegation from China would visit Roscommon in the autumn but we were invited first to China and the cathaoirleach, Cllr Ivan Connaughton, director of services Martin Lydon and myself from the Ireland-China Friendship Association, went on the trip which was funded by the Shanxi Province. We also visited Henan Province and met with the vice-governor of two provinces outside Beijing. We went to many cultural events while there,” she says.

A delegation of 14 from Henan Province, led by its vice-governor, will visit Roscommon as part of a short three-day trip to Ireland and delegations from the Shanxi Province are expected early next year.

“We don’t know where it will lead but maybe there’ll be a possibility of an exchange of students or some business opportunities. They’re very friendly and want to meet people on a social basis before they’ll commit to anything. We are open to a relationship coming out of it and signed a friendship agreement to explore twinning, but nothing official has happened yet.

“We have seen no impact on businesses yet. We met people from Vancouver and Hungary when we visited China, and they are in a relationship with the Chinese for a number of years. They said that it’s working very well for them but it’s definitely a slow burn,” Bohan says.

John Forde from Cork County Council works in the economic development, tourism and enterprise department of the council.

The south-western region of Ireland has been involved with the Jiangsu province since 2013 and Cork City Council has a long-standing relationship with Shanghai.

“There are three steps to forming an economic relationship – one is a letter of intent to forge a relationship and in 2013 we signed that letter of intent. In 2016, we signed the next stage up, a memorandum of understanding. In November of last year, the mayor signed a sister-city agreement. There are a number of headings under which we have committed to building links and these are economic development, tourism, culture, heritage and education.

“It’s a slow burner and from our perspective, we were encouraged by the Department of Foreign Affairs to develop links.”

Forde says the Chinese regions it has links with have a high regard for politicians.

“When the mayor goes out there each year, it’s very easy to get access at the highest level to senior officials. We’re trying to establish ourselves as a bridge head to create links with the public sector out there, in order to facilitate education links and provide business opportunities,” he says.

CIT and UCC have strong links with a number of universities in China, including Xuzhou University.

“We would like to be able to maintain the links we have and bringing in students from outside the EU is a significant part of their strategic plan.”

But is it having any impact?

“If you look at Musgraves, who own SuperValu, and we are not taking any credit for this but they have a presence in the Chinese market. Dairygold, which is a large milk processor, are doing good business in China too.

“This year alone, we have hosted nine delegations from China, some political, educational and business. But it is a very slow process and it will take a couple of years to see any results but there is already business being done with China.”

In terms of tourism, Forde says they are starting to see small numbers coming to Ireland but it will grow very quickly in the next few years with direct flights from Dublin to Hong Kong.

There are also a number of smaller initiatives in place that are raising awareness between the two countries.

“We run a competition called the Shamrock Cup which is supported by the consulate in Shanghai. It’s an English-language competition for school kids – hundreds will turn up to speak in English on Cork or Ireland, and the winning team will come to visit us in Cork. The mayor will also visit the school where the winning team came from and will leave a collection of books from Cork with them.

“We also hope to have an exchange with interns from the government in the region and forge links at that level.

“These are all small initiatives in their own right but the whole idea is that we will build something tangible,” Forde says.