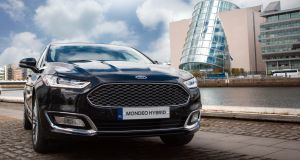 The Ford Mondeo HEV: Ford plans to invest $11 billion in electrified vehicles in the coming years

Ford’s first hybrid electric vehicle (HEV) has just made its debut on Irish roads. The Mondeo HEV combines the best facets of the hugely popular car with the benefits of hybrid technology. With its 2.0 litre 187PS automatic transmission petrol powertrain, the new Mondeo HEV will meet the needs of those who want a more environmentally-friendly car but who do not wish to compromise on space, driving dynamics, driving range and comfort.

Ciarán McMahon, chairman and managing director of Ford Ireland, believes now is the perfect time to launch the car in Ireland. “Ford has taken the electrification journey,” he says. “We’ve been on it for quite a while now. The Focus electric vehicle (EV) has been around since 2009, for example. We didn’t launch it in Ireland as we didn’t think the time was quite right for the market here.”

The Mondeo HEV is a more recent addition to Ford’s electric portfolio. “We introduced the Mondeo HEV towards the end of last year and we believe the time is now right to bring it to the Irish market. The market in Ireland has changed greatly over the past 18 months and there is a new impetus behind the electrified vehicles market here.”

The Mondeo HEV will have a particular appeal to a broad swathe of the market, according to McMahon. “It is the only family sized and fleet sized HEV in the country,” he explains. “We believe this represents a very big opportunity for Ford. It is our first hybrid launch in Ireland and it will appeal to companies that want to demonstrate green credentials.”

Familiarity is another plus. “Everyone knows the Mondeo and its great driving dynamics and specs. From that point of view, it’s the perfect vehicle for Ford to start its hybrid journey in Ireland.”

It also stands out in the market as many of the hybrids already on the market are smaller in size. “There is a great opportunity in this space for us. Also, when people drive it they quickly realise that it’s a beautiful car to drive. It has a petrol engine but has an electric powertrain and that makes it automatic transmission by default. It is a lovely, quiet drive regardless of whether you are driving on the petrol engine or the battery.”

Another strength is its fuel consumption. “It is very fuel efficient despite being a high-powered petrol vehicle. When you combine all these things together it’s a package that people understand and find attractive. One thing I would says is that people really do need to test drive the vehicle to fully appreciate it.

“Once people get in and drive it they are very impressed. The drive switches between electric and petrol power completely seamlessly and it’s very hard to tell when it happens. That’s to do with the way it has been developed. The petrol engine has been specifically designed for hybrid electric vehicles. The overall package is excellent and anyone who has got used to other hybrids will be very pleasantly surprised by the Mondeo HEV.”

Looking to the future, McMahon believes it will not be too long before all cars are electric, either hybrids or pure electric with consumer demand and other factors driving the change. There will also be pronounced differences in markets which will continue to be influenced by local factors.

“Our HEV offering in the US has been very successful,” he says. “We recently announced plans which will result in further investment in EVs there. In the US, SUVs rather than saloon cars are very much seen as the future. There is a huge market shift over there.”

Technology is among the key forces at work in this quiet revolution. “The industry is changing rapidly and technology is changing even faster. Battery technology is advancing all the time and costs are coming down. All of a sudden, what people were trying to do 10 years ago with EVs has become potentially viable for the market.”

Mindsets have shifted as well. “People are thinking differently than they were five years ago,” he notes. “An electric vehicle is now seen as an affordable option by a lot of people. The SEAI grants and the Government VRT rebates are important as are the falling costs of the cars themselves. When you put all that together EVs are now in reach for many people from a cost perspective.”

Minds are also being put at rest. “People ask if an EV is suitable for them and one of the main concerns up until now has been range anxiety,” McMahon points out. “The fear that their battery will go flat while on a journey has been a huge concern, but this is being resolved. Ten years ago the range was 150km or less but this has now doubled. We also have more charging points now; there are around 2,000 and the number is growing but that is still nowhere near what we need. Range anxiety is becoming less of an issue, nevertheless.

These factors have led to a major shift in the environment regarding EV acceptance, he adds. “The cost of vehicles is coming down, the charging point infrastructure is improving, and EV and battery technology is advancing. Lots of people now believe they could own an EV at some point in the future.”

And Ford is putting its money where its beliefs are in this respect. “We plan to invest $11 billion in electrified vehicles in the coming years. We will launch a plug-in hybrid Transit van next year and by 2020 we will have a fully electric small SUV on the market. The iconic Ford Mustang will also come out in hybrid format in 2020. This will represent another significant step in the electrification journey for us.

“Range is extending all the time as well and it is expected to be 450km only two years from now,” he continues. “That’s not far off the range of a full tank of petrol. That’s where the tipping point will come. When Ford and other manufacturers reach the point of where the range is equal to a full tank of fuel, about 600km, we will have dealt with the anxiety issue. Everything is starting to come together and we are seeing a huge change in the market. Electric and other fuel sources have their part to play in our future and we will continue to advance in the development of superior performing petrol and diesel engines.”