If we want to decarbonise energy, heat pumps are the way to go 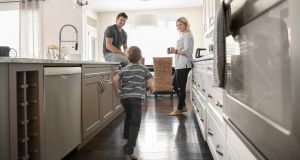 A heat pump uses 60 per cent less carbon per unit of heat produced, so for every unit of electricity used you get back between three and four units from the heat pump. Photograph: Getty Images

The Government’s Climate Action Plan envisages 600,000 heat pumps being installed in Irish homes by 2030. Of that, 400,000 will be retrofitted to existing homes, mainly to replace oil fired boilers. The remainder will be installed in new homes. But what are heat pumps, and why are they such a big part of the national climate plans?

A heat pump is a modern, low carbon heating system. It performs the same function that a boiler does but has a much lower impact on the environment. As we are so dependent on fossil fuels, including oil, gas and coal, heating our homes and hot water accounts for around 33 per cent of our energy-related carbon emissions. By installing heat pumps instead of boilers, we could reduce this drastically without impacting on people’s quality of life or daily habits

A heat pump can heat a house even on the coldest of winter days, when outside temperatures can be as low as minus 18 degrees Celsius.

“Think of them as a central component of decarbonisation,” says Tipperary Energy Agency chief executive Paul Kenny. “Of all energy related CO2 emissions, around 33 per cent are from heat. If we want to decarbonise energy, the heat pump is by far the most impactful technology out there. At present, a heat pump uses up to 60 per cent less carbon per unit of heat produced, but that will rise to 90 per cent or more as more renewables are added to the electricity network.”

The financial savings are also very significant. “For every unit of electricity used you get back between three and four units from the heat pump,” he says. “That’s really important for the move to low-carbon heating.”

A unit on its own, without any additional insulation or other work to the home, costs around €11,000 for a typical three-bed house. “You get a €3,500 grant from the Government and with savings of around €1,000 a year there is a payback time of six to eight years. If you ask any of our 250 heat pump customers they’ll tell you they are good value and deliver warm and comfortable homes for a fraction of the cost of their previous heating system.”

Reaching the Government target will be a challenge but is achievable, according to Brian Montayne, ESB’s electrification of heat manager. “Building regulations have gradually driven new home construction in that direction,” he notes. “They require new homes to have some element of renewables, either through a combination of a gas/oil boiler and solar panels or a heat pump instead of a boiler. The heat pump works out at a similar cost to the combined gas and solar system, so there is no resulting impact on the build cost  of new homes. In fact more than 50 per cent of new homes constructed in 2019 have adopted heat pumps, so there is clear evidence that the developer community are embracing the lower carbon alternative.”

But the numbers set out in the Climate Action Plan are challenging nevertheless. “We need to be putting heat pumps into about 90 per cent of all new homes constructed over the next 10 years. But the big challenge is in retrofit. This is moving our existing housing stock away from fossil fuels to what could be considered new technology.”

But it’s not new at all. “It’s effectively the same as air conditioning and has been around for almost a century,” Montayne explains. “And it looks like an air conditioning system at the side of a house. Around one million heat pumps were installed last year in Europe where they are very common, and around 10,000 units will be installed in Ireland in 2019. That’s a relatively modest number compared to the rest of Europe.”

Behavioural change is part of the issue. “It requires a change in how people manage their heating. Traditionally you switch boilers on and off as needed. A heat pump is regulated to maintain the preferred comfort setting of the homeowner. You set the thermostat for 20 or 21 degrees and the heat pump will go on and off to maintain that temperature. There is a misconception that they are always on, but that’s not the case. They only come on when the house falls below the desired temperature.”

You can control it in much the same way as a gas- or oil-fired system. You can set it for a lower temperature overnight and can have varying settings for different zones in the house. You might want 18 or 19 degrees at night when you are in bed, whereas you might want 20 or 21 during the day. It’s up to the householder how they choose to manage the system.

Heat pumps are a zero carbon technology at the point of use, delivering significant local, environmental and health benefits

There is also a perception out there that a house must be sealed with the windows closed to make the system effective, but that is not the case according to Montayne.

“If you air the house for half an hour you are not going to lose much more than a degree on the coldest day, so that won’t have an adverse impact on the performance,” he says.

“If you go on holiday you might turn it off or set it to a much lower temperature, but you can set it to come back in advance of your return. You can easily manage all this once you get used to it and most models have phone apps to make the user interface simple - no one is expected to change their lifestyle.”

Heat pumps work most effectively in well insulated houses, so while the base cost of a heat pump unit may be relatively affordable, the cost for older, less well insulated houses can mount up. “If you are undertaking a retrofit project to bring an existing home up to a minimum B2 standard, the overall cost can be high as it includes the capital cost of insulation, replacement windows, ventilation systems, and the replacement of radiators and circulation pipes,” he says. “But the fact is that 25- or 30-year-old radiators, and their associated distribution system, will probably require replacement in any case.”

While ESB is not directly involved in the supply and installation of heat pumps, the organisation is eager to promote them as they recognise that electrification of heating will help to decarbonise the energy system and offer long-term cost and environmental benefits. “About 700,000 homes in Ireland have oil-fired central heating systems combined with very poor fabric thermal performance.”

“Heat pumps are a zero carbon technology at the point of use, delivering significant local, environmental and health benefits,” he adds. “While it is very difficult to put an economic value on health, everyone appreciates a healthier living environment.”

He accepts, however, that cost considerations will come into play and believes that part of the solution to stimulate retrofit lies in low cost finance. “It’s very difficult to get low cost finance for it,” he says. “It would be imperative to get the financing proposition to an affordable level over a 10-year period say, so that it makes compelling economic sense for the homeowner. That way, people will be able to make long-term cost savings, while at the same time contributing to the decarbonisation of the energy system.”

Find out how ESB is creating a brighter future at esb.ie/brighter-future