Heating and transport on the frontline of battle against climate change 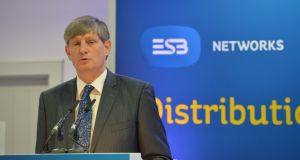 Ireland, along with its partners in Europe, has committed to a low carbon future, with targets for a significant reduction in carbon omissions that must be reached by 2050.

To do that, certain industry sectors and consumers must think radically in order to make the changes required, particularly in sectors where emissions are highest.

Pat O’Doherty, Chief Executive at ESB says the electricity sector has an important role to play but electricity generation only accounts for about a fifth of all carbon emitted in Ireland. “Three quarters of Ireland’s national carbon emissions come from agriculture, heating and transport. Given the limited potential to reduce emissions from agriculture in the short-term, the immediate focus turns to transport and heating,” he says.

Three quarters of the energy consumed in heating and transport in this country comes from fossil oil - a far higher proportion than in the rest of the EU. This is contributing hugely to Ireland’s carbon emissions. In 2014, Ireland consumed 6.25 million tonnes of oil, the vast majority of which went towards heating and transport. By 2050, Ireland has to reduce this by 90 per cent if it is to meet its national targets.

O’Doherty says that over the last decade, the sector has changed dramatically and further “disruption” is likely.

“Climate change is one of the biggest drivers of that change and the need to decarbonise electricity is a reality that we are embracing every day in ESB. It is at the heart of our strategy and the lens for our innovation and investment decisions. However, we have to balance this agenda with the need to maintain a reliable and affordable service for our customers,” he says.

In tackling climate change, the ESB has four strategic priorities. These include:

In terms of the role the consumer plays, O’Doherty says, because of their relative newness, electric vehicles have a higher purchase price than conventional cars however, several factors reduce the overall costs to the driver. These include a zero rate of VRT relief of up to €5,000, purchase grant for up to €5000, lower road tax of €120, reduced maintenance costs (due to fewer moving parts), plus dramatically lower fuel costs. For certain car models, the driver purchases the car and leases the battery.

ESB has developed a cost calculator that allows consumers to identify cost savings in real time. For example, a consumer that travels 200km per week spends, on average, €21.60 in a conventional petrol car, €15.74 in a conventional diesel car and €2.54 on an electric car.

Ireland has one of the most advanced and integrated EV charging infrastructures in Europe, which has been installed by ESB. To date there are 1,200 public charge points for EVs across the island of Ireland connecting all main urban centres, as well as a number of fast charge points on major urban routes. The EV network in the Republic is completely inter-operable with that of Northern Ireland, which means an EV driver can now drive seamlessly from Cork to Belfast using a common charging system from start to finish.

When X_Site projects reach the stage where a business case has been proven, a decision will be taken as to whether the follow-on business growth activities will take place at X_Site or back in the main business environment within ESB.

“It is anticipated that projects at X_Site will be of typically three to six months in duration, comprising small teams of two to three people. ESB Innovation will communicate with each part of the business to further the identification of new business propositions for consideration at X_Site,” O’Doherty says.

Ireland’s first ever energy hackathon, The Big Energy Hack, is being run this weekend by ESB. It will see many great minds come together for over 48 hours to disrupt, invent and innovate, with the aim of developing solutions for a low carbon future.

“The event is at full capacity with 150 of the best and brightest minds in Ireland from a diverse range of fields including IT, innovation, marketing, design, finance and entrepreneurship, registered to unearth smart ideas that could help lower carbon emissions and combat climate change - through smarter energy efficiency in the home, enhancing the ecar experience and optimising the electricity network,” O’Doherty says.

​The Big Energy Hack participants will explore new ways of powering homes, transport and the electricity network including ways ESB can empower customers to be more energy efficient in their homes; enhance the ecar driving experience and improve the reliability and quality of the electricity supply.