What if the business model we apply to the charity sector is fundamentally flawed?

Activist, author and entrepreneur, Dan Pallotta returns to Dublin to present his ideas as part of an event organised by Charities Institute Ireland on November 12 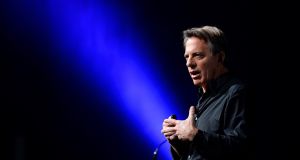 Dan Pallotta: “Without knowing it, and without intending it, we have put the non-profit sector in an economic prison, while allowing the for-profit sector to roam free.”

Ireland has a solid history with charity, the country is currently ranked 5th most charitable in the world in a survey carried out by the Charities Aid Foundation. Over 190,000 people are employed by registered Irish charities, and over 300,000 people volunteer. But what if the business model we apply to the charity sector is fundamentally flawed, and what if there are better ways to do it?

That’s the point put to the test by entrepreneur, author, and activist Dan Pallotta, whose Ted Talk on the charity sector has racked up almost 5 million views. “Without knowing it, and without intending it, we have put the non-profit sector in an economic prison, while allowing the for-profit sector to roam free,” he says.

Pallotta is not just talking theory, the events that he pioneered in the US, such as the Breast Cancer 3-Day walks, and the multi-day Aids Rides, raised in excess of half a billion dollars in nine years and were the subject of one of the first Harvard Business School case studies on social enterprise.

At the crux of the problem is a fallacy in how we think about charity, he suggests. “When someone supports a charity, you have to understand what that person really wants,” he says. “They really want problems to get solved. They genuinely want people experiencing homelessness to be helped, and tremendous progress in disease research, and for clean water in developing countries - that's what they want at the end of the day.”

“But what they've been trained to think they want is charities that have low overheads and low salaries. Somewhere along the line we've managed to confuse people into thinking that the two things are the same, when in fact the two things are more often than not, completely opposite,” he says.

Pallotta is returning to Dublin to present his ideas as part of an event, Bolder Board Training, organised by the Charities Institute Ireland (CII). While Pallotta has run the training workshop across the world, last year’s event in Dublin drew the biggest attendance, with many Irish charities and their corporate partners in attendance.

CEO of Charities Institute Ireland, Liz Hughes says that event sits closely with the mission of CII, and provides an opportunity for corporate partners to support and engage in a new way. “We work with Ireland's leading charities, and particularly those that have a reliance on fundraising for their existence. So our purpose is to influence stakeholders across the board and to support the charitable sector by showcasing the work of the sector.”

“Within the corporate world you have senior managers and leaders who are on charity boards. So this is a great opportunity to hear from a thought leader,” says Hughes. “Most of the corporates have charity partners that they invest in financially, and through volunteering. So this is a chance for corporations to support their charity partners and also make an investment in their own business development.”

“It’s something I didn’t appreciate until I entered the sector, but under the current structure it is very tough to plan ahead,” says Hughes. “Even if you have government support, that grant might only be secure for a year or two. With fundraising you don't know how much you're going to get each time. It's very hard to be strategic when you don't know what your income is going to be for the next year. So many people are reliant on services provided by the charity sector, whether it's mental health, home care, cancer research, or homelessness. All of those are huge social issues that are currently trying to be met by the charity sector.”

The support for new ways of thinking about fundraising struck a chord with attendees to Pallotta’s last training in Dublin, according to Hughes. “The response we had to Dan was just phenomenal. Lots of our members are taking Dan's advice to heart. It really is encouraging a vitally needed change in the sector,” she says.

“The objective of the day is to bring your board and leadership team together and to work collaboratively on your strategy, to be bold and imagine the impossible - possible.”

“We also have many organisations who attended last year coming back again,” she says. “Last time it might have been just the CEO and board chair that attended, and this year they're looking to bring more of their key people in, to refresh themselves in the training and to bring new members up to speed.”

“I've been to speak and lead trainings across the world and everywhere there is this ancient notion that sacrifice is somehow the path to social change, but that isn’t the case,” says Pallotta. “Real social change, like reducing world hunger, having more vaccination coverage, and access to clean water, comes about through economic development. These economic booms may lift up 90 per cent of people, but there are always 10 per cent of people left behind, and the non-profit sector exists to take care of those people. There is nowhere in the world where sacrifice works as an effective model for taking care of those people, that approach simply isn't working. Innovation, and bold goal setting, and economic freedom for the non-profit sector: I think those are more likely to be the answers we need.”

The event is on November 12th in The Round Room, Dawson St, Dublin 2. Tickets are on sale now, via charitiesinstituteireland.ie/bolder-board-training