Zipping along: “We came out the other side with a great sense of achievement” 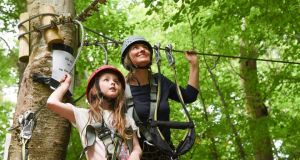 Margaret Healy: “The best part of the day was being so focused and utterly in the moment with the children from start to finish.”

Fear can often stop families from taking on new challenges but as Margaret Healy, along with her daughter Evie (6), her sister Alice and Alice’s kids Max (10) and Emily (12) found out, new adventures can help people overcome those anxieties and bring everyone closer together.

Why did you choose zip-lining as your family day out?

My daughter Evie turned 6 in June so I was looking for something fun, challenging and adventurous that we could both manage along with my sister, Alice and her two children Emily and Max.

Alice suggested zip-lining but I was a little bit concerned about the suitability for Evie. However, a quick call with Squirrel’s Scramble in Kilruddery put my mind at ease – as long as I was doing the challenges alongside Evie, I felt things would be ok.

I expected we would have a good family day out together, try something new, have fun with the children and make some happy memories. I was still a bit concerned about the climbing and zip-lining and whether the grown-ups would be as fit and brave as the children. Evie on the other hand thought it would be easy.

I’d like to think we do. I’m ever-conscious of spending as much time as possible with my daughter and not squandering the precious time I have with her before she grows up all too fast. To this end, I try to live in the moment with her each day and join in with whatever games or activities she’s involved in.

When we’re out and about, which we are a lot, we go into museums, galleries, parks, restaurants and explore anything new we come across. We go to parks, beaches, swimming pools and the zoo. Where possible we do this with my niece, nephew and sister, too - it’s nice to keep the cousins close. However, this day has made me think that maybe we should try to visit and experience new places as much as possible. Evie said afterwards, ‘I wish this could happen all the time’.

Alice and I both learned that we don’t try new activities enough. I already knew that Evie was adventurous, brave and determined but this shone through more than ever. After our short but thorough lesson, the first challenge we did was walking along a rope with two ropes to hold either side, high above the ground - I was slightly terrified. I tried to encourage Evie, even though my own stomach was in a knot, but I was getting nowhere. So not one to believe in forcing children to overcome their fears and feeling slightly relieved myself at the prospect of climbing down, I said “that’s okay, let’s forget about it”. I was not to get off that lightly however. Evie got down, took a moment to recompose herself and then said “okay mom, we can do this” and nothing could stop her getting back up and trying and trying until she’d done it. After that it was onwards and upwards. Meanwhile, Emily and Max were tearing ahead through the challenges.

I learned that Evie is an even braver, more determined and adventurous girl than I had realised. Further on, she persuaded herself to do two of the zip-lines and was really happy and proud of herself at the end of the day. I was interested to see how intelligently and maturely she was approaching facing these fears. She weighed them up and understood that it meant something bigger, to be able to get through these things, to not give up even if she was afraid. Evie learned that I too can be afraid and want to give up, but that I can battle on.

The best part of the day was being so focused and utterly in the moment with the children from start to finish. We lost ourselves in it and came out the other side with a great sense of achievement and exhilaration. Alice said she found that she, Max and Emily talked more than usual as they went through the challenges. I found I completely switched off from any stress I’d been carrying around. You might think a day doing absolutely nothing would help with that, but this concentrated activity helped more. Evie says her favourite part was finding out that she was brave and that she tried.

Yes, 100 per cent. We will try this again, and are planning our next trip already. Also, we’re intending to look up some other adventure activities we can do together. We both tend to leave this kind of organised activity for holidays abroad and don’t investigate the possibilities at home. Sometimes that’s budget-related but really, we’d spend as much on a trip to town or Dundrum.

Family is everything to me and I don’t really see the point in spending time without them. Work is entirely a means to an end, the end being to have enough money to get by and enjoy time with your family. I would spend all of my time with my daughter if I could.

The “trying new things” bit is really important though. I think it’s important to foster a sense of excitement and possibility about life in children. If they can feel that about the world they live in, they will hopefully always be happy, excited and feel like they can do and achieve anything they want in it. Seeing their parents do that and experiencing it together can only be a good thing.