A family adventure: ‘It was a real moment we would always remember’

New series: To celebrate families in the outdoors this summer, and ahead of the Freddo Family Camps, we sent a family of six to try paddle-boarding in Kerry 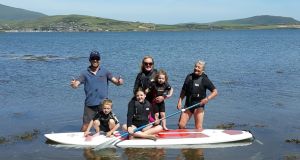 Kerry couple Sherma and Barry McBride, along with their children Seoidin (9), Barra (5) and Laia (3) and Sherma’s mum Joan

To get their families into the great outdoors, Kerry couple Sherma and Barry McBride, brought their children Seoidin (9), Barra (5) and Laia (3) and Sherma’s mum Joan on a day trip to Dingle to try paddle boarding, something none of them had ever tried before. We caught up with them afterwards to discuss the day.

Why did you choose paddle-boarding for a family day out?

We chose it because it seemed like a watersport that could be mastered relatively easily. As a family we have been stuck in a rut of always going to the beach – simply because it’s easy. We are forever saying we will push ourselves to try kayaking or surfing but there is always the fear that one of the younger ones will have a meltdown and it’s suddenly stressful and a complete waste of money. When we decided to try paddle-boarding, Edward Lacey who runs Wild SUP Tours in Dingle, reassured us that he had ways and means of ensuring the youngest two would be safe, while enjoying themselves too.

To be honest, we half expected that one of us would need to stay back with one of the younger two, harbouring resentment towards the other luckier one – which has happened with ice skating and other activities in the past. We were absolutely delighted when Edward and his partner Oona announced that they would be taking the two younger ones on their boards. My mother and nine-year-old braved a board themselves, as did Barry and I.

Edward brought us to the most beautiful and secluded lagoon in Burnham Wood in Dingle Harbour. The sun was glistening on the water and fish were hopping out, much to the delight of my youngest two. My mum and Seoidin lost their direction once or twice but once they mastered it, they looked like experts. When I managed to stand for the first time, I felt exhilarated.

To be honest, we tend to stick to the beach or a mountain hike. We really needed a challenge like this to push us out of our comfort zone and remind us that it absolutely is possible to do new things with small children. The guides can judge the right level of activity on the day and it’s a case of asking yourself, “What’s the worst that can happen?”

I learned that children really need new experiences to grow. Barry said he felt closer to the children than he had in a while, he works longer hours than I do and often has less time with them. I watched Laia on the board with Oona and her eyes filled with tears at one point and she called to me once or twice as I was trying to master the board myself. My instinct was to paddle over but Oona calmly paddled to a part of the lagoon where fish were leaping and within minutes she looked like the happiest three-year-old in the world. So we learned to let go and let them feel the adrenaline. I also learned that at 66, my mother is fitter than any of us!

What did you learn about the kids, through the experience and what did they learn about you?

We learned that children are far more resilient than we give them credit for. Seoidin had the time of her life and I realised that she deserves more of these kinds of memories as she grows up. I think it’s a day she will always remember. She has total belief in her dad, who is infallible in her eyes, but said she was surprised that her mum was able to stand up on the board. It was a good feeling that my children saw mum beating dad to the other side of the lagoon.

The best part of the day was when we all finally mastered the boards and were in the middle of the lagoon. Fish were jumping out of the water and there was a great sense of peace, but it was still a rush. Edward and Oona were showing the smaller children the fish and my mother and Seoidin were starting to really relax on their boards. The surrounding scenery was spectacular and I felt like it was a real moment we would always remember.

I definitely would because my mother and Seoidin have become addicted. My mother was laughing and praising herself and was on a complete high for the whole journey home. I feel like it gave Seoidin the kind of confidence boost that is invaluable at her age.

Children can get bored relatively easily and this day out has taught us to take chances, trust the younger ones – they can surprise you. Children can be hard work but with experts on hand a day like this can run smoothly and will use up some of the boundless energy they have at their disposal. Let’s face it, there is nothing better than exhausted children. The day was exhilarating, beautiful and memorable and there is no better place in the world than Dingle in the sunshine. We loved every second.