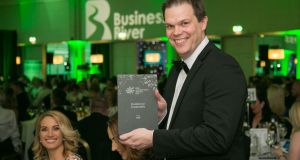 The Irish Accountancy Awards is celebrating its fourth annual awards ceremony with a record number of entries and attendees announced for May 16th.

The awards will also recognise Dr Laurence Crowley, former Governor of the Bank of Ireland, former Partner in KPMG Stokes Kennedy Crowley Chartered Accountant and a Fellow of the Institute of Chartered Accountants in Ireland, who becomes the recipient of the inaugural Outstanding Contribution to Accountancy Award.

Dr Crowley will address the awards gathering in an acceptance speech which is set to be a highlight of the evening.

Since its launch in 2015, the awards have grown year-on-year, with this year’s 87 entries signifying a 40 per cent  increase on 2018. Attendance at the event has also increased with more than 400 people expected for the big night.

The awards have become renowned as the benchmark for those who are leading the way in the Irish accounting profession, with 16 categories to be decided by an expert panel of judges. This year’s awards has seen a particularly high level of entries for "Medium Practice of the Year" and "Advisory Team of the Year." Other standout categories include:

A quick perusal of the list of nominees demonstrates the broad range of accountancy practice types and industry sectors represented across the categories. Those shortlisted include: AccountancySchool.ie, KPMG Ireland, O'Connor Pyne & Co, Abbott Ireland, Paddy Power Betfair and Kerry Europe.

Oriel Lawton, a partner in O'Connor Pyne & Co, said that:  “We are thrilled to be shortlisted in four categories this year. We are delighted to gain recognition for our high-quality graduate programme which is a credit to our staff and management team. Our tax team is also deservedly recognised in being shortlisted in the Tax Team of the Year category. The awards are a fantastic opportunity to recognise accountants and firms for their achievements.”

Patrick Cooney, chief financial officer for Kerry’s Taste and Nutrition business in Europe said: "We’re very pleased to be shortlisted alongside other significant Irish based firms. It’s testament to the strategic leadership and partnership we provide our internal customers right across the European business that we’ve made this shortlist and a deserved recognition for the team.”

Anne Keogh, chief financial officer and chief operating officer at Pharmapod, leads an expert judging panel that includes industry leaders from not just the accounting sector but also closely related peer groups, such as the Dublin Chamber of Commerce.

“Now in its fourth year, it is astonishing to see the standard of application we are receiving. Every year we are seeing an improvement in both the quality and the number of submissions. The candidates are really driving the standards of excellence for these awards.”

Barry Dempsey, chief executive Chartered Accountants Ireland said, “Chartered Accountants Ireland is delighted to support the Irish Accountancy Awards. The awards play an important role in recognising the achievements of the profession and highlight the central role it plays in continued economic growth. We view the initiative as being of considerable value to the profession and look forward to participating in the judging process and making our members aware of the benefits of entering.”

Chief executive CPA Ireland, Eamonn Siggins said: “CPA Ireland are delighted to support the Accountancy Awards again in 2019. In supporting the awards, we are supporting the achievements of our members who have both been nominated and won numerous awards over the past number of years. The role of the accountant is continuously evolving and by utilising technology, the Accountancy Awards recognises the contribution, commitment and impact that our members are making in the world of accountancy.”

Among this year’s event sponsors are Sage, a business software company with a keen interest in the accounting sector.

“Together we’ve been handling accounting, compliance and global changes within businesses for more than 20 years, and the combined experience of Sage and accountants across Ireland speaks for itself. It’s an exciting time as data-driven cloud technology permeates the profession, enabling accountants to offer businesses even more value and wider strategic advice. Accountants are the true heroes of the Irish economy, and we are delighted to support these awards, recognising their invaluable work.” said Barry Murphy, managing director, Sage.

Dave Malone, president – International, Confirmation said that:
“Confirmation is thrilled to support the Irish Accountancy Awards. Having worked closely with Ireland’s leading accounting firms to automate their audit confirmation process through our online platform, we’re happy to recognise the contributions Ireland’s accountants are making to businesses around the world.”

[To read about other BusinessRiver events visit their news hub.]

Practice of the Year / Sponsored by Capitalflow

The winner of this award will be announced at the awards ceremony on May 16th.

Large Practice of the Year / Sponsored by Circit

Medium Practice of the Year / Sponsored by Relate Software

Small Practice of the Year / Sponsored by Big Red Cloud

Finance Team of the Year / Sponsored by Axon Outsourcing

Tax Team of the Year

Advisory Team of the Year / Sponsored by Xero

Finance Director of the Year / Sponsored by Accounts IQ

Employer of the Year / Sponsored by Cpl

Accountant of the Year / Sponsored by Sage

Young Accountant of the Year / Sponsored by CPA Ireland

Part-Qualified Accountant of the Year

Best Use of Technology in Accountancy & Finance / Sponsored by Confirmation

CSR Initiative of the Year