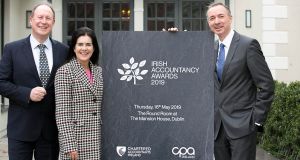 The Irish Accountancy Awards will return for its fourth year, with a gala dinner taking place at the Mansion House on May 16th. According to Eugene Bortolozzo, chief executive of BusinessRiver, who organise the awards, this year’s programme will build on previous successes: “The level of interest for the 2019 programme has exceeded all expectations with an expected 30 per cent increase in the number of entrants. We are particularly pleased with the engagement from accountants and finance teams from nonpractice areas such as industry and state organisations.”

“The awards are a great opportunity for accountants to have their work recognised and gain valuable publicity as a result. This year’s panel of judges is our strongest yet and we expect the bar to be set high. If you do enter and win an award it really says you are at the top of your game, which is a positive message to share with your team and clients.”

There are 20 categories (listed below) and there is no charge to make a submissions.

The extended deadline is March 15th and if you wish to enter, then a consultation with an awards submission consultant can be arranged by calling 01 5313834 or by emailing lauren@accountancyawards.ie

Visit www.accountancyawards.ie/ or call the entries team on 01 4070595 to find out more.

BusinessRiver is a leading operator of business communities and engages with professionals from over 30 sectors of the Irish economy. BusinessRiver runs a programme of over 50 events annually and has active engagements with more than 12,000 senior executives from Ireland’s leading private, state and FDI organisations. See more at www.businessriver.com