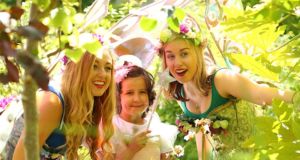 Fairies have long been a part of Irish folklore. Children eagerly awaited the loss of that first tooth, which would then be exchanged for payment from the fairies.

For kids, the magic of such events and the memories created cannot be underestimated. That’s why children and big kids alike are sure to love the Lough Boora Fairy Festival, an annual event held in Lough Boora Discovery Park in Tullamore, on July 22th.

The event, held in aid of Barretstown children’s charity, is now in its fifth year. About 5,000 people are expected to turn up for this year’s festival, which is extra special as the organisers are attempting to break the world record for the most fairies in one place. The largest gathering of fairies to date is 871 and was achieved by St Giles Hospice (UK) in Lichfield, Staffordshire, UK, on June 22nd, 2013.

Event-goers of all ages are encouraged to dress up in their best fairy costumes and play their part in the first ever Irish World Record Attempt.

There will be plenty of activities to entertain children of all ages across three stages on the day, as well as the Lough Boora Fairy Door Trail which is ready to be explored. Stage one will see the Irish Fairy Door Company’s resident fairies entertaining the masses with fairy tales, parachute games, giant bubbles and puppet shows with Fairy Clodagh. There will be a magical fairy note workshop where every child can write a special note and hide it inside their own balloon and release it at home.

Stage two features an arts and crafts area where kids can make everything fairy-related from fairy pencil toppers, fairy wands, finger fairies and stick fairies – an interactive hub for all ages.

The third stage will feature a kids’ disco with special dance lessons from fairy dancers.

Dee Ahearn, chief executive of Barretstown says: “We’re absolutely thrilled to be Bord na Móna’s chosen charity partner again this year. Family events at Lough Boora Discovery Park are always a fantastic family day out with children and adults alike speaking fondly of them. At Barretstown we must raise over €4.8 million each year to provide our programmes free of charge to families. Having successful partnerships, like this one we have with Bord na Móna, means we can help and facilitate all of our families and for that we are so thankful.”

Speaking at the launch of the festival, Sara Byrne of Bord na Móna says: “We’re always really excited about our events in Lough Boora Discovery Park with The Irish Fairy Door Company. This year is a little bit different as we’re attempting to set a world record. We encourage everyone to come dressed in fairy wings and a fairy wand so we can really smash this world record attempt. We’re absolutely delighted to be working with Barretstown again for the fifth year – being able to support the amazing work they do is something we’re incredibly proud of.”

Aoife Lawler, one of the co-founders of the Irish Fairy Door Company, says Lough Boora is the perfect location for a fairy festival.

“About three years ago Bord Na Móna came to us and said they liked what we were doing. They wanted to set up an annual fundraiser for Barretstown, and to make it a really big deal. Basically they wanted to bring the fairies to the midlands. At the time we were mostly operating in and around Dublin. We had made a fairy trail in Corkagh Park and a couple around Dublin so we knew we could do something nice. We thought, if we’re going to come together for Barretstown, with all profits from the day going towards them, then let’s do something really special.”

Fairy Avenue is now a permanent attraction in the park, and is home to 14 fairies including Birdie, Boo, Turry, Cabhair, Mac, Ruby, Gill, Rocky, Tipper, Dannan and Wanda. There is also a Wishing Seat and a Worry Plaque.

Lawler says that quite a few families from Barretstown will attend on the day.

“There are usually people from around the Tullamore area in attendance as these are people who are fighting big battles and won’t travel far. You definitely have families or friends of families who have been touched by it. It’s just a lovely, happy day for all.”

As well as the Fairy Festival, Lough Boora Discovery Park, which is owned by Bord na Móna and was built on repurposed bogland several years ago, has plenty to offer visitors all summer long including walking, cycling, angling and fishing. The park is a prime example of a cutaway area that has been developed as an amenity with high biodiversity value.

In fact, fairies aren’t the only creatures that will be flapping their wings there this summer, with a rare European butterfly only just discovered in the west Offaly bog after an absence of over 20 years.

The Marsh Fritillary Butterfly was last seen on Turraun Bog in 1995 but has been recorded back on the bog within the past week. Bord na Móna ecologists confirm the butterfly has returned to the area.

The head of Bord na Móna’s ecology department, Joe Lane, said “This is a discovery of big European significance. The Marsh Fritillary Butterfly is a rare and beautiful creature that we thought had disappeared but now we now know to have returned.

“We believe it has returned because of the extensive bog rehabilitation work that has taken place in Turraun and at the nearby Lough Boora Discovery Park but we need way more data on this project. That is why we are making a big appeal to people to go out there and find more examples of this and other butterflies. Go to our website, bordnamona.ie, and you will see a picture of the Marsh Fritillary so you know what to look for.

“We are asking people to photograph butterflies if they can and send the picture and details regarding the location to us at ecology@bnm.ie.”

The Marsh Fritillary is the only Irish butterfly that is protected at a European level and is a species that lives in wetlands and bog margins.

Tickets for the Fairy Festival are on sale now from loughboora.com.

With all the knowledge and experience built up since the 1990s, Bord na Móna is now a major driver in terms of peatland rehabilitation and restoration. As the company switches progressively to renewable energy, the need for the intensive and industrial production of peat will steadily decline. This will result in a significant land use change in Ireland, in both local and national terms. As soon as peat production stops in an area, natural processes coupled with targeted rehabilitation and informed management work to transform the former bare peat to a rich tapestry of habitats. These areas can have multiple potential uses - habitats for species, rich cultural landscapes for artists and observers to be inspired and to create, and a platform for amenity and tourism facilities for people to enjoy these new landscapes. Lough Boora Discovery Park is Bord na Móna’s flagship site to showcase these. Family events offer the chance to come and enjoy the park and explore the landscape.

Eco Rangers: Into the Wild

Are you a sustainability hero?

The woodland sanctuary at the heart of Body&Soul