The recession taught me how to make difficult decisions to protect my business, says hotelier Deirdre McGlone, who now helps women to build their own enterprises 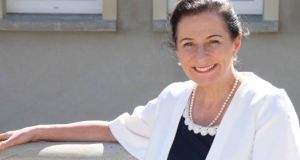 Deirdre McGlone: “It’s important for women to know that there are supports out there that can help them take an idea from the kitchen table to the boardroom.”

Visionaries inspire us. For Deirdre McGlone, owner of Harvey’s Point in Donegal, it was brother-in-law Jody Gysling who had the vision to see how a rundown cottage on 27 acres of boggy land could be transformed into one of the country’s premier hotel destinations.

It helped that the poor land in question was in a perfect location – on the shores of scenic Lough Eske. A Swiss national and globe-trotting businessman, Gysling had come to Donegal in 1983 in search of a holiday home. But thanks to the work that he and subsequently his brother Marc put in, over time the holiday home was transformed into a guest house, then a small hotel and, finally, the award-winning four-star property it now is.

Along the way they recruited local girl Deirdre. A European studies graduate of the University of Limerick, she had worked in France, Germany and London and took a receptionist job as a stopgap, but never left.

She and Marc fell in love, married and began their family. In 1996 they bought out Jody’s share in the hotel and set to work building a strong clientele, mainly through great customer service and constant reinvestment.

“Jody had the vision and is the perfect blend of hotelier and builder,” says McGlone. In recognition of the fact that women are the primary decision-makers for short breaks, he had an eye for such details as having good lighting and seating in bedrooms, which means women don’t have to do battle with steamy bathrooms to do their make-up in.”

McGlone is particularly committed to female empowerment and she’s been inspired by Paula Fitzsimons, founder of Going for Growth, a peer-led development programme for women who are looking to grow their businesses, which is free to participants.

“Paula has done so much to encourage women to get into business and to grow their businesses,” she says. “She’s a marvellous person.”

Like so many former participants McGlone now gives back to it, acting as a lead entrepreneur for a sister programme called Acorns, which is aimed at early stage, female-led start-ups in rural areas.

“I’m working with my third Acorns group now and I just love it,” says McGlone. “I knew from participating in Going for Growth just how open and caring women in business are to one another. Personally, participating on it gave me a space to work on the business rather than in it. And it can be lonely to run your own business – it can feel there is no one to bounce ideas off, particularly with a rural business.”

A combination of networking and positive peer pressure can help build confidence in women. “Too often women have a great business idea but not the confidence to convert that into a plan, or the connections to turn that plan into something that works. It’s important for women to know that there are supports out there that can help them take an idea from the kitchen table to the boardroom.”

McGlone says she was never overly confident herself. “It’s only over the years that I have gained confidence. I always had a belief in myself, but how to bring that out I just didn’t know.”

Continuing professional development helps. “It’s very important to keep seeing what’s out there, building your networks,” says McGlone, who is also president of the networking organisation Donegal Women in Business.

“Not alone is it a great way to learn by talking about things, sharing and collaborating, but it’s a key way to get new business too. It gets you out of your comfort zone, learning new things, and we have fun too.”

Fun is important to her, as is a positive outlook. “I’m very lucky. I’m doing what I love, where I love, with the people I love, so I couldn’t ask for more.”

But she’s resilient in the face of failure too. “I’m the type that will dust myself off and look on the bright side. In the past I struggled with being assertive because I’d be naturally inclined to go with the flow. I’ve had to learn to be tougher than that as a business woman. The recession taught me how to make difficult decisions too, in order to protect my business.”

Harvey’s Point blends family and work beautifully, but it’s important to maintain a healthy work/life balance too. For McGlone the key to that is having a good team around her. “I’m not afraid to employ people with better skills than me because it frees me up to look after the guests, which is what I love.”

It also frees her up to get out with her family in the great outdoors, hill walking and horse riding.“I grew up on Rossnowlagh Beach so the outdoors grounds me,” she says.

When it’s time to come back in she’ll put on a dress and do herself up, this time inspired by her mother. “She raised six kids and always liked to look her best and dress well with her hair and nails done. She took great pride in her appearance and passed that on to me,” says McGlone. “Fashion doesn’t interest me at all but I like being appropriately dressed and groomed for the role I play. It’s what she taught me.”