Plan your career and learn from the negatives, says Olympic Council’s Sarah Keane 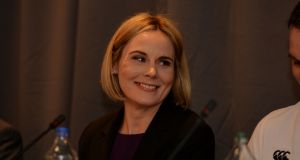 As president of the Olympic Council of Ireland and chief executive of Swim Ireland, it’s no surprise that sport plays a central role in Sarah Keane’s life. But more than that, it played a formative one.

As a child, the Dublin native started out in a “learn to swim” programme at her local pool. That led to club membership and, in turn, to a competitive career that saw her swim at national level and play water polo internationally.

Starting your school day with a 6am training session teaches you a lot about discipline but, for Keane, part of the appeal was that it was not part of the school day. “I feel the same for my own children. It’s very important for kids to have something in their lives that is completely outside of school. I loved the swimming club because it was boys and girls training and competing together; it was very social.”

Not for her mum mind you. “She’d often be outside sleeping in the car, or leaving the breakfast warming for me on a low heat back home. She had four kids and worked full-time too.”

Keane still competes, though only in open harbour sea swimming events. She swims twice a week during the working day too, in the National Aquatic Centre pool next door to her office. She does this not just because she loves it – she does – but to show her team the importance of a work-life balance.

“A couple of years ago I realised it was all very well for me to be sending emails at 1.30am, because I’m used to putting in long hours, but it was putting pressure on other people. I can’t tell my team about the importance of their having a good work-life balance if I can’t demonstrate it myself.”

Her ability to cope with long hours was honed in her early career as a lawyer. Though she still has a huge workload, she now has more scope to carve out a schedule that suits her. “I have young children so I like to spend time with them in the evenings and in the morning, and I don’t mind working late in my pyjamas when they’ve gone to bed.”

Now in her 40s, she believes the hardest time for many working women is their 30s. “You’re trying to move your career forward at the same time as you are most likely to have other things you are committed to, be it children or a relationship. But it’s a conversation that’s difficult to have because you’re afraid it’s sending all the wrong signals to your employer.”

If she has advice for the younger women coming behind her it’s to put in as much work as you can early on, in order to be in a better position by the time those pressures really take hold. “Graft so you can craft,” she says.

Swimming competitively helped her build resilience. “You learn to take negative feedback and to use it to help you do better in the next race.”

It’s a useful skill for women looking to move into positions of leadership. “If you take a leadership role, you are opening yourself up to criticism and that’s not easy to deal with. I think women can take criticism harder than men because we can take it more personally. We’ll get eight positive bits of feedback and two negative bits and all we’ll focus on are the negatives.”

Competing is good for personal reflection too. “You learn to see that a race that didn’t go your way is something that can be used to help you do better the next time. That resilience is something we need in life.”

It can help break the tendency women have to be hard on themselves. “We beat ourselves up if we miss the gym or if we eat the cake. I’m a great believer in forgetting about it and starting again tomorrow.”

You don’t have to be an athlete to have goals. “For me the life journey is all about personal development. I’ve been very lucky. I had a great family behind me and a good education, but I also believe in preparing for opportunity.”

In her case that included taking stock of her career in sport a few years ago and recognising that undergoing a leadership course would help her to build capacity as well as grow her networks.

I’m known for being a straight talker, as someone who is direct. I think it’s important to be authentic

“It has been very helpful to me ever since. I think as women we are trying so hard to manage everything on a day-to-day basis that sometimes we are not as focused on medium-term planning as we need to be.”

Prioritise yourself from time to time too. “If my four year old gets upset because I’m going for a swim I tell her this is my time; she should be telling me to have a good swim, like I do when she goes for hers. I think it’s very important that children realise Mums are people too. It happens automatically with Dads but women have to point it out.”

No better woman. “I’m known for being a straight talker, as someone who is direct. I think it’s important to be authentic. You have to be authentic in order to build trust,” she says.

We’re bringing the Be One. Inspire One series to life with a breakfast event. Join us at Roberta’s on Wednesday, May 23rd, when Sarah Keane, president of the Olympic Council of Ireland, writer Claudia Carroll and others will share their inspiration.