Lisa Coen and Sarah Davis-Goff, who set up Tramp Press four years ago, have published a string of successful titles 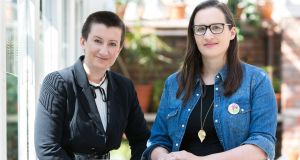 It might be a ‘slush pile’ but reading through thousands of unsolicited manuscripts is actually “like panning for gold,” says Sarah Davis-Goff who, with Lisa Coen, co-founded Tramp Press in 2014.

They’ve struck it too, with a string of successes from Irish writers such as Mike McCormack, Sarah Baume and Donal Ryan.

Little wonder their work inspires them. “It is a privilege that authors share the best of their writing accomplishments with us, and that they trust us to develop their work and bring it to readers. I’m inspired by authors who are working away creating meaningful art at great personal and financial risk to themselves, with no guarantee of job security or even of publication,” says Coen.

Risk is something she understands. “One of the things I learned from my PhD work on Abbey Theatre shows of the late 20th century was how things the theatre thought would work didn’t, and things they didn’t expect to work took off. I was talking a lot about risk and I realised that I wanted to be the one taking the risk, not talking about it,” said Coen.

She left academia and got an internship in the same publishing house where Davis-Goff was covering maternity leave.

“We don’t remember which of us first said we should set up our own publishing house but we do remember the planning. We spent about a year working on it, writing the business plan, building the website and all the other preparations – and it took off. Now I say to people, sure why wouldn’t you start your own business? It’s a lot easier than you think and if it fails, that’s okay. You just try something else.”

They also inspire each other. “The most important thing about the success of the company is, I think, that Sarah and I have a well-defined shared vision, so any decision is weighed against it. That clarity is one of the big reasons why she and I never fall out,” says Coen.

A healthy work-life balance helps. “I try to remind myself that describing yourself as busy and working all the time might sound very impressive but it can also be a product of poor time-management, and really, it’s often the result of a nervous ego wanting to tell everyone ‘I’m productive!’ So I try to be smart about spending time with my husband, getting out to exercise, going to see my family and making time to read, go to plays, whatever I need,” she says.

The pair recently hit UK headlines for announcing they would no longer accept submissions with cover letters addressed to ‘Dear Sir’.

“Our outspokenness has led to some angry letters but for the most part we get a ton of support from the industry, booksellers, readers, authors and all-round sound people,” says Coen, who has no regrets: “We’ve been called feminazis but by and large a sloppy letter doesn’t tend to come from a good writer.”

Davis-Goff reads most of the submissions, a job that invigorates her. “That feeling you get when you’ve read a book and loved it so much that you feel this need to share it with everyone you’ve ever met – that for me is what publishing is really about,” she says, attributing at least some of her career success to a propensity to daydream.

“Daydreaming is really important: it can be where you explore what you want to get out of life. I definitely spent about half my childhood staring out windows, imagining what I’d want my life to be like, and the other half reading,” she says.

“Work is always going to feel hard unless you’re doing something you honestly believe in and love. So find out what that thing is if you haven’t already – but give yourself permission to experiment, and to fail along the way.”

It’s okay to make mistakes. “So much of business is about experimenting, especially if you’re trying to do something new. Though we might not always reach the target we intended to, failure is never really a loss unless we haven’t learned something from it,” says Davis-Goff.

“I always had the feeling growing up that if I wasn’t falling enough learning a new sport for example, then I wasn’t trying hard enough – a little bit of failure is a good thing.”

Starting and building a business can be all-consuming, and not always in a good way, so learn to prioritise. “If you’re exhausted and it’s the end of the day, be realistic about what can wait till the morning – in most cases it’ll be pretty much everything on your desk,” she says.

“The occasional late night is no harm but if it’s a habit you’ll exhaust yourself. You yourself are the real priority, make sure you build a working system where you’re eating well and getting exercise and taking care of your mental health.”

Both she and Coen exude the fulfilment that comes from having found your niche. If you haven’t found yours, remember the power of ‘yet’ – in book terms, you’re a work in progress.

“All of these things take time to build and get right,” says Davis-Goff. “Nearly everyone starts out working some crappy job they have no feeling for, and having to figure their way out from there.”

You’ll know when you get there. “In the four years since we started Tramp Press, I’ve never once had a case of the Glenroes on a Sunday night,” says Coen. “I’m really lucky.”