Mature housing, good connectivity to the city and beyond, plus lots of outdoor amenities makes this north Co Dublin town a great place to raise a family 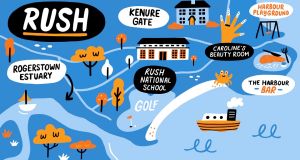 Rush is a popular commuter town for those looking for a strong sense of community, decent-sized family homes and a host of activities and amenities. Illustration: Aoife Dooley

Drive up the Dublin coast, along the sea past Malahide and, before Skerries, you'll come to Rush, the town once known as the market garden of Ireland. There is evidence of a settlement at Rush dating back to Neolithic times. Kenure House, two miles north of the village itself, was a large mansion that formed part of the 17th-century manor of Rush.

It has no fewer than two beaches to its name. “From my house, I'm looking at rolling fields and the ocean,” says Sharyn Hayden, owner of Skinny Batch bakery and café in nearby Lusk, a Rush native who grew up here and, after a few years away, returned with her family. “It's been amazing to be here, especially this year,” she says. “We could get out and have these epic 5km walks – with fresh air and space and the sea.”

Why move to Rush?

At 31km from Dublin city centre, Rush is a popular commuter town for those looking for a strong sense of community, decent-sized family homes and a host of activities and amenities for children and adults alike, with strong transport links to the city. Depending on traffic, a drive into the city can take from 40 minutes by Google Maps’ estimation.

“We were living in Dublin and I was expecting my second child,” says Hayden, of her and her husband's decision to move back in 2014. “There's a sense of belonging for us, and for them, and for their childhood. Friends I made in primary school here are still my friends.” She is full of praise for the town's sense of community spirit. “You'll always hear, if someone's going through something, 'I didn't have to worry about the grass being cut.' It's just done,” she says. “People really rally around in times of crisis, or in times of happiness.

Serviced by both the 33 and 33X Dublin bus routes from Dublin city centre to Skerries, it is a straightforward commute from the capital. There's also a train from the station at Rush and Lusk, around 3km away, offering Dublin and Dundalk commuter services.

If you're driving, Rush is right off the M1, meaning it offers a speedy route to Dublin Airport, and a direct road to Belfast, an hour-and-a-half journey north on the M1 and A1.

One of the most appealing aspects of a move to Rush is the sheer choice available in terms of properties, with plenty of family homes available with three and four bedrooms.

Golden Ridge Avenue is another much-loved choice, just off the Skerries road, with an ideal location in Rush village, close to both north and south beaches.

The beaches are the focal point of life in Rush. “The Rogerstown Estuary is fab,” Hayden says. “The sailing club is on it and the rowing and sailing clubs often do trips out and back from Lambay Island, which is cool, and there are plans for a playground and walking trail.”

There is a playground in situ already, by the harbour and there are walkways, a heritage trail, watersports and “great annual celebratory stuff”. One of the highlights of the village’s yearly calendar is the Rush Harbour Festival, which takes place on the August bank holiday weekend, and, “there's big excitement around the Christmas tree lighting ceremony”, she adds. Last year's celebrity tree-lighter was none other than Hollywood actor Brendan Gleeson, “which was a really well-kept secret and a surprise for everyone!”

Hayden reels off a list of clubs, societies and activities, from Pilates to hiking and cricket, as well as giving some insider tips – “Caroline's Beauty Room does the best nails”, she says.

Rush boasts both a Tesco and a SuperValu (for the sausages), and, “There are lots of great restaurants and bars in Rush”, says Hayden, offering a list of options including the Harbour Bar, the Strand Bar and Walsh's pub. “Jack the Bachelors is a newly opened restaurant. The Guilty Goat does coffee, breakfast, sandwiches and cakes – and Café Verde opened during lockdown. It's a great shout for a coffee or for lunch.” As for takeaway, “We have loads of takeaways, and a fab new Sanuk Thai.”

Deirdre Kane is a Bank of Ireland manager based in Dublin north and is the local mortgage specialist for Rush. “It has a real rural feel,” she says. “Rush has huge areas of market gardening on one side and two beautiful quiet beaches on the other, providing it with the best of both worlds.” For a lot of mortgage seekers, Rush's connectivity will be a big draw. “It has easy access to the M1 and a mainline train station with plenty of car parking just outside the town, making it ideal for commuters,” says Kane.

If you’re interested in buying in Rush, contact Deirdre Kane at Deirdre.Kane@boi.com or on 087 233 3685, or visit bankofireland.com/mortgages

The lender is Bank of Ireland Mortgages. Lending criteria and terms and conditions apply. Over 18s only. Mortgage approval is subject to assessment of suitability and affordability. A typical mortgage to buy your home of €100,000 over 20 years with 240 monthly instalments costs €615.79 per month at 4.2% variable (Annual Percentage Rate of Charge (APRC) 4.3%). APRC includes €150 valuation fee and mortgage charge of €175 paid to the Property Registration Authority. The total amount you pay is €148,114.60. We require property and life insurance. You mortgage your home to secure the loan. Maximum loan is generally 3.5 times gross annual income and 80% of the property value (90% of the property value for first-time buyers). A 1% interest rate rise would increase monthly repayments by €54.02 per month. The cost of your monthly repayments may increase – if you do not keep up your repayments you may lose your home.

WARNING: If you do not keep up your repayments you may lose your home.

WARNING: If you do not meet the repayments on your loan, your account will go into arrears. This may affect your credit rating, which may limit your ability to access credit in the future.

Firhouse Dublin 24 provides mature housing and access to the mountains