Branding one of Ireland’s rugby giants for a day

Sponsor for a Day competition gives SMEs the opportunity to sponsor the Leinster, or Munster, rugby jersey for a Champions Cup match 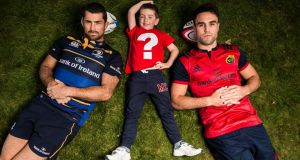 Slipping on a Leinster or Munster jersey, and running out onto the turf at the RDS or Thomond Park, is the dream for rugby players across the country; it becomes a reality for a small percentage of those dreamers. For a business, attempting to boost brand awareness, in the hope of turning that into sales, the dream is to have their company name emblazoned across the front of either province’s jersey. Thanks to the Bank of Ireland Sponsor for a Day campaign, that dream is now a reality.

The competition offers businesses the opportunity to see their brand logo proudly displayed on one of the province’s jerseys in a Champions Cup match this season.

The competition has been running since 2014, with Bank of Ireland providing six companies thus far with the chance to team up with Leinster and Munster - five-time European champions between them.

As well as the unique opportunity of taking their place on a pro-rugby side’s jersey, the deal also includes pitch signage; corporate hospitality for ten guests at the game in question; a match programme advert; photographs with the team; and promotion from Bank of Ireland, Munster and Leinster Rugby through press and media for all shortlisted companies and winners. In a world saturated with marketing and advertising, the competition is stand alone in the breadth of coverage it offers.

The process of the competition sees five finalists shortlisted to sponsor Leinster, and the same number to sponsor Munster, on November 4. A public vote then decides the two overall winners, which are announced on December 6.

To enter, companies must first choose between sponsoring one of the two teams, and then explain in 200 words why their company is the right fit for their chosen team.

However, Bank of Ireland are not looking for a standard love letter to the club as their entry; instead they want companies to describe why they would most benefit from the opportunity. They are also keen to see that the company has an ecommerce capability that will benefit from winning, explained Bank of Ireland Partnerships Marketing Manager, Ian Murray; “what we look for in that tiebreaker is that this business would appreciate the commercial opportunity in terms of a scale that would be beyond them normally because they just don’t have the resources.”

“If they write that they, ‘support Leinster or Munster since year dot and go to every match’, that’s not the strongest entry. If they write and tell us about the exposure that it will give them they are definitely in the mix.”

“The other thing is we do our homework on these companies and we look at what their presence is like. Have they a digital presence? Have they a social media presence? We look at what companies can make the most of the exposure of being on the shortlist and the value in that,” said Murray.

“If their website and company can show an appreciation of branding and marketing, and ecommerce visibility, that will certainly help get them on the shortlist.”

Last season, Acutrace, a company specialising in energy measurement and light control systems in commercial and industrial buildings, won the coveted spot on the Leinster jersey.

Aidan McDonnell, Acutrace’s Managing Director, was the person behind their success and built their entry around the slogan: because energy is our game. From the 12,500-plus entries, McDonnell felt that a tie-in between his company and what Bank of Ireland were looking for was central to their campaign.

“We’re in the clean technology sector. From what we do, helping businesses save energy, through our own software that we develop, I feel we were in the right space from a technical point of view. And it was a good business fit for them,” said McDonnell. “Also when canvassing after being shortlisted, we threw everything at it.”

In terms of the knock-on effects of the branding campaign, McDonnell revealed that the exposure has transformed the company’s profile both in Ireland and beyond.

“Being associated with two of the biggest brands in Ireland - both Bank of Ireland and Leinster Rugby - has definitely helped our profile,” said McDonnell. “It raised our profile dramatically and immediately. We go to meetings and presentations and we just have to show a screenshot of the Leinster Rugby jersey with our name on it and people remember it, even people we didn’t deal with at the time. It stuck in the minds of the public and raised our profile nationally and internationally. When we have a presentation in London, and we display a photo of Sean O’Brien in a Leinster jersey with Acutrace on it - it’s a real icebreaker.”

Companies can enter the Bank of Ireland Sponsor for a Day competition online at: www.bankofireland.com/sponsorforaday