When considering the purchase of a second-hand home, bring along a general builder, seasoned carpenter or professional snagger, to assess the property. 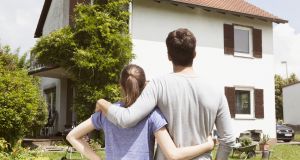 When considering the purchase of a second-hand home, bring along a general builder, seasoned carpenter or professional snagger, to assess the property. Photograph: Getty Images

House-hunting in the second-hand market can often feel like a game of Russian roulette: should you walk away from that musty 1950s semi-D with cracked windows and wonky floorboards, as bringing it up to scratch may stretch your budget and patience too far? Or could it be a diamond in the rough that will polish up beautifully and soar in value with some double-glazing and an interior make-over?

To help make a more calculated decision, it pays to seek advice from a builder or a trusted tradesperson who can tell the difference between a home with fixable problems and one that’s simply a money pit.

Ted Laverty, MD of OnlineTradesmen.ie, suggests that if you spot a property with potential, but are unsure as to what volume of work it may need, “bring a general builder, a seasoned carpenter or what we call a professional snagger, along with you early in the viewing stage (a building/chartered surveyor tends to come towards the end of the buying process).

“They will quickly shed light on potential work needed, from replumbing, rewiring, and reroofing, to design and aesthetic considerations such as replacing windows and doors, sanding floors, insulating inside or out, and redecorating. They’ll also be able to give ballpark figures for the cost of each part of the project, advise the jobs that would need to be prioritised and what can be put on the long finger, which is a real eye-opener for many house hunters. I find they’re also full of ideas, budget tips and sourcing hacks picked up from similar projects they’ve worked on too.”

The most important thing a tradesperson will look out for, in Laverty’s view, is subsidence, as it’s one of the hardest problems to remedy. “You’d assume old houses are the main culprits for this, but some Irish homes built in the past 20 years have structural issues too.” Subsidence red flags include sloping ceilings, crooked coving, and cracked internal walls, especially around joints and bouncy floors. “A seasoned builder should be able to spot it straight off and can advise a course of action, or if it’s wiser to walk away before the ground swallows up all of your wages for the next decade,” says Laverty.

Services should be scrutinised next. Justin McCarthy, MD of electrical firm Independent Light, advises house hunters to head straight for the fuse box, “which can tell you a lot about the state of a house in general and not just the electrics. Houses built up to the 1970s tended to have DZ fuse boards with screw out fuses. If you encounter one of these (rather than one with lots of little flip switches), it means nothing electrical has been modernised. At a minimum, you will need to upgrade to a MCB box, but typically a full rewire will be required to meet safety standards.”

At a guesstimate, McCarthy suggests that €5,000 should cover this job but points out, if you’re doing a full rewire, “most homeowners then take the opportunity to reassess their entire electrical situation and put in more efficient and stylish lighting, more power point outlets, heating controls, data points and often underfloor heating too.”

When examining the plumbing, Eoin Kenny, of Lynch EK Property Maintenance, says check out the boiler first. “Whether gas or oil, if it’s over 20 years old, it will probably need to be replaced with a modern condensing unit, which will set you back around €1,800. Lead pipes were commonly used in Irish construction (pre 1980s), and they too may need to be updated to copper or plastic piping, which could add another €4,000 – based on an average four-bedroom house – to the tally,” says Kenny.

Radiators and heating systems can often be given a new lease of life with a powerful flush of the radiators to remove any sludge, and any small cracks in pipes can be fixed by adding a compound mixture to the heating system, according to Kenny.

While at the plumbing stage, it’s wise to discuss your bathroom wish list and perhaps ask if it’s possible to add an under stairs loo (the waste pipe will be the big determining factor here), an en suite to a bedroom, or possibly under-floor heating.

“In most renovations, we are typically pulling out the baths from the main bathroom, and re-tanking the room, and installing a big walk-in shower instead. €4,000 should get you a decent new bathroom, including tiles, a walk-in shower, sanitary ware, all labour and if underfloor heating is too much of a stretch, we can install electric mats that cost just €300 under the tiles, to give that nice warmth underfoot feeling,” says Kenny.

Insulation is the next big factor to consider, and the condition of the windows and doors. Architect Dermot Bannon advises: “If the house is like a leaky bucket with drafts, I always advise to approach insulation in this order of priority. Sort out the roof and attic first, as heat rises. Often some new flashing and a few replacement roof tiles and lots of lagging in the attic is a budget-friendly fix.

“Next, look at the walls, both outside and in. Wrapping the exterior with insulating cladding can be a great way to re-render the house, as well as make it warmer. There are also lots of insulating options for internal walls, there’s even insulating paint nowadays. Windows and doors should be last on the insulating priority list, not first, which is a common misconception,” says Bannon.

Colm O’Toole, director of Carroll Joinery, finds today’s customers are driven as much by the aesthetic values new windows and doors add to an old house, as much as the thermos efficiency. If you are considering new glazing, O’Toole warns against replacing the glass only.

“If the glass is old the frame is old, and there’s no real benefit in replacing just one element. Likewise, replacing a few windows at a time, or the hall door a few years later, is a false economy as you then end up paying multiple delivery costs, set up costs, labour costs and it costs a lot more doing it in phases. So, I’d advise waiting till you can afford to do the lot in one go. ”

The average job we do on a standard four-bed house, with 20 square meters of windows, runs between €12,000-€15,000. This will get you decent double-glazed windows, with warrantied wood composite frames, a new hall door and a big slider window door for the room backing on to the garden. You could cut that figure in half if you chose PVC frames, but PVC corrodes and degrades over time,” says O’Toole.

Once these big renovation undertakings are in hand then it’s time to look at the potential of the floor plan as it stands.

Can rooms be repurposed, or partition walls be broken through to create an open-plan living space? Are there decent floorboards that can be easily restored with a sanding? What old features could you create an interior scheme around?

Over the coming weeks we will be delving into more potential interior and exterior building and design projects, that can help transform and upgrade a second-hand property, without any need for adding an extension.

For information about Bank of Ireland mortgages, visit bankofireland.com/homes