Crafting a classic by hand: the Lowden Bushmills guitar project 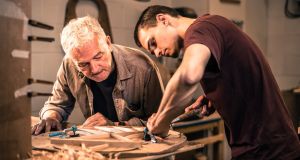 He’s the expert guitar maker whose lovingly-crafted instruments have been played by Eric Clapton and Ed Sheeran, but George Lowden’s first creation was slightly less sophisticated. In the summer of 1961, the then 10-year-old and his friend devised two makeshift guitars with nails for frets, fishing line for strings and a square sound box.

“It probably didn’t sound very good but we thought we were great, prancing round the garden,” recalls Lowden, now 65. “It was just a toy guitar, but it meant a lot to me.”

This fascination with guitars continued into adulthood, and in his early 20s, armed with some basic tools, wood and a booklet on the subject, Lowden set about trying to make them professionally.

“When I told my dad that I was thinking of making guitars, the only thing he said to me was, ‘Well, make sure they’re good ones’. We want to try and do something really well, and that’s what it’s all about.”

There’s a big difference between a handmade guitar – which takes Lowden around six weeks to create – and a mass-produced model, he says.

“The richness of the sound, the responsiveness of the tone, the fact that the tone is not harsh or cold . . . It’s a bit like the difference between the average piano in a household and a Steinway grand.”

After a few years honing his craft, Lowden experienced his first rush of sales when a friend studying in France took one of his guitars to a store in Paris. Impressed, the retailer placed a monthly order, allowing Lowden to open his first workshop in his native Bangor, County Down.

While the likes of Sheeran and Snow Patrol’s Gary Lightbody have performed using Lowden guitars in recent years, it was difficult to attract the attention of big name acts back then. The ever changing economic and political landscape had a big impact. “A lot of famous musicians were not coming through Northern Ireland, so it was hard at the beginning. For the first 15 years, I was better known in France and Switzerland than I was here,” says Lowden.

“After that, a lot of people started to hear about the guitars and it kind of just developed.”

I always had a sense that this was what I should be doing. I had the determination to stick at it.

Listening to a gifted musician, well-known or not, play one of his instruments is still “a big thrill” says Lowden, whose three sons have followed him into the business.

“I was never very good as a guitar player, but I’ve had the privilege of hearing a lot of really good ones coming through the workshops. Listening to them makes me realise that I could only fiddle about really.”

Turning a painstaking craft into a successful business isn’t easy, however, and Lowden has experienced his fair share of challenges, from changing retail demand to receivership in the late 1980s.

Even at the toughest moments, he kept going. “I always had a sense that this was what I should be doing. I had the determination to stick at it.”

Today, Lowden Guitars is a classic, globally-recognised brand, with a team of around 30 at its Downpatrick-based workshops (“I don’t like the term factory,” says Lowden) and a waiting list of three to four years for a model built by the man himself.

After more than four decades, Lowden still has a passion for innovation. His latest project is a collaboration with Bushmills Irish Whiskey, on a new limited range of guitars made of ancient bog oak and carefully selected barrel wood from The Old Bushmills Distillery.

“Bog oak is an oak tree that’s been lying buried in the bog for usually around 5,000 years. When they lift them out, the wood you get is almost petrified; it’s harder and a bit lighter when it dries out, and it makes great tone wood,” Lowden explains.

“Then we’ve used some of the staves – the individual pieces that make up the barrel – from the Bushmills barrels for some of the other parts on the guitar. They smell great; there’s still a wee hint of that whiskey smell by the time we finish.”

The Lowden legacy is set to continue with the help of the founder’s 25-year-old son Aaron, who left school a decade ago to begin an apprenticeship to his father.

“He’s determined to take on the guitar-making side of the business after I’ve hung up my boots – which will probably never happen,” Lowden says with a laugh.

“It’s very important for me to pass on not only the skills side of it, but the ability to use tools to the level we have to, the design ethos and the ability to create new designs.” He adds: “I’ve never copied other people and I think that’s important: to paddle your own canoe, for better or worse.”

Only eight Bushmills x Lowden F-50 guitars are available to buy direct from the Lowden Guitar workshop. To find out more visit www.lowdenguitars.com/bushmillsxlowden