From wine to art to food, these two great European cities have become incredible food and culture destinations all year long 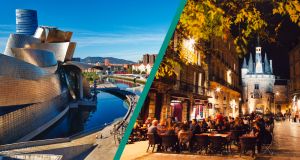 From food and drink to culture and architecture, Bilbao and Bordeaux offer visitors a year-round travel experience, according to locals.

One of the best things about visiting a European city is getting to experience their culture, music, food and wine just like locals do. Two cities that are blending the best of their traditions with a fresh, cosmopolitan edge are Bilbao, in northern Spain’s Basque region and Bordeaux, a wine lover’s haven in France.

In the elegant Bordeaux, you will find one of the world’s most exciting restaurant scenes. One of the most beautiful cities in Europe, the exceptional wine they are famous for does not disappoint and you can enjoy lots of great food and wine experiences throughout Bordeaux and neighbouring regions.

Olivier Crombez is from Paris, France but has been living in Bordeaux since 2012. He is the project and events manager at "Union des Grands Crus de Bordeaux."

When people ask me what brought me to Bordeaux, I say ‘the wine, of course’. I was offered a role as the events manager of the Grands Crus de Bordeaux, so I have been here for six years. I am in charge of organising the events of some of the biggest châteaux here in Bordeaux and abroad.

Bordeaux has great wine, lovely architecture, a huge number of great restaurants and wine bars, a river running through the middle of the city centre and on top of all that a very chilled and relaxed atmosphere. It is Unesco classified with lovely buildings, streets and squares.

In the last 15 years or so there has been a lot of hype around Bordeaux, and its region, and lots of Parisians have moved into the area and enjoy the Bordelais way of life.

It has also become a very popular holiday destination. While the city is booming, it has kept its original architecture. What makes Bordeaux special is its geographic location as it is close to the coast, the mountains, to Spain and the nice countryside of Perigord and Dordogne.

I would recommend a visit to the new Cité du Vin, which has lots of things to learn and experience around wine. One of my favourite places to go for drinks is on the terrasse of the bar Chez Fred, followed by dinner at Mampuku. Anyone visiting Bordeaux should visit the superb restaurants.

I love the tapas at La Maison du Pata Negra in the middle of the market at the Marché des Capucins. For some really nice biodynamic wines and lovely finger food go to Le Flacon, a great wine bar. If you are a wine lover, I would highly recommend hiring a car to drive around the neighbouring wine regions like Saint Emilion, Pomerol, Pessac Léognan, Margaux and Pauillac.

"Où est Grafton Street?"
If you're missing home and in need of some retail therapy, get down to Rue Sainte-Catherine, the longest pedestrianised shopping street in Europe. From international high-street brands to local designer talent, this busy street is worth a stroll while warming up on a takeaway coffee or hot chocolate.

L'histoire buffs
The Cathédrale Saint-André de Bordeaux, more commonly known as Bordeaux Cathedral, is an exquisite example of medieval gothic architecture. This Roman Catholic church is currently the seat of the Archbishop of Bordeaux, boasting beautiful interiors with an imposing exterior. If you remember your French history, Eleanor of Aquitaine and Louis VII, the future king of France, were married here in 1137.

Avant-garde
If you want to balance the old with the new, the CAPC Museum of Contemporary Art is a great resource for brushing up on local artists. Its programme of temporary and permanent exhibitions and events across music, architecture, literature, theatre and performance, positions it as one of the leading lights of contemporary French visual arts.

[Aer Lingus flies to Bordeaux up to four times weekly. Book now and look forward to a happy winter]

In the 21 years since the world-renowned Guggenheim museum (pictured, above right) opened in Bilbao, the city has transformed from a place struggling from decline in industrialisation into a prospering, exciting and sophisticated city that is a must for design and architecture lovers. Its proximity to the coast means you will see lots of incredible fresh fish dishes on the menu, and take a stroll through the old town for some of the best pintxos you will ever have.

For David Kitching origanlly from Mayo, living in Bilbao was a great experience and he returns often.

It's a really gorgeous place, he says. It is full of music, art, great places to eat and drink and has a rare mix of art and architecture. For me, it is more personal (why I would recommend Bilbao), as I spent a very happy year living there and met some really nice people.

The lifestyle is really fun and it’s a really nice city to socialise in. It is an old industrial city, similar to Glasgow or Liverpool. The Guggenheim really is as good as people say. The architecture is incredible, I have never seen anywhere like it.

For amazing views of the city take the Artxanda Funicular, a cable railway, to Mount Artxanda. If you like gigs, Bilbao has some brilliant live music venues. There is a place called Kafe Antokia which I used to go to for lots of gigs.

One of my good friends, a local guy called Manu, has a bar called Residence Cafe. He loves all sorts of music and actually puts on an Irish trad session every Wednesday night, and every weekend he has something different. It is a very special place, with a lovely atmosphere and great drinks too. The food is excellent in Bilbao, it is really high-quality.

I would advise anyone visiting to take a walk around the old town (El Casco Viejo), where you can see all the old pintxo bars. I had a local favourite beside my old flat called Bar Santutxu. No frills and pretty simple, but I loved their tortilla de patata.

There is something particularly special about the old town for me. You can just wander from one pintxo bar to another trying different pintxos and having local wine or beer. Bilbao is near the coast so the locals are really into their fish. They love cod and the local way of preparing it is called Bacalao al pil pil. They have a local, dry white wine called Txakoli which has a slightly green tint to it. It goes really well with fish.

I also love Kasko, a great restaurant that is also in the old town. For late night spots, go to the San Francisco area and try Bullitt Groove Club or there are plenty of other cool places nearby. If you get a chance, go to a match at San Mamés Stadium (pictured, above left). One of the highlights of my time there was a match between Athletic Bilbao and Real Madrid. It was like going to an old firm game, really intense and an incredible atmosphere.

Because it is so close to the coast you can go surfing on the outskirts of the city. You can get a Metro from near the Guggenheim and in 40 minutes you are at a beach. I loved going out to surf when I had a spare afternoon when I lived there. If you are going for a weekend, I would definitely check out what is on as they have great local music and arts festivals that are often held in the public parks.

Very fine art
If the Guggenheim isn't your thing there's still plenty of heavyweight art museums to choose from in Bilbao. The Fine Arts Museum boasts works by baroque and Renaissance masters, including Goya’s portait of Martín Zapater and Bacon.

New threads
Flip from fine art to fashion by checking out the local boutiques, independent designers and high-street shops in the upscale El Ensanche neighbourhood. For more on the area, visit the extremely helpful bilbaoturismo.net.

The cultural quarter
Declared a cultural space by the Basque Government in the 90s, Azkuna Zentroa is now a multi-purpose arts and entertainment space for locals and visitors. If you're in the mood for some food, drink, music, theatre, film or shopping, this beautifully renovated old corn exchange is worth a few hours of your break.

Suspend your disbelief
The only Bilbao structure on the Unesco World Heritage List, the Puente de Vizcaya is a transporter bridge linking the towns of Portugalete and Getxo, on either side of the Nervión River. This impressive feat of engineering (pictured above) is considered the perfect combination of functionality and beauty. Its gondola can transport passengers across the river in 90 seconds but, if you want to linger a little longer, it's possible to stroll across the platform of the bridge and drink in the stunning scenery for longer.

It's knot for everyone
As mentioned above, the River Nervión (Ría de Bilbao) splits the city in two, so it is possible to view loads of Bilbao’s major attractions by boat - day or night. You can take a romantic boat tour or tackle something a bit more energetic like kayaking or stand-up paddle boarding.

[Aer Lingus flies to Bilbao up to five times weekly. Book now and look forward to a happy winter]