The Atlantic is, of course, the star, but the route has other world-class attractions 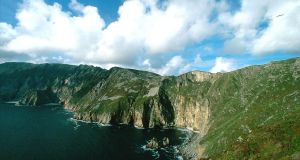 Bunglass, the cliff face at Sliabh League, Co Donegal, which reaches up almost 2,000ft out of the Atlantic. Photograph: Nutan/Tourism Ireland

The 2,500km Wild Atlantic Way stretches across nine coastal counties, from Donegal to Cork, and offers all sorts of highs, from the sea cliffs at Sliabh League in Donegal, which reach up almost 2,000ft out of the ocean, to the country’s highest, Carrauntoohil, in Kerry, which tops out at 3,406ft, to be precise.

The WAW boasts a Unesco World Heritage site along the way – the now truly world famous Skellig Islands, as seen at a cinema near you. Makers of the Star Wars franchise know it for the main attraction it is, having made parts of The Force Awakens and The Last Jedi on Skellig Michael.

Star Wars isn’t the only time Hollywood has come knocking. Long before the force was with it, we had John Wayne and Maureen O’Hara in The Quiet Man. It was shot on locations around Mayo and Galway, where there are two replicas of the little cottage that played a starring role in the movie – at Cong in Mayo and Maam Cross in Galway.

Kerry takes the Oscar when it comes to stars however, given that it is home to the only Gold Tiered Dark Sky Reserve in the northern hemisphere, an accolade given to it by the International Dark Sky Association. The lack of artificial lights gives the firmament top billing.

Of course the real star of the Wild Atlantic Way is the Atlantic. All along the route there are opportunities to swim in it, sail on it and walk beside it. And when you’re looking out over it at the Cliffs of Moher, spare a thought for local lad John Philip Holland, who was born in 1842. He invented the submarine.