Exploring one spot or road-tripping the Way, these hotels offer the best in Irish hospitality 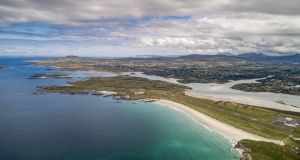 The success of the Wild Atlantic Way is not just that it has attracted tourists from overseas but that it has reacquainted so many locals with a region that, before Fáilte Ireland’s genius rebranding, was at risk of being taken for granted.

Now we see it with the fresh eyes of a tourist, up there with the likes of the US’s Pacific Coast Highway and South Africa’s Garden Route as a serious bucket list road-trip destination, right in our own backyard.

What’s more, it’s the perfect excuse to enjoy some of the top-notch hotels dotted along the way. Exemplars of Irish hospitality, they are perfect places to stay and explore one section of the route in depth, or to rest your head along the way.

Starting south, one of the most historic properties to visit is the Eccles Hotel in Glengariff. There has been a hostelry on the same west Cork site since 1745 and the property is Ireland’s oldest purpose-built hotel. In a stunning location like this – on the Beara Peninsula – it’s easy to see why.

This is a particularly big year for the property as a €1 million refurbishment programme will be completed in April. They are upgrading bedrooms, adding new treatment rooms to the spa, and installing new outdoor Jacuzzis and a sauna.

Heading north, the historic coastal town of Clifden is home to the famously family-friendly Clifden Station House Hotel. It has a variety of accommodation options, including suites and family rooms. There are also four-star two- or three-bedroom apartments, which give you the option to cook if you feel like it and dine in the restaurant if you don’t.

It’s particularly good value for extended stays but given that kids under 12 stay free for B&B in the hotel – when sharing with adults – whatever option you choose, the Clifden Station House Hotel is a holiday for your pocket. There are loads of things to do too, with a swimming pool, kids’ club and in-house theatre.

Mayo has done a great job establishing itself as the country’s outdoor adventure HQ. It has some of the country’s best-loved hotels too.

These include the Breaffy House Resort in Castlebar, another great option for kids, as there is a swimming pool, kids’ club in summer, playgrounds, astro pitch, orienteering, forest walks and a fairy village, all within an easy drive of Croagh Patrick, the Great Western Greenway and Westport.

The Mulranny Park Hotel is set in a beautiful woodland estate overlooking Clew Bay and Mulranny’s Blue Flag beach. Here too there are hotel room and apartment options, with swimming pool and outdoor hot tub.

Imagine all the people who’d like to stay in its John Lennon Suite, named in honour of the musician who stayed here with his wife Yoko Ono in the summer of 1968, performing the as-yet unreleased Revolution for locals and guests.

Mount Falcon Estate in Ballina has both swish bedrooms and luxurious self-catering lodges. For upmarket self catering, choose between its courtyard, lakeside or woodlands lodges, which each sleep up to six people. It’s another great option for families, with loads of activities to be shared and enjoyed including archery, bike hire and hawk walking. While grown ups will love the golf, clay-pigeon shooting and award-winning spa.

As a location it’s a great mid-way point to base yourself along the WAW, being an hour and a half to Galway and Sligo, and also handy for golf courses at Enniscrone, Carne and Rosses Point. Mount Falcon’s food offering is pretty special too, with a kitchen headed up by Tom Doyle, formerly of l’Ecrivain.

There’s more grown-up luxury on offer at the nearby Ice House Hotel, situated on the Quay in Ballina. It looks out on to the River Moy estuary and has a fabulous spa, called Chill, plush modern bedrooms and a terrific restaurant.

Further north, stay at the Sligo Park Hotel and Leisure Club just outside Sligo town and the perfect place to explore the ancient sites, woodland retreats and rolling waves of the county – from hiking Knocknarea to surfing Strandhill.

Those with little ones will appreciate that the hotel has a dedicated fairy trail, plus fun and games in the pool, a kids’ club and movie nights.

Finally, don’t miss the homes of Donegal, or rather, the hotels. Start – or finish – your WAW road trip with a stay at the Abbey Hotel in Donegal Town, offering easy access to Slieve League – one of Europe’s highest sea cliffs – the bustling fishing port of Killybegs, and the Folk Village at Glencolmcille.

If you fancy flying in for your WAW driving tour, there’s Donegal Airport, which, with its stunning coastal setting, has been voted the world’s most scenic airport two years in a row. Opt for a hire car and the airport offers the perfect way to start or finish your Wild Atlantic adventure.