Everything you need to know about this stunning stretch of coastline 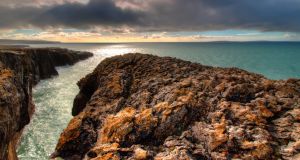 The Burren in Co Clare.

In the late Seamus Heaney’s poem Postscript, he beseeches the reader to take the time to drive out west to Co Clare’s Flaggy Shore where the Atlantic Ocean’s beauty and power “catch the heart off guard and blow it open”. This glorious description captures perfectly the feeling of experiencing the Atlantic, with its buffeting waves, soaring cliffs and picturesque coastline. Since it was officially launched in 2014, the Wild Atlantic Way has become an increasingly popular way to experience this exceptional coastline, and summer is one of the most special times of the year to visit.

This 2,500km-long defined coastal touring route is the longest of its kind in the world, starting at Donegal’s Inishowen Peninsula and meandering through nine counties to Kinsale in Co Cork. A visit will leave you refreshed, in love with the Irish countryside and the natural, breathtaking seascapes and landscapes on our Atlantic doorstep.

Robert Coyne of Mayo County Council’s Tourism Section says many people are attracted to the route because they can create their own itinerary, staying longer in one place if they like it, and make their own adventure.

“It is an amazing idea [the Wild Atlantic Way]. Having an outline route to go through and then to actually select an area to explore. There is safety in knowing where you are going, but also a freedom in how long you stay there and maybe even [finding] hidden gems along the Wild Atlantic,” he says.

One of the best ways to experience this special route is to take part in a local experience. Be it a tour with a local guide, a visit to a local heritage centre or an experience unique to that area. The awesomeness of the mountains, the powerful sea and glorious beaches, woodlands and wildlife will allow you to exhale and forget everything while you are there. Then of course, there is the culture, language, music and the people, which all add to the experience.

If you love the thrill of motorbikes, try True North Bike Tours, where your motorbike will follow some lesser-known routes through Donegal’s glens and mountains and travel along spectacular coastlines, cliffs and beaches. Your tour can be guided or self-guided, with everything arranged, including bed and breakfast stays. While in Donegal, visit the Slieve League cliffs, which are some of the highest in Europe at 600m. Five minutes from there is Donegal’s only distillery, Sliabh Liag Distillery. Its An Dúlamán Gin Palace is a family-owned craft distillery making a unique Irish Maritime Gin in a handmade copper pot still using locally for foraged seaweed.

For those who love William Butler Yeats, you can immerse yourself in the nature and locality that inspired him with a meal at Broc House in Carrowroe, Co Sligo. You will dine overlooking the spectacular views of Lough Gill, learn all about Yeats and have a peek at some of the landmarks immortalised in his poems. While in Sligo, Gleniff Horseshoe is a striking six-mile loop of a single-lane road where you will experience unforgettable mountain views and can try the “magic road” where your car will roll “uphill”.

Right at the heart of Ireland’s Wild Atlantic Way, Mayo is filled with iconic, beautiful landmarks like Croagh Patrick, Achill Island and Clew Bay. If you fancy getting off the tourist track, try Terra Firma Tours, whose cultural walking tour will take you through some of the county’s beautiful landscapes and where you will walk on ancient pilgrim paths. For a unique stay, the Irish Landmark Trust has a number of beguiling attractions where you can stay, including lighthouses, lighthouse keepers’ houses and railway cottages.

“The Wild Atlantic Way [attracts people] because it is so wild. You have areas of blanket bog that run into the Atlantic, but you also have the sheer power of the ocean at times over the winter and that is an awesome, powerful thing to witness. In Mayo, we have amazing, clean beaches and there are very pristine beaches right the way along the Wild Atlantic Way,” says Coyne.

In the heart of Galway’s Gaeltacht, try one of Connemara’s Wild Escapes tours, where you will take in some historically significant sites while walking amid the rugged beauty of its landscapes. You will stop at Pádraig Pearse’s Cottage at the Connemara Cultural Centre in Rosmuc and at Derrigimlagh, where the world’s first permanent transatlantic radio station was set up and also where two pilots landed, having flown the first successful non-stop transatlantic flight. Connemara Wild Escapes also offers many more ways to explore Galway’s beautiful coastline, including an Aran Islands safari and horse-riding on the beach.

Anyone who has visited the Burren in Co Clare knows the powerful, otherworldly feeling it inspires. Ensure to stop by Hazel Mountain Chocolate for a delicious lunch in the cafe and take home some of the exquisite chocolate treats. To get some hands-on experience of the Burren’s renowned flora, take a foraging tour with Wild Kitchen, where they will show you how to identify plants, what to avoid, and what is in season, before settling down for a picnic overlooking the Atlantic. If you travel to Doolin, Co Clare, visit the Great Stalactite, the longest free-standing stalactite in Europe, measuring 7m.

In Kerry, Kells Bay Gardens is situated on the Iveragh Peninsula overlooking Dingle Bay. These gardens contain one of the most significant collections of southern-hemisphere plants in Europe. While there, you have the option to try the Skywalk, Ireland’s longest rope-bridge. It spans the Deligeenagh river at a height of about 11m. For star-gazers, visit Skellig Michael (a recent film location for Star Wars) for the Kerry Dark-Sky Reserve where you will have a unique view of the skies. The lack of light pollution there means “you will see the star constellations and planets as they were seen by your ancestors”.

Meet wonderful alpacas at west Cork’s peaceful Waterfall Alpaca Farm near Drimoleague. These South American animals love to make friends with humans and a visit here allows a reviving stroll through the woodlands, fields, rivers and waterfall. For an island visit to remember, take Ireland’s only cable car to the most westerly of Cork’s inhabited islands, Dursey. It runs about 250m above sea level and takes six people at a time (locals get preference) on the 15-minute journey. While in west Cork, make sure to explore the county’s Irish cuisine and visit some of its exceptional food producers.

For those keen to tick off as much of the WAW as possible, challenge yourself to complete your own Wild Atlantic Way passport. There are 15 signature points and 188 discovery points dotted along the route, and each has its own stamp.

The Wild Atlantic Way is something quite extraordinary. As you gaze out west across the ocean knowing the next stop is America, you will understand why Heaney wrote: “You are neither here nor there.”