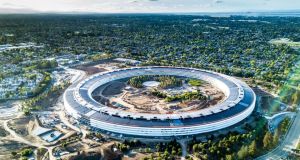 Trinity is the number one university in Europe when it comes to start ups and new businesses developed by students. Aerial photo of Apple new campus building, Cupertino California, USA . Photograph: iStock

Dublin has the potential to become another Silicon Valley, due in no small way to the strength of ideas and talent that is emerging from Trinity College Dublin’s MSc in Entrepreneurship.

That’s according to Dr Giulio Buciuni, director of the MSc in Entrepreneurship in TCD, who steered the masters from concept to launch just two years ago.

In fact Trinity is the number one university in Europe when it comes to start ups and new businesses developed by students, ahead of Cambridge and Oxford, Buciuni says.

“In fairness, this is extraordinary, due mostly to the performance of our computer science department – a great department that has a group of students that delivers new technology solutions every year. We thought it would be appropriate to plug in to this environment a dedicated Masters in Entrepreneurship, whereby we could provide Trinity but also non-Trinity students with a sound methodology of how to start and grow a new business.

“On top of that we are recognising Dublin is changing a lot, through foreign direct investment but what we think is still missing in Dublin is an entrepreneurial eco-system, like the one you would find in Silicon Valley. This type of ecosystem doesn’t fall from the sky, it needs to be grown from the bottom up. Institutions play a role in paving the way for that, with the creation of successful start-ups,” he says.

“Within the school we have created clinics, and each student has a mentor. They give ideas of how to raise money; you need seed capital to help new businesses to scale and grow,” he adds.

The Trinity Entrepreneurial Society is the largest society dedicated to Entrepreneurship in Trinity college (but not the only one) and they also connect students to stakeholders as well as trying to promote initiatives and Buciuni sees this as being complimentary to the programme.

Young people should be encouraged greatly to become successful business owners, and not just employees themselves

With the Masters, they endeavour to create a hub where they connect new companies to investment funds, as well as successful entrepreneurs in Ireland, in an attempt to create a micro eco-system within the school. There the students get access to the resources needed, be it money or knowledge from stakeholders in the city.

One such person is entrepreneur in residence, Oliver Tattan, former chief executive officer of VHI and EY entrepreneur of the year.

He says young people should be encouraged greatly to become successful business owners, and not just employees themselves.

“Young people shouldn’t expect to come out of their education and look around to industry or government, they should be encouraged not only to create a job for themselves but for other people, in order to contribute to the community in that way,” he says.

Some people think that entrepreneurs are born and that it can’t be taught, but Tattan disagrees with that.

“I did all the entrepreneurship modules that were available in my MBA, more than 20 years ago, and I look back on them and think that they helped me an awful lot. I’m very keen on entrepreneurship. I take a pragmatic approach, I’ve set up quite a few businesses, been through the cycle of: how do you think up ideas, how do you start, how do you pitch ideas to investors, how do you grow and eventually sell your business. I can speak to young people who haven’t seen the practicalities of what it really means to be in business for themselves. I wish somebody had taught me a lot of these things 25 years ago,” he says.

Tattan approached TCD more than five years ago with a view to teaching at the university and has been working with them ever since.

“I have learned a few things over the course of my career and these are things I’d like to share back with young people. I do some work on the undergraduate degree and the masters. I like teaching and giving something back to the community,” he says.

The start-up landscape is fantastic not only in Ireland but worldwide; young people are interested in it more than ever before

Tattan teaches on the programme as well as making himself available in a clinic setting for students to be able to run their ideas by him.

“I’ll say to them, you’re missing a strategic trick on this one, or that’s not going to work. I’ve seen so many industries so I’m well placed. We’ll discuss the right type of investor for a business, so if it gets to a point where the idea is ready to be spun out, we can do capital introductions. We bring in other entrepreneurs, and we try to compliment the panel with all the things you’d look for in terms of diversity, gender and experience,” he says.

In terms of Trinity success stories, Tattan says there have been many. Buciuni cites one particular student, whose business model sees her train immigrants to become baristas. Many have found full-time work on completion of the course.

“She is already making money from this but it is also having a positive impact on the local community,” he says.

In terms of the start-up landscape in general, Tattan says it is very fertile. “The start-up landscape is fantastic not only in Ireland but worldwide; young people are interested in it more than ever before. A majority of young people now have the ambition that at some stage in their career they might set up a company, or become independent in some way. They can create employment or become wealthy themselves and there is so much scope in an entrepreneurial career. ”