How charities work hard helping us to keep on giving 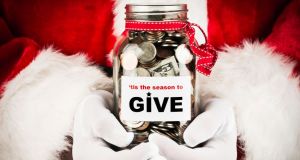 Total fundraised income among charities and the not-for-profit sector grew 3 per cent last year. Much of this is attributable to what consultancy firm 2into3 says was a “staggering” rise in corporate donations. These were up 40 per cent, driven largely by corporate and social responsibility (CSR) activities.

Within that good news story, however, is a curate’s egg. While the social services subsector saw the greatest individual rise in fundraised income, up 19 per cent, international organisations saw a 12 per cent decrease.

In the main, the sector looks to have recovered well from the charity scandals surrounding Console and Rehab in 2014 and 2016, a period when public trust in charities was feared broken. The establishment of the Charities Regulator in 2014, and much greater focus on governance and transparency, has helped restore it.

There are some positive indicators for the future, too, according to The Wheel, the national association of community, voluntary and charitable organisations.

The sector employs 190,000 people and manages €15 billion for public benefit every year, it says. More than half of this is generated by charities themselves towards the cost of their work, including over €750 million fundraised from the public.

Indecon Economic Consultants, in a report published by the Charities Regulator in 2018, estimates that total direct, indirect and induced value of the work of Ireland’s charities exceeds €24 billion per annum and supports 289,000 employees.

Yet the sector was hit hard during the period from 2008 to 2018, with many organisations experiencing income declines of up to 50 per cent , according to The Wheel, which says more than half of its 1,700 members have not experienced any uplift in their income since.

Part of the perennial challenge facing charities is that effective fundraising isn’t only about amounts but about consistent giving. While Irish people have traditionally responded generously to emergency appeals, and are good at ad hoc giving, charities need sustainable finance models.

It’s why you’re much more likely to be met with a “chugger” brandishing a pen and a direct debit form than a bucket.

“Direct debits are the lifeblood of Barnardos. It means we can plan for the future because we know there will be money coming in next month,” says Mary Gamble, director of fundraising at Barnardos Ireland. The organisation worked with nearly 18,000 children last year, on over 40 projects across the country, each of which has a waiting list.

Despite the value of direct debits to the organisation, like many charities it doesn’t recruit donors on the street anymore. “People don’t like to stop. It’s also hard to get volunteers to do it. Instead we take stands at shopping centres, so that people can choose to come over if they want to, and volunteers don’t have to stand out in the rain,” she says.

The scandals of a few years ago were very damaging. It’s why we put so much effort into reporting and transparency

Christmas is a crucial time. “A lot of charities’ activity is weighted towards this time of year and a lot of charities’ income comes from it. If you’re are at home at Christmas, with food on the table and presents for your kids, and the house warm, if people have enough, in other words, they like to think about those that don’t.”

Social media platforms have provided new ways to raise funds, including donate buttons on Facebook, which help. Before people sign up to direct debits, however, charities encourage them to do their own due diligence on their charity partner, so that they can feel confident about their giving.

“The scandals of a few years ago were very damaging across the sector. It’s why we put so much effort into reporting and transparency. We’re lucky at Barnardos Ireland in that donors are very loyal, which helped, but as a charity you have to keep communicating with them. Fundraising isn’t just about money, it’s about building relationships with supporters,” says Gamble.

All that additional hand-holding soaks up resources, however, which may be why the cost of fundraising has gone up. To raise a single euro cost 29 cent in 2018, up from 25 cent in 2017, according to 2into3.

Some of it may also be attributable to the advent of new data privacy rules. Many charities have had to cull the mailing lists they rely on for appeals, and run local and community events in order to build them back up organically.

It’s also just expensive to stand out in a crowded marketplace.

“From a fundraising perspective there is a lot of messaging out there, which means more communications are required to tell the story,” says Amy Carr, head of partnership and philanthropy at Focus Ireland, which works with people who are homeless or at risk of losing their home.

Homelessness is most often referred to in numbers.

“At Focus Ireland we need to keep bringing it back to the fact that behind every one of those numbers is a person or a child,” she says.

“The biggest challenge is getting attention when there are so many good causes out there, both domestic and international, and the fact that people have extremely busy lives,” says Richard Dixon, director of public affairs at Concern.

Charities also have to do so in a way that is “credible and appropriate for everyone from 18 to 80”, he says.

In a tight labour market, charities also have to compete for good staff.

“Attracting and retaining high-quality and experienced people to focus on and find solutions to some of the most pressing problems still facing our world today” is a challenge, says Mary Van Lieshout, deputy CEO of Goal.

“Without the right people, the right talent and funding sustained over a period of time, we cannot sustain our efforts to address root causes, and this fundamentally impacts our ability, as a sector and as a society, to influence and create real change for people.”

The good news is that if any sector can rise above challenges, and find creative solutions, it is this one. As Van Lieshout puts it, “The charity sector is one of the most adaptable and resourceful sectors, that continues to go the extra mile to innovate and forge partnerships to achieve its goals.”