It’s not just that cars will change in the next few years, it’s that our whole idea of how they work will 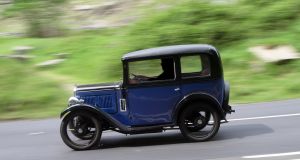 The way in which cars work hasn’t changed that much since 1923. That was the year that Herbert Austin launched the first Austin 7. Image: iStock

The way in which cars work hasn’t changed that much since, oh, about 1923. That was the year Herbert Austin launched the first Austin 7. A small, affordable car, it opened up the market for family motoring on this side of the Atlantic in much the same way the Ford Model T did in America. The 7’s influence has been, arguably, more felt than the T’s though. It was the first mass-production car to have its pedals laid out the way that most of us would these days expect – accelerator on the right, brake in the middle, and clutch on the left. Since then? Just details, really . . .

That’s not going to be the case when the 2020s are looked back upon from the perspective of history. The car, and the way we use it, is going to change very rapidly, and possibly fundamentally, in the next decade. Oh sure, by the time 2030 rolls around there will still be conventional, petrol and diesel-powered, simple and straightforward, cars on the road. The very longevity of a car’s construction, and the sheer expense of replacing them, will ensure that. Surrounding those older models, though, will be something quite different.

Electrification will be the most obvious change at first. It’s already happening, of course. Look at the car sales figures for this year, and you’ll see mostly doom and gloom as the market plummets in the face of Brexit-related uncertainty, but there is a bright spot in the electric vehicles (EV) column. EV sales are up by 194 per cent so far this year, which is a huge climb, even if the overall numbers (2,600 sales so far) are still relatively low.

Who’s leading this charge (’scuse the pun)? Tesla, surely? The Californian car maker, not always in the news for the right reasons, must be the most famous electric car maker in the world right now. That doesn’t mean it’s the best, though (in spite of what some internet commentators would have you believe). If you look at the sales charts, it’s currently Hyundai that dominates. The Leaf, Nissan’s second-generation electric car (which is about to get a boost from a new, bigger-battery, longer-range model), is the best-selling single electric model right now, but Hyundai takes the overall battery top spot because it has two EV models on sale. Tesla languishes back in seventh place in the electric car sales charts.

Much of that is down to price, of course. The cheapest Tesla clocks in at more than €90,000 while the all-electric Hyundai Kona is under €40,000. It’s Hyundai, and its cousin Kia, that could come to dominate the electric car market for the next few years. Already, between the two brands, they have four fully-electric models available – Kona and Ioniq from Hyundai, eNiro and eSoul from Kia. All are impressive to drive, all have decent one-charge ranges (still arguably the defining purchase factor), and all can be had for a relatively reasonable price.

Tesla makes some exciting cars, no question, and its new Model 3 is at least somewhat more affordable, but it could be that the Koreans, having nabbed a head-start on the rest, could be in the pound seats for a while.

A bigger change will come in the way we own and use our cars. Car ownership fell dramatically across the world during the last recession and car makers started to look towards new models to try and help shore up their balance sheets. Car-sharing became a buzzword, and there are significant investments being made in that direction. Toyota already has its Yuko on-street, instant-hire programme up and running in Ireland, while elsewhere, even those great rivals, BMW and Mercedes, are corporately cosying up to one another to share investments in car-sharing and ride-sharing set-ups. The first flickerings of autonomous, robotic cars are also starting to show, although such systems are – probably – much further away from fruition than most people think.

Arguably, though, the biggest change will come in the way cars communicate, not just with us, but with other cars and the world around them. Mark Teevan, strategy, innovation and corporate affairs director at Toyota Ireland, says: “The real benefit of the connected technology is not the technology itself, but what does it enable. What services does it enable you to deliver, and what people from outside the automotive space see possibilities in it? Does the technology allow them to deliver services through our cars? Because that is separate technology to the car itself, that can happen really quickly. The usage model depends on someone finding a business case that provides a way to use an asset, the car, differently. So the connected car and the usage model will develop at a faster pace than, say, the electric car or the autonomous car.”

To do that, we’re going to have to set up communications networks specifically designed for cars. Three Ireland is already hard at work on such systems, and a spokesperson says: “We will do our part to contribute to building an intelligent transport system in Ireland. Through our mobile networks, we will introduce and support dedicated technologies that will answer the needs of connectivity items, whether they are vehicle-to-vehicle, vehicle-to-pedestrian, vehicle to road infrastructure, and vehicle-to-network/cloud. All these connectivity items form the vehicle-to-everything concept. But beyond connectivity, we will also play our part in the enablement of new forms of intelligent traffic management systems that will increase traffic efficiency, reduce overall pollution and make the overall transportation ecosystem safer.”

There are, doubtless, other, more sci-fi developments ahead. Ulster University, for instance, is developing a “biologically motivated, computational model” that could allow computers to think and act like a human, opening up wild new possibilities for self-driving cars. Volvo has plans to replace long-haul air travel by creating autonomous, electric ‘sleeper’ cars that whisk you across a continent while you snooze. Others have plans to leapfrog battery power and instead give us cars fuelled by hydrogen. That’s to say nothing of the ways in which governments might seek to restrict and manage the ways in which we use our cars, which could be the biggest driver of change of all.

How much of that comes to fruition is uncertain. All we know is that, in the next decade, the car will undergo its biggest changes since Herbert Austin put the clutch on the left.

The smart money is on connected devices

Tips to turn your home smart

How an app a day can keep the doctor away