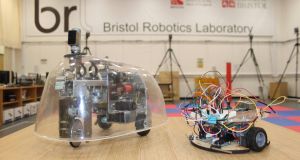 The Bristol Robotics Laboratory is working on projects in artificial intelligence.

At the Bristol Robotics Laboratory in south-west England, dozens of tiny metal machines are poised to dance over a shiny white surface in “swarming” experiments to track how they organise themselves and work together. The scene at the European Union-funded facility is an attempt to compete with the US and China in artificial intelligence (AI). The European Commission wants to create a network of hundreds of so-called Digital Innovation Hubs like the one in Bristol. The aim is to help Europe’s companies and scientists work together to boost research and the take-up of new technologies among the thousands of small and medium-sized companies that form the backbone of the economy.

“The idea is that all these nodes will connect and communicate with each other, maximising the impact of the technologies and expertise they develop,” says Farid Dailami, an associate professor who runs the prototype hub in Bristol, which connects researchers and funding with companies that need robotics. Europe already has two of the world’s largest robotics companies, ABB of Switzerland and Germany’s Kuka. Yet it has no vast internet platforms on the scale of Google or China’s Tencent Holdings to hoover up the data that underlie many current technological advances in AI.

The American and Chinese tech giants also have deeper pockets, allowing them not only to fund expensive research, but also to scoop up successful European start-ups. Kuka was bought by a Chinese company while Google acquired the UK’s budding AI star, DeepMind.

One problem is that despite efforts to build a digital single market, the EU’s 500 million-strong population is divided among 28 nations. Universities, funding and other networks that underpin research are disjointed.

China and its companies, by contrast, can mine the data of 1.4 billion potential customers in one market. Facebook alone has more than two billion users worldwide.

“Fierce international competition requires coordinated action for the EU to be at the forefront of AI development,” Andrus Ansip, the European Commission’s vice-president for the digital single market, said in a statement announcing the EU initiative. That situation is only likely to get worse after the UK leaves the EU next year.

Dailami says he had been told to continue business as usual for now, but it isn’t clear that EU funding will be able to add UK laboratories to its new network. Commission officials point to a vibrant European research environment, but worry when it comes to monetising those ideas. One example is mobile phones. European companies took an early lead, only to get locked out of the smartphone industry as non-European operating systems – Android and IOS – became industry standards. Of the more than 230 $1 billion-plus start-ups known as unicorns worldwide – the Googles and Tencents of the future – the EU has just 26, and half of those are in the UK. China, meanwhile, has 65 unicorns and the US 115.

The Commission’s solution is to inject more money to spur €20 billion of extra research funds for AI across the bloc: more vocational training; cheaper rights for companies to reuse the big data that Europe’s highly developed public sector collects through health, transport and other services; and a new network of research and business outreach hubs, modelled on Dailami’s operation in Bristol. The robotics facility is attached to the University of the West of England. Projects from the warehouse-style space include Tactips, a technology enabling robots to know what they are touching, and a robot Dailami’s team put together for a milk company. It can “see” and remove unwanted duckweed from cow pastures, boosting production.

Companies involved in R&D have had to change focus quickly

The coronavirus pandemic and implications for life sciences

Genuity pivot to focus their efforts on Covid-19 research

Academia and industry working together has clear commercial benefits