A problem that’s only going to get bigger

With the State pension age rising and the proposed auto-enrolment scheme delayed, the pensions industry faces a real challenge in persuading people to start saving for retirement 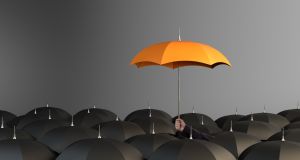 “Pension providers are often seen as old-fashioned and off-putting to younger people. There is plenty of scope for pension providers to change that perception. Photograph: iStock

Pension coverage remains stubbornly low in Ireland. According to the latest statistics from the CSO, only 56 per cent of workers in Ireland had supplementary pension arrangements in addition to State entitlements in 2018. That level falls to just 16 per cent for workers aged 20 to 24 and rises steadily to 70 per cent for the 45-54-year-old age bracket.

While the overall level of coverage has risen slightly in recent years, it has to be remembered that the 56 per cent figure includes public-sector employees and that means that more than half the population will be solely dependent on the State pension for their income in retirement.

With the State pension age rising to 68 and auto-enrolment pensions not coming for another three years at the earliest, most people face the prospect of working longer if they are to maintain their living standards in their later years.

The alternative, of course, is to start investing in a pension now but all efforts to persuade people to do that have met with only limited success up until now.

AIB head of retirement planning Tony Doyle believes the issue is going to become even more pressing. “It hasn’t been a very big problem up until now because the majority of people retiring owned their home and the State pension could sustain them,” he says. “The big problem coming down the track is the increased number of people who are renting. This is going to be a major issue in 25 or 30 years’ time.”

Jonathan Daly, head of retail distribution and propositions at Zurich Life Assurance, believes a change in approach on the part of both the pensions industry and the State is required to address the issue. “The biggest gaps in pension coverage at the moment are with lower-paid workers, younger workers and women,” he says. “Providers need to adopt a targeted approach to encourage each of those groups to start saving through a pension. For example, in relation to younger workers, providers could make much more use of social media to engage with younger workers, highlighting the benefits of having a pension as well as the tax relief which is available.”

Perception can be a problem

But perception can be a problem. “Pension providers are often seen as old-fashioned and off-putting to younger people,” he admits. “There is plenty of scope for pension providers to change that perception. We find that once a customer starts a pension, they usually stick with it so if we can get people to start a little bit earlier, that will have a big impact on coverage in the long term.”

Bank of Ireland is taking positive action to tackle the problem, according to head of pensions and investments Bernard Walsh. “Education is the critical part,” he says. “We recently launched a financial wellbeing programme and we have eight full-time advisers going to secondary schools around Ireland talking about it. Pensions is part of that, and we are trying to get young people talking about it early. We are also going to do it in third-level colleges and we do a lot of work with employers on pension education as well.”

Employers also need to step up to the plate. “We see people who are members of pension schemes all the time and the vast majority of them don’t know where they are invested or even how much is being put in on their behalf,” says Rob Meaney, head of responsible investments with Mercer Ireland. “Companies need to do a bit more and we work with employers who want to communicate more with their members.”

The introduction of an auto-enrolment pension scheme in Ireland will help, he adds. “That will be a very big thing. We have seen it already in the UK where it has been very successful, with millions of people starting pension savings as a result.”

The problem, however, is that the proposed start date of 2022 for the auto-enrolment scheme is looking increasingly uncertain following a consultation process during which the Government’s plan was fairly comprehensively shredded.

But that is no reason for delay, Tony Doyle contends. “The pensions industry has to get behind the Government in what it is trying to do with auto-enrolment,” he says. “We need to get the system up and running in as simple a way as possible, as soon as possible. We don’t need it to be perfect from day one, very good will do. The existing pensions infrastructure in the country is adequate to deal with it and a licensing system similar to PRSAs could work at the start. But it’s one thing to get the system up and running and another thing to get people interested and engaged enough to do something about their pension.”

Daly agrees. “There is a very positive message to tell about pensions, but the State often only talks about the boring and off-putting aspects of pensions. The State should also try to push ahead with the pension reform agenda and the introduction of auto-enrolment as quickly as possible. Auto-enrolment will transform pension coverage in Ireland, and the sooner it is introduced, the better.”

There is also the issue of personal responsibility. While we may bemoan delays to State-backed schemes or a lack of action on the part of the industry or employers to interest people in the topic, the fact remains that individuals also have a part to play.

“People need to start taking personal responsibility for it,” says Walsh. “If they don’t, no one else is going to pick up the tab for them.”

“People want a comfortable old age, it’s as simple and as complex as that,” adds Doyle. “But we have to take responsibility for our own future and our retirement savings. We can’t expect the State to provide for everything. And with life expectancy extending, people must take responsibility themselves.”

Very stark figures indeed and reason enough, if any were needed, not to wait for auto-enrolment and to get started on a pension now.