While the housing stock continues to increase to meet demand, issues of affordability remain 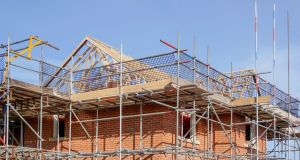 A total of 19,856 housing units were commenced in the first nine months of 2019. Photograph: iStock

While the news around housing supply may appear unremittingly bad, there have been some improvements in recent years in relation to new homes at least. Indeed, the latest research from the Banking and Payments Federation Ireland (BPFI) indicates that housing supply continued to grow in the third quarter of 2019.

Overall, some 7,600 housing units were commenced during the quarter, bringing the total number to 19,856 in the first nine months of 2019. The research also identified a trend in the market, with increasing numbers of first-time buyers choosing to buy in the Dublin commuter belt.

There is no stock of apartments out there. They’ve all gone to funds and that’s restricting supply

Savills’ head of new homes David Browne reports a busy year despite some technical glitches. “There have been issues with deliverability this year and this is causing delays in developments coming to market,” he says. “These delays are mainly to do with connections with ESB and Irish Water and so on.

“The first-time buyer market is well supplied with stock at the moment, with developments in Adamstown and other areas in Dublin coming to market. The mid-market is quite strong as well – right up to the €500,000 level, which is the help-to-buy limit for the €20,000 rebate. The Clay Farm development in Dublin 18 is doing very well, for example.”

There is an issue with apartment supply, however. “Most apartment sales this year have been to funds as opposed to being brought to market,” Browne says. “There is no stock of apartments out there. They’ve all gone to funds and that’s restricting supply.”

Overall, the outlook for new homes is very positive and affordability for buyers should improve over time

Clay Farm is a notable exception. “We sold 24 apartments there on the morning of the launch. There has been a build-up of demand for apartments in that €380,000 to €400,000 range. Park Developments has plans for more apartments for the open market in Clay Farm next year. We also have some more stock coming in Mount Merrion and Ballsbridge. These are very high-end developments. There is a lot coming but the market is a little bit unusual – there are fewer starter homes out there because there are very few apartments in that category.”

Browne is not surprised by the BPFI research results in relation to the move to the commuter belt. “The Central Bank lending cap is doing what it was intended to do,” he says. “It is holding prices at a certain point and this is having an effect. People are moving further from the city to areas where there is no public transport, and this is causing traffic problems. On the other hand, Naas, Maynooth and Leixlip are all hotspots for housing. You can live there and use public transport to get in and out of Dublin. They are also well served by schools and so on.”

A key issue, Browne believes, is land costs. “The issue we have for new homes is that the cost of land is high. Delays with planning also present an issue. Labour costs and materials are going up. It’s a difficult business to be in with prices being squeezed by the Central Bank limit. Overall, the outlook for new homes is very positive and affordability for buyers should improve over time.”

That’s a view shared by TCD economist Ronan Lyons, but with some caveats. “Supply seems to have caught up with demand,” he says. “Roughly speaking, we are producing enough homes each year for the number of households that can raise a mortgage. The owner-occupier segment in the Greater Dublin Area is pretty well served. As it stands, it seems to be in balance. But if you want to bring costs down and make new homes more affordable, you have to deal with construction costs, land prices and social housing policy.”

In that respect, he believes the Government isn’t really doing enough. “I worry quite a lot about the need to be seen to be doing something. Housing supply is going to respond reasonably slowly to any action. That’s not an easy sell. There is an element of limited thinking about it and the Government hasn’t been prepared to take bigger steps. They have been experimenting but not at the right scale. If you’re doing the right thing, you have to give it time to work. But what we have often seen is just tinkering around the edges to show they are doing something.”

Sherry FitzGerald Residential managing director Marian Finnegan believes the figures are not quite as straightforward as they first appear. “We are seeing an uplift in construction activity,” she says. “It went up from 14,000 to 18,000 last year. It might get to 21,000 this year but will probably be just over 20,000. But a quarter of those are self-builds on people’s own sites, another quarter are social housing, and only about half of them are going to the market. The latent demand that built up during the recession isn’t being met yet.”

She also sees increased demand in the Dublin commuter belt. “The mid-east is busiest at the moment,” she says. “That’s commuter land. The reason it has seen an increase in supply is because it is viable due to lower land prices. That means the houses can be sold to first-time buyers. But we have to make sure Dublin is not just being supplied by the commuter belt. But very few apartments are being developed for the market in Dublin. They are too expensive to build. They make sense for institutional investors to let because of the lower yields they seek. If we are going to get Dublin viable for new homes, we need apartments to be part of the solution.”

David Browne remains optimistic overall, however. “The future is bright for new homes,” he says. “And we always see increase in activity at the start of the year because a lot of people make decisions about buying during December. The banks come back into the market as they are able to use up their quota of exemptions to give higher loan amounts. This principally benefits first-time buyers.”