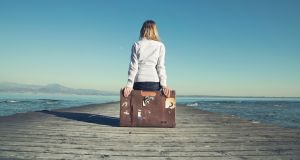 Once the initial euphoria of moving back home has passed, a person can experience feelings of boredom, rejection or even reverse homesickness for the country they left behind. Photograph: iStock

The reasons people emigrate are many and varied, be it for work, romance, or the sheer adventure, but a sense of nostalgia for “home” usually lingers. Of course, most expats who up sticks will have to deal with culture shock on some level as they adjust to the rhythm of their new home, in addition to making friends, finding work, learning a different language and so on. It can be stressful and lonely at first, but after a while it becomes the new norm and they start to feel part of their adoptive home.

The 2008 economic crash saw graduates and professionals alike leaving Ireland and heading overseas for opportunities, but as the economy has recovered in recent years more and more expats have felt the urge to come back, and the Government is actively making an effort to entice the diaspora home. Putting aside the logistics involved for a moment, coming back to Ireland after being away can be intoxicating on one level. It means reconnecting with family and friends, revisiting old stomping grounds and falling into familiar habits.

What some returnees may not consider is that after the initial euphoria has died away, home isn’t quite the same place anymore.

Anyone who’s spent time overseas can relate to the anxieties of finding somewhere to stay, setting up a bank account, dealing with car insurance and the myriad small stresses that crop up. Returnees don’t expect to relive all that once they’re back on home soil, especially if they’ve only been away for a year or so. The expectation is they’ll arrive and pick up where they left off, but a lot may have changed in that time and a kind of reverse culture shock can set in.

Psychotherapist Ishita Sangra defines RCS as “. . . the experience of facing previously familiar surroundings after living in a different environment for a significant period of time. It is the process of re-tuning, re-understanding and re-absorbing into one’s own home culture after living in a different culture for a significant period of time.” Whether the return is borne out of financial, legal or family reasons, the first month typically comes with a sense of hope and excitement. Once this period passes, however, a person suffering RCS can experience feelings of boredom, rejection or even reverse homesickness for the country they left behind.

“Once the honeymoon period is over, the person might become aware that things have moved on since they lived here,” says psychotherapist and counsellor Patricia Therkelsen. “They may be unfamiliar with the social norms and feel awkward or out of place, leading to feelings of isolation. They might begin to feel insecure and suffer social anxiety, perhaps become depressed.”

Stresses over work and accommodation can contribute to these feelings, which can be further intensified if expats are returning with a spouse or family. In much the same way people make a plan before leaving for a new country, the key to transitioning back to Ireland is to apply the same rules – in essence, think of it as a fresh start.

‘Plan, plan and plan some more’

If there’s one recurring piece of advice to returning emigrants it’s to be well prepped. Patricia Therkelsen suggests “that prior to returning, expats plan, plan and plan some more”. Not only is this key to making the return a success, but it will help reduce the potential impact of RCS. “The key to good mental health is to know yourself. Understanding what you need to be happy is a good start and awareness of the pitfalls regarding this move will help in avoiding them.”

Start with reconnecting with friends and colleagues on social media, before researching jobs and accommodation. Ideally, it would be good to have work leads or interviews lined up before coming back, while sites like Daft.ie or Just Landed are a good place to start home-hunting. Dublin is a thriving hub when it comes to work, but ever-rising rents and cost of living can make it a miserable place for flat-hunting. Returning parents will also need to start looking into schools immediately.

Some of the logistics involved with the move can be alleviated with a relocation service. Ciara Shaffrey, managing director of relocation service Settle In, has lived in America, Germany and France, and knowing the struggles involved she’s able to cater to the needs of returnees and new arrivals alike.

“I do a one-to-one needs engagement assessment with all my clients and their families – often they may come for a look-see visit, which is a personalised tour around Dublin and gives an overview of different areas and housing prices, distance to work, what is there to do in the area etc.” This overview also includes “the practical information you need on transport, health insurance, medical and dental affairs, utilities, banking and other services that are essential to making you feel at home in Ireland”.

Also be sure to research accounts of those who’ve made the move, as their advice will be invaluable. For example, Crosscare Migrant Project released a report in 2017 after interviewing 400 returnees on their experiences; many cited red tape, bureaucracy and accommodation as major hurdles, while stressing the importance of having realistic expectations and being mindful of mental health.

While having a plan is a key to reintegrating, what’s just as important is being honest about how you’re feeling. Bottling or repressing negative thoughts won’t help, so opening up with family, friends or a spouse is crucial. Taking the time out to have a little fun won’t hurt either. “A part of you already knows that returning to your home country is going to be stressful,” says Ishita Sangra. “Think about the stress-relieving techniques that will help you in combating the stress, ie exercises, diet, organising yourself etc.”

Kevin Keelan from Dundalk spent nine months at the University of Notre Dame, Indiana, US, in 2013, taking courses on American politics, foreign-language pedagogy, while also teaching Irish. While initially nervous of the move, the welcoming community soon helped him feel at home. “It was a fantastic and exciting experience. Initially, of course, it took some time to get settled in but I never felt homesick to the extent that I wasn’t enjoying my time there.”

Despite being gone less than a year, the return home felt strange at first, and he experienced some homesickness for Indiana. “Because I was living in a bubble in a US college, it took a small while to readjust to life back at home. Although it was nice to be home again, given that I was totally independent abroad, there came a time where I sort of wanted to be living on my own again. I had nothing lined up in terms of work as such, and I was going back to college so I felt like there was a bit of a lull.” Catching up with loved ones and keeping active was crucial to overcoming that mood dip. “Playing GAA again with my local club certainly helped, and being back around family and friends was great.”

The most important thing to keep in mind about RCS is that – just like culture shock itself – in time it will pass. Stick to the pre-arrival plan, stay active and healthy, be honest with yourself and others about your feelings, and finally, just enjoy being home.