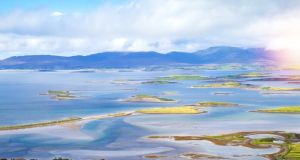 Of course every day is Mayo Day when you holiday there and there’s reason not to do that 365 days a year, given that the county has 1500km of coastline

The May Bank Holiday is rapidly becoming the Mayo Bank Holiday, thanks to the success of the Mayo Day festivities.

The massive celebration of all things related to Mayo, which takes place this year on Saturday May 4th, is now in its fifth year and well cemented in the national calendar of fun events.

It’s even gone international, with community events organised by people with Mayo links in the UK, US and further afield.

“Mayo Day is a celebration of ‘Mayo-ness’ in Mayo communities worldwide that has grown from strength to strength over the last five years. Across the May Day weekend, Mayo people at home and away have an opportunity to celebrate all that is great about their progressive, can-do county,” says Martina Hughes of Mayo county council, which dreamt up the event.

“This day is an opportunity for business, communities, families and individuals to celebrate who we are and where we come from, a day in the calendar year that recognises Mayo and its people.”

It’s such a good idea you wonder why every county doesn’t have one. “Mayo Day is a unique initiative in that it is the first and only annual festival that celebrates the achievements, heritage and culture, diaspora and community spirit of a county,” she says.

The population of Mayo stands at slightly more than 130,000 but its diaspora is a multiple of that. The emigration endured over generations has ensured there are now Mayo roots all around the globe.

“Mayo’s boundaries spread far wider than its county boundaries. It is estimated that there are 3.5 million people around the world with Mayo origins. We feel there is something unique and special about Mayo people, and not just when we get to Croke Park. Put it this way, when we are abroad we all feel a loyalty as Irish. When you are from Mayo you feel that loyalty to Mayo,” says Hughes.

The council launched the first Mayo Day event in 2015, “not quite sure what it would evolve into”, she says. “Year on year it has grown to the point that different events around the world take place to mark it.”

Social media helps. “Every year #MayoDay trends on Twitter and a couple of years back we produced a really emotional social media video about Mayo which had 44 million Twitter impressions.”

We are seeing businesses, schools, communities and just people generally all coming together to celebrate who they are and where they come from

All this attention helps the council meet its aim to promote the county as a great place to live, visit and invest in and the people of Mayo have responded with gusto. “We are seeing businesses, schools, communities and just people generally all coming together to celebrate who they are and where they come from,” says Hughes.

This year sees the launch of a new theme for Mayo Day: The Mayo Word. “It’s a recognition of the fact that we have so many writers and poets. We also have a former Taoiseach, and even the current head of the Defence Forces is from Mayo,” she says.

“Mayo writing has never been so relevant and the Mayo Word will honour and celebrate these achievements, along with many others,” says Hughes.

In a new departure this year a limited-edition Mayo Day GAA jersey will be worn by Mayo’s footballers for their first-round championship game against New York in Gaelic Park on Sunday 5th May, as part of the celebrations.

At home the flagship event for Mayo Day is the festival taking place at the National Museum of Ireland Country Life at Turlough.

Musical acts include Mayo’s own Lisa Canny as well as Keywest, Cronin and The Hit Machine Drummers. Expect ceol, damhsa agus plenty of caint at the Gaeilge Mhaigh Eo Area, too.

As you’d expect from a county that has its own Gourmet Greenway, there’ll be treats to eat, including a food village with stands from local producers such as Noo Chocolates, woodfired pizza from The Fire Slice and Mac & Spud’s mackerel and fried potato dishes. Kelly’s of Newport Butchers will be on hand too, famous for its fry-up fare.

The Made of Mayo Craft & Design showcase will be back this year, a great opportunity to buy works from the county’s premium artisans and designers. This year includes limited edition artwork from Saileen D’Art, hand forged ironwork and sculptures by Iron Excellence, wall art from Divas by Dee plus handmade violins and other bowed instruments by Kevin Sykes.

Of course, every day is Mayo Day when you holiday there and there’s no reason not to do that 365 days a year, given that the county has 1,500km of coastline, loads of Blue Flag beaches and is at the heart of the Wild Atlantic Way.

Not alone is it the home of the country’s first Greenway, from Newport to Achill but it has a Gourmet Greenway and even a Blueway, a kayak and snorkel trail, as well.

Mayo is also home to cultural heritage destinations such as the Monasteries of the Moy trail and the ancient farmlands of the Ceide Fields, as well as urban delights such as historic Westport, one of the best known planned-towns in the country.

Whether it’s a fun-filled day at the Pirate Adventure Centre at Westport House, climbing Croagh Patrick, surfing Achill Island or relaxing over coffee and a cake at Foxford Woollen Mills, there’s something for everyone here.

Or just sit back and soak in the scenery. There’s no end of it – just ask the locals: “Probably the most amazing drive is from Mulranny via the Currane and on to Achill sound. It has to be the most incredible scenery ever. Take a picnic and absorb the view; it’s wild romantic Mayo at its best,” says Audrey Lynnott of the Mulranny Park hotel, which overlooks Clew Bay.

There’s no end of great accommodation options in Mayo, including Mount Falcon, a luxury Victorian manor house hotel in Ballina which offers woodland, lakeside and courtyard lodge options too. Stay at Hotel Westport for ease of access to historic Westport House, which it owns, and its Pirate Adventure Park, a firm family favourite.

Wherever you go, you’re not far from one of the county’s unrivalled beaches. “There are few destinations in Europe to match the quality of Mayo’s beaches, from Ross Strand in Killala to Bertra and Caramore in Louisburgh, Keen Bay in Achill, to the Islands of Clare and Inishturk,” says Sonia Higgins of Hotel Westport. “There are some hidden gems off the beaten track too but we cannot give those away - you’ll have to explore for yourself.”

What’s on in Mayo